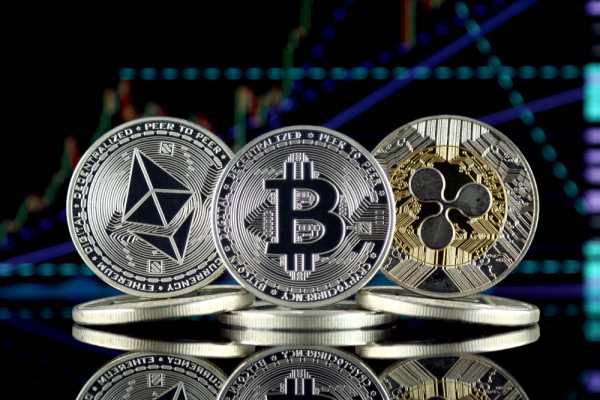 For a market fearful that the Fed will dive headlong into taking interest rates to outright restrictive territory in early 2023 (ie above 3.0%), this appears to have come as a relief, hence the benign market reaction.

Sadly for the crypto bulls, (modest) upside in equities and (modest) further downside in bonds and the US dollar has not been enough to lift crypto sentiment. Indeed, total cryptocurrency market capitalization briefly fell to its lowest level in more than two weeks under $1.20 trillion on Thursday.

At the time of writing, total crypto market cap is around just under $1.21 trillion, down nearly 3.0% on the day. Admittedly, recent downside doesn’t represent a convincing bearish breakout below recent $1.20-$1.35ish trillion ranges.

In the immediate future, so long as this week’s macro trends continue (ie gradually rising stocks, falling yields, and a weakening US dollar), cryptocurrency markets are expected to remain supported within recent ranges.

Aside from the potential for more cryptocurrency regulation chatter at the final day of the World Economic Forum and a speech from Fed Vice Chairwoman Lael Brainard later in the day on central bank digital currencies, crypto traders will mostly be focused on US economic data.

The second estimate of US GDP growth in the first quarter of the year will be released at 1330BST, ahead of the release of US April Core PCE inflation data (the Fed’s favored inflation gauge) on Friday.

Analysts have warned that economic data presents two-sided risks to stock and crypto markets at the moment. Firstly, if data signals are weaker than expected US economic growth and triggers recession fears, that could hurt risky assets (like crypto and stocks). Bulls will be hoping that US Q1 GDP data, which is already expected to show a contraction in the size of the economy last quarter, doesn’t receive any negative revisions.

Secondly, lots of analysts have been talking about how they think inflation has peaked and should Friday’s Core PCE report support this narrative, this could trigger some relief risk assets as traders wind in their hawkish Fed bets.

Bitcoin is holding up better than the broader crypto market on Thursday and was last only down about 1.0% in the $29,200 region per token, leaving it still well within recent $28,750-$31,400ish ranges. That means bitcoin maintains a market cap of around $550 billion.

Ethereum, by contrast, was last trading over 5.0% lower on Thursday in the low $1,800s per token, having broken below recent support at the $1,900 level. The recent break lower appears mostly technical, with the cryptocurrency having formed something of a descending triangle in recent sessions (which often precedes bearish breakouts).

ETH/USD is now eyeing a test of monthly lows around the $1,700 level. The world’s second-largest cryptocurrency currently has a market cap of around $220 billion.

Other altcoins have also been suffering. The likes of Binance’s BNB, Cardano’s ADA, Polkadot’s DOT and Dogecoin were all last down in the region of 6.0% over the last 24 hours, CoinMarketCap data on Thursday suggested. Solana’s SOL was last down about 10% over the same time period.

As a result of altcoin underperformance, which is reflective of risk-off flows or a so-called “flight to quality” within the crypto space, bitcoin’s crypto market dominance jumped on Thursday to above 46%, its highest level since October 2021.

Major US investment bank JP Morgan is bullish on bitcoin in the short and long-run, analysts at the bank said in a note released on Wednesday. Strategist Nikolaos Panigirtzoglou said that the bank thinks the cryptocurrency’s fair value in the short-run is around $38,000, around 28% higher than current levels under $30,000.

Back on 16 May, Terraform Labs CEO and Terra blockchain founder Do Kwon proposed a so-called “Revival Plan” which would see the creation of a new Terra blockchain that wouldn’t be linked to an algorithmic stablecoin. The proposal (Proposal 1623) to create Terra 2.0 was approved on Wednesday by the Terra community by 65.55%.

LUNA tokens on the new Terra blockchain will be allocated to holders of LUNA and UST in an airdrop according to two snapshots, the first prior to Terra 1.0’s collapse at 14:59:37 UTC on 7 May and the second after the collapse at 19:59:51 Beijing time on 26 May.

The genesis of the new Terra 2.0 blockchain will occur on 27 May. Various crypto exchanges (including FTX, KuCoin and Binance) have been lining up to say they will work with Terra to support the migration and airdrop, as well as support trading in the new LUNA token.

On Wednesday, Portugal’s Congress rejected two opposition-sponsored bills that sought to put a tax on cryptocurrencies. The country’s ruling Socialist Party, which holds a majority in Congress, is yet to submit its own proposal for the taxation of crypto after the Portuguese Finance Minister Fernando Medina said that new tax plans would be coming in the near future.

Circle Interest Financial, the issuer of the world’s second-largest US dollar-backed stablecoin by market cap (around $53.4 billion) USDC, sent a letter to the US Federal Reserve on Wednesday arguing that it should refrain from the creation of its own digital dollar . “A host of companies, including Circle, have leveraged blockchain technology to support trillions of dollars of economic activity with fiat-referenced stablecoins,” the company said, adding that USDC is already fulfilling “many of the potential benefits” of a central bank digital .

“The introduction of a CBDC by the Federal Reserve could have a chilling effect on new innovations,” Circle continued. Moreover, the company argued that USDC supports the US dollar’s position as the world’s leading reserve currency.

In further international regulatory news, Paraguay’s lower house of its legislative body approved a modified bill that will regulate the country’s crypto mining and trading industries. The bill will now return to the country’s Senate with modifications and, once approved, will go to the executive branch for approval. Paraguay’s government hasn’t yet signaled whether it plans to sign or veto the bill.

One of the authors of the bill last year told various members of the crypto press that the aim of the legislation is to attract international crypto miners to the country, given it has amongst the cheapest electricity rates in all of Latin America of around 5 cents per kilowatt-hour.

Elsewhere, Thailand just approved a 7.0% VAT exemption on cryptocurrency transactions through exchanges that is set to last into 2023. Meanwhile, Binance is reportedly working with Kazakhstan to help develop a legislative and regulatory framework.