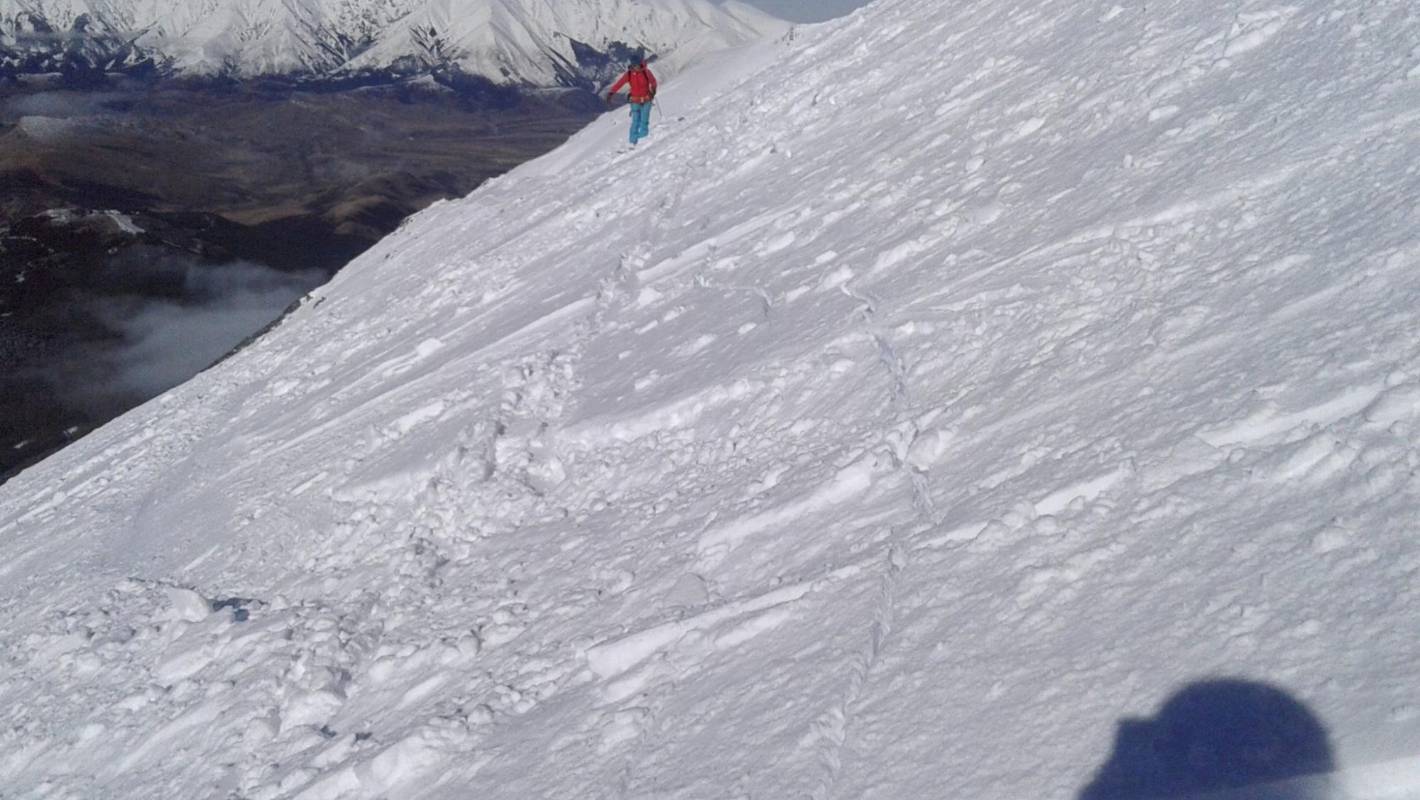 Avalanche work was carried out at Broken River ski area after a crack was discovered in the snow pack.

Skiers were taken off a Canterbury skifield because of the avalanche risk after a 30-metre crack ripped across the snow.

The crack, which was about 90 centimeters deep and 5cm wide, went across the main basin at Broken River Ski Area in the Craigieburn Range on Sunday.

It came as experts warned of a “high” chance of destructive avalanches across the Craigieburn Range after last week’s storm brought a major snow dump.

A crater can be seen in the snow after explosives were used to check the stability of the snow pack at Broken River ski area.

Broken River marketing officer Claire Newell said the crack appeared across the main basin around lunchtime. Staff closed the main tow area as soon as it was reported.

“Once the field was closed the safety staff released some explosives, which would have dislodged any loose snow,” Newell said.

The explosives did not trigger any movement and the snow pack was deemed safe, she said.

About 300 people were on the field on Sunday, according to a post on Broken River’s Facebook page.

One witness said as many as 100 people would have been “in the firing line” had the crack triggered an avalanche.

Newell said the stability of a “snow pack” was determined by layers of different types of snow.

“Because the initial snow we got in late June was very crystallized it has provided a very slippery layer … at the bottom of the snow pack … so anything on top of it has the potential to slide.”

Newell said the conditions were unusual for the club, “but we are always monitoring these things and remain on high alert”.

Staff dug snow pits daily to assess the snow pack and “find out which layers might be weak”.

The skifield was open to the public on Monday and remained open the following days.

In August 1992, Neville Ryde died after a 40,000 ton avalanche struck Broken River ski area. The ski field was open and conditions were clear when the avalanche traveled more than a kilometer down the main basin of the field.

Craigieburn Valley and Mt Olympus ski areas were closed on Wednesday. Mt Cheeseman was open and club president Cam Lill said there was no avalanche risk at the ski area.

“We monitor the snow pack every day and the [avalanche] warnings are taken into consideration.”

There was “a high danger for a skier or rider to trigger a persistent slab avalanche at some upper elevations”.

A persistent slab avalanche is when a layer of snow breaks away from an underlying layer. Often there is no visible sign of danger before it is triggered.

They could occur on relatively flat slopes down to 20 degrees or less, MSC said.

While this warning was in place, skiers were advised to avoid steep terrain of more than 30 degrees on all southwest through northeast faces.

“It remains very likely that a skier or rider could trigger a large destructive avalanche in the back country.”

Such an avalanche could become “very wide”, MSC said, “making the chance of escape or survival almost nil”.

Multiple large avalanches were seen in the Craigieburn area before the latest storm came across the South Island.

“Many of these occurred naturally, some were triggered by single skiers.”

On Sunday, Mt Olympus Ski Patrol staff set off several large avalanches with explosives while testing snow packs for stability, according to the Avalanche Advisory website.

Top Updates From The Solana Ecosystem