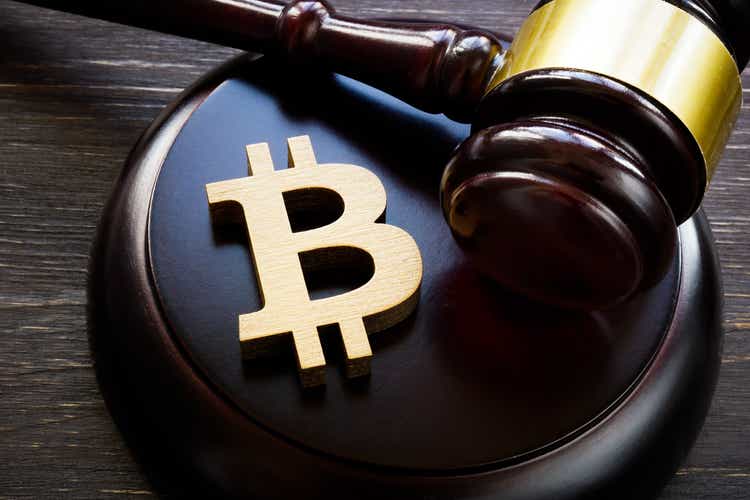 There have been some significant changes over the years in regard to Bitcoin (BTC-USD), with the early adopters primarily considering it to be a store of value, and those later to the game have been treating it the same as a high-growth stock in relationship to how to trade it.

In the early years it was primarily retail investors taking positions in Bitcoin, while in recent years it has been institutional investors and high net worth taking big positions in the flagship cryptocurrency.

For years the price movement of Bitcoin decoupled from other asset classes, as HODLers refused to sell because of their belief in the price of Bitcoin, over time was going to explode into the high 6-figures, and possibly to 7-figures.

In this article, we’ll look at how that worked in the early years of Bitcoin adoption, and what has changed since then as a new type of investors entered the market.

As mentioned above, early adopters were, for the most part, retail investors that saw Bitcoin as a store of value that would surpass all other assets that were considered a store of value, including gold.

They would HODL, and still do HODL, which when the price of Bitcoin started shooting up in response to growing interest, would result in scarcity, reinforcing the upward trajectory of the price, which of course was substantial when the bulls were in charge.

One question that needs to be asked and answered is, if Bitcoin was such as solid store of value, why did the price plunge in obvious response to sellers selling their positions? The answer is, just because there were a significant number of investors HODLing, doesn’t mean there weren’t some that were glad to take their profits and run.

Another factor was many people were hit by FOMO, and in response started buying near or at the top, when the price started reversing direction, they would panic and sell; These were people with more of a herd mentality than those that actually studied and understood the potential Bitcoin represented. This is different than what is happening today as a result of institutional investors taking positions in Bitcoin, even though the drop in the price of Bitcoin is the same.

When those outside of early adopters started to realize Bitcoin was for real, they started to take an interest in the new asset class and invest a significant amount in it.

The one thing that they brought to the table, which I believe is misguided, is they lumped Bitcoin together with other tech or high-growth stocks, and consequently, when the economy worsened and the Federal Reserve announced it was going to raise interest rates to combat inflation, institutional investors started to sell off.

What happened here is institutional investors use what is called a DCF model to estimate future profits. At the basic level what this means is as interest rates rise, margins and earnings will start to fall, so they readjust their future outlook on high-growth stocks.

The problem as I see concerning using the DCF model, is Bitcoin being lumped together with high-growth stocks as if they’re in the same asset cast. It’s my opinion that Bitcoin and cryptocurrencies are an entirely new asset class and need to be traded as if they are.

Having said that, for now it doesn’t matter. Institutional investors are in control of the price of Bitcoin at this time because of how they’re treating it, and even if you agree with my assessment, the fact is, for now, the price movement of Bitcoin is being determined by the big players .

What the battle’s all about

When I talk about the battle between early adopters and institutional investors, I mean that there are two different ways of looking at Bitcoin, and how it’ll be held and/or traded in the future will be determined by what emerges after the Federal Reserve is done increasing interest rates as result of inflation coming down to the targeted levels.

Afterwards, as Bitcoin is further adopted, will new investors taking a position in it consider it a store of value, or will they lump it together with high-growth stocks?

My thought on that is that Bitcoin will once more be embraced as a store of value. The reason why is demographics. Millennials are the primary investors in Bitcoin, and they are very familiar with it and favorable as to its potential as an alternative to the US dollar and gold. Over time, they will dominate the direction Bitcoin takes. That direction will be a store of value, and possibly, depending on the implementation of the Lightning Network, a way to buy goods and services on a daily basis.

For the purpose of this article, I’m not going to do a deep dive into the Lightning Network. As most my readers know, it’s designed to significantly increase the transaction speed of Bitcoin when it’s being used to acquire goods and services at the point-of-sale.

The reason I’m bringing it up here is because there are those in the Bitcoin community that believe this will be a larger catalyst than a store of value has been.

There aren’t as many investors that consider this to be the primary catalyst for Bitcoin, but when the Lightning Network is more readily adopted, and some major retailer or service company starts to increase sales in response to customer preference, it’s easy to see companies Scrambling to include Bitcoin as an option to fiat. If and when that happens, the price of Bitcoin could take off to levels even the most ardent bulls couldn’t imagine.

I’m bringing this up to show that there is a third, significant element in the Bitcoin narrative, but it’s not going to be an immediate factor in how investors evaluate Bitcoin in the near term.

The reason why how Bitcoin is viewed is important is because different types of investors will hold or trade it based upon that determination.

If it’s viewed as a separate asset class, it’ll primarily be considered a store of value, which eventually will decouple from other asset classes, as it has in the past, and once again start another bull run that will, in my opinion, break past highs, almost certainly by a large amount.

As for institutional investors, they’ll come back in again when the economic conditions are favorable, and when they do, they’ll be a strong catalyst for the rebound in the price of Bitcoin.

The difference will be, Bitcoin will decouple again and soar past the high-growth stocks the large players will also return to, according to my thesis.

The bottom line is we have to be careful not to be scared out of our positions in Bitcoin and regret if for years. Bitcoin is here to stay. It’s still in the early years of its growth cycle, as measured by the pace the Internet grew at when started to be embraced by the masses, and once the Federal Reserve is done with its interest rate hikes and inflation falls, I believe we’ll see a Bitcoin bull market that will soar far beyond what we’ve already seen.

And even if the institutional investors were to maintain control of the price movement of Bitcoin for years, the good news is investors will still enjoy a big upward movement in the price, even if it were to fail to decouple from other high-growth assets.

I don’t believe that’s how it’ll work out, but when it’s heads you win and tails you win, all that is left to know is how big the rewards will be.

Will Ethereum take a turn for the worse in Q4 due to The Merge?