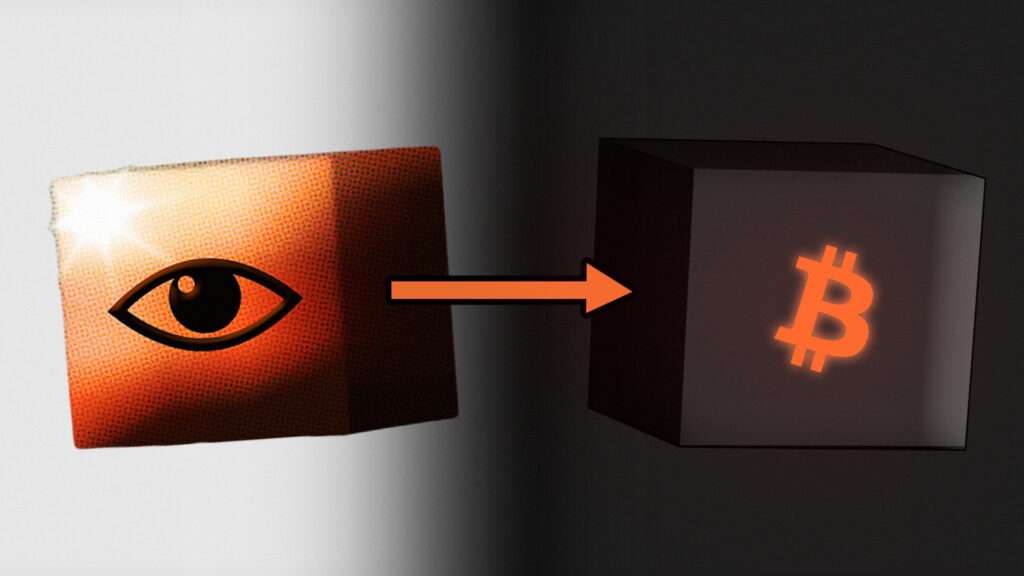 Bitcoin’s true believers hold on through the wild price swings because they see enormous value in its properties as a currency with a fixed number of units that can’t be inflated by a central bank and its “uncensorability,” meaning no government or corporation can prevent one party from sending value to another no matter the reason.

“We support [bitcoin] because we’ve seen a need from dissidents under authoritarian regimes for it,” says Alex Gladstein, the chief strategy officer at the Human Rights Foundation and author of Check Your Financial Privilege: Inside the Global Bitcoin Revolution.

Gladstein sees bitcoin as a tool of liberation—especially for people living under oppressive regimes around the globe. Activists, dissidents, and human rights workers often face prosecution by hostile regimes for receiving money from foreign sources.

“They need to receive earnings from abroad in a way that can’t be easily traced. That’s impossible to do using the banking system, but it’s quite possible to do with bitcoin, and we’ve seen it happen,” says Gladstein.

Bitcoin proved hard to stop in Canada. Prime Minister Justin Trudeau declared a state of emergency after truckers parked their rigs outside the national capital and blocked a border bridge in protest of the government’s vaccine mandates and other COVID-19 restrictions.

His administration ordered financial institutions to freeze donations flowing into the truckers. But hundreds of thousands of dollars worth of bitcoin still got through.

As one bitcoin activist involved in the fundraiser told Reason in March: “Here’s the thing with bitcoin versus [government-issued fiat money]: Fiat, you can confiscate first…with bitcoin, you have to go through the process of trying to confiscate funds before you actually take possession of them. And that asymmetry, it gives you the high ground as a defender.”

This man, who requested anonymity and who we’ll refer to as “Caribou,” was involved in organizing a bitcoin-based fundraiser called Honk Honk HODL, which raised more than $1 million USD worth of bitcoin on behalf of the truckers, about two – Thirds of which got through to them.

“[Bitcoin] actually makes the law have to work first before action is taken,” says Gladstein, who pointed out that the Canadian government simply froze money raised by more traditional crowdfunding sites.

“They were able to just freeze it with a phone call or a button click…But with bitcoin, they can’t do that. So they have to literally file an injunction. They have to use police officers. They have to go to people’s homes,” says Gladstein. “It makes the government do the work…which is really important.”

Bitcoin may be as hard to stop as cash, but it has a major limitation that makes it far less useful to political dissidents: After the fact, it’s not hard to uncover the real identity of someone who has sent or received bitcoin.

All bitcoin transactions are recorded in a public ledger called the blockchain. At first glance, all the blockchain appears to reveal are movements between user accounts—called bitcoin wallet addresses—assigned long strings of letters and numbers. But governments have grown increasingly skilled at connecting those pseudonymous addresses to actual people.

US law enforcement has used what’s called “chain analysis” to unmask drug dealers who transacted in bitcoin, and police recently arrested someone in Florida for selling logins to streaming services and ride-share apps for bitcoin.

The Canadian government froze hundreds of thousands of dollars worth of bitcoin intended for the truckers after the fundraisers transferred it to a local nonprofit that was under surveillance, and police raided the home of the campaign’s lead fundraiser to confiscate his computer.

But advocates say many of these problems are temporary and that many privacy tools already exist that would protect bitcoin users. They just need wider adoption.

For instance, Gladstein says that the Canadian fundraiser could’ve set up what’s called a BTC Pay server, which generates a new virtual address recorded to the blockchain every time someone sends bitcoin.

“With the Canadian truckers, we see how governments can take away money, but more importantly…[that] once [control over] money is in the hands of government, they have shown with 100 percent certainty that that monetary control will be abused,” says Craig Raw, a software developer and entrepreneur who created Sparrow Wallet, a privacy-oriented bitcoin wallet. Wallets are applications for keeping track of the secret passwords required to transfer bitcoins.The Honk Honk HODL organizer told Reason that he would have used Sparrow Wallet if he had to do it all over again.

“I think [the trucker protest] woke people up to the idea of ​​maybe we need to have some funds, at least, that the government can’t just freeze, that we have access to no matter what,” says Raw.

Integrated into Sparrow Wallet is PayNym, another tool for creating different payment addresses for every transaction, throwing off the sleuths.

Are these privacy-preserving tools illegal? Generally, they’re not, just as long as there’s no third-party service involved. In April, the feds seized bitcoins valued at $34 million from an individual in South Florida accused of selling stolen passwords, whom they caught by connecting his online profile to an address previously listed to receive shipments.

The suspect was charged with money laundering for using a so-called mixing service that exchanges bitcoin for other bitcoin to throw off the trail.

But Gladstein says a more decentralized option known as a “CoinJoin” would be much more difficult to define as “money laundering” under current US law.

CoinJoins, which are built into Sparrow Wallet, combine lots of bitcoin into one and then break them back into pieces, so it’s hard to figure out whose money is going where.

“I think the best analogy for it is like smelting gold,” the developer behind the Samourai Wallet, who asked to be identified as “Samourai,” told Reason. The company created Paynyms and their own coinjoin protocol called Whirlpool.

A front line in the bitcoin privacy arms race is developing the Lightning Network, which is a decentralized payment network for bitcoin. The bitcoin network itself can never scale to the size of Visa or Mastercard because every transaction needs to appear on the blockchain, and if there were too much data stored on this public ledger, it would become too unwieldy for users all around the world to maintain a constantly updated copy, which is what makes the network decentralized and thus highly resistant to government control in the first place.

The Lightning Network was designed to extend bitcoin’s capacity almost infinitely. It’s analogous to a bar tab, in which lots of small purchases are added up and combined into one transaction at the end of the night. But it also enhances privacy because, like with a CoinJoin, chain analysis firms can’t easily untangle what transactions were included in the bundle.

“You might have a Cash App or Coinbase account or something [that] the government knows about it, and you have income coming in. But then you withdraw into the Lightning Network, and you get that same degree of privacy, ditto with deposit,” says Gladstein.

There are cryptocurrencies specifically designed to anonymize transactions, such as ZCash and Monero, both of which use “zero-knowledge proof” encryption, but Raw and Samourai have focused their attention on bitcoin because it has wider adoption, a larger network, and is more decentralized.

An unsolved problem is that all of these privacy-preserving tools require that users maintain custody of their own bitcoin, which requires some technical savvy. It’s much easier to store your bitcoin on an exchange like Coinbase, which requires you to upload an image of your driver’s license to comply with a federal anti-money laundering regulation called “Know Your Customer,” or KYC. Samourai isn’t available for iPhones, and Sparrow Wallet doesn’t exist yet for mobile at all, greatly limiting adoption potential.

Samourai says that using bitcoin anonymously might be more difficult but that it’s the raison d’être of a technology rooted in the privacy-obsessed cypherpunk movement of the 1990s.

“That [cypherpunk] message has gotten diluted as the years have gone on,” says Samourai. “But at its root, [bitcoin is] a cypherpunk tool to route around the state. And it’s only useful if we use it that way.”

Raw says that the biggest privacy boon for bitcoin would be a protocol change built into the network itself that combines transactions automatically—in effect, making CoinJoins the default.

“It’s one of those things that everyone in the privacy bitcoin world has their eye on. So that’s, for me, the most important thing that I would hope for in terms of the future,” says Raw.

Gladstein says that in a world where entire countries like Russia are being cut off from the global financial system, bitcoin’s privacy and uncensorability are more vital than ever before and that privacy-preserving tools can make bitcoin more like cash.

“It gives people the option to have freedom money,” says Gladstein. “Yes, the government will know all the ins and outs of what the flows are coming in and out, but they won’t know what you do with it when you leave. And that, that allows us to preserve the privacy of cash, which I think is essential for democratic society.”

It’s not always easy being a bitcoin HODLer. This past year, the world’s most widely held cryptocurrency lost more than half its value, down 70 percent from its all-time high of about $69,000 USD.

But the true believers say it’s still early days and that eventually the price will catch up with the tremendous value that a fixed supply, censorship free, and, ultimately, private money brings to the world.

“Why should the government be able to see everything that we do from a transactional point of view?” says Raw. “It’s a very Orwellian world where all of that stuff is just available…So really, I’m just trying to put technology out there that allows people to transact in a private way.”

A Guide to LTC Crypto • What is Litecoin, How to Buy?