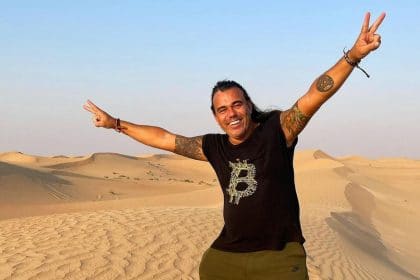 Didi Taihuttu said that his family continues to add more BTC during this recent price correction and expects the BTC price to touch $140,000 by 2025.

The popular Bitcoin Family is down more than $1 million on their BTC investments with BTC entering heavy correction this year. As of now, Bitcoin (BTC) is trading at $19,000 levels with a market cap of $364 billion.

Popular as Bitcoin Family, Didi Taihuttu, his wife and three daughters liquidated all their possessions, house, and everything to buy Bitcoins back before the 2017 bull run. Back then, BTC was trading at less than $1,000 per coin. Over the last five years, the Bitcoin Family have been trading BTC by selling their holdings at a higher price and buying them when they seem attractive.

While Bitcoin continues to trade under pressure, the Bitcoin Family is buying now. Speaking to CNBC, Taihuttu said:

“I’m buying bitcoin daily. For me, the lesson I learned in the last two cycles is – when the whole world is freaking out and when everybody is thinking that bitcoin will crash, I am slowly zooming out, and I’m buying bitcoin. That’s the bitcoin life”.

The crypto market has been going through a very rough phase with severe liquidations and insolvencies. Amid massive withdrawals, exchanges also have been facing huge liquidity crises. Bitcoin has already dropped 70% from its all-time high in November 2021.

Even during the previous bear cycle of 2018, the BTC price had corrected 80% before bouncing back once again.

Taihuttu further called this the ultimate Bitcoin buying moment. As per his chart analysis, Taihuttu believes that Bitcoin could bottom somewhere between $15,000-$20,000. However, he also expects the BTC price to top $140,000 by 2025.

Taihuttu said that he has generated 2000% profits with his strategy in the last six years. “Slowly, people will understand that being in bitcoin and HODLing is more profitable than always trying to catch that altcoin that will go times thousands,” he added.

Taihuttu also explains his 70/30 rule of Bitcoin investments. He said that he puts 70% of his BTC holdings in a cold wallet. The rest 30% is in hot wallets allowing them easy access to their tokens. “Every time our capital increases, I make sure that 70% is on the cold storage, so then I’m not able to touch it from there,” Taihuttu explained.

Taihuttu keeps the 30% crypto stash either in BTC or in stablecoins such as USDT or USDC. The Bitcoin Family has traveled to over 40 countries all these years and finally decided to put stay in Portugal due to its 0% Bitcoin tax.

The Taihuttus are currently running a Bitcoin bar on one of Portugal’s most popular beaches in Lagos. He’s also spreading the Bitcoin word to all retailers across the beach and teaching them Lightning payments. “I think it will take me about six months, and I will have this whole beach accepting bitcoin,” he said.

Bhushan is a FinTech enthusiast and holds a good flair in understanding financial markets. His interest in economics and finance draws his attention towards the new emerging Blockchain Technology and Cryptocurrency markets. He is continuously in a learning process and keeps himself motivated by sharing his acquired knowledge. In free time he reads thriller fictions novels and sometimes explore his culinary skills.

Is buying EOS like buying Bitcoin at a discount?