Bitcoin for bullets: inside the first crowdfunded war 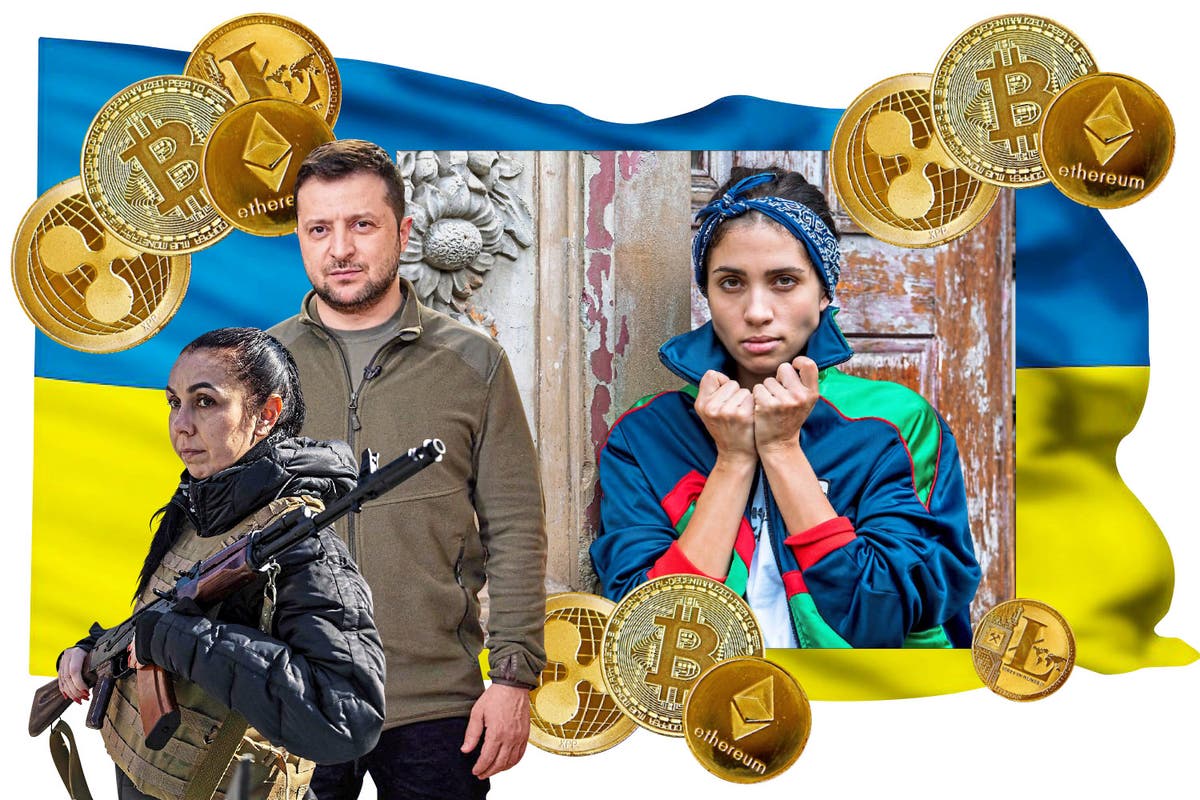 Within days of Russia’s vicious onslaught on Ukraine, citizens across the world began mobilizing support online, sharing lists of organisations, charities and initiatives worthy of help.

Of course crowdfunding in the wake of humanitarian disasters is nothing new — but alongside the calls for donations to charities, for the first time, we began to see new kinds of appeals: friends sharing links to fund the Ukrainian army directly, or boasting they had just set up a Patreon subscription to buy “tanks and missiles”. Over the course of these past few weeks, crowdfunding has become an ever bigger part of the Ukrainian war effort. Should you wish to help purchase vital new equipment or weaponry, the National Bank of Ukraine has set up a handy page where you can donate in the currency of your choice (it even accepts Google Pay).

It’s proven a successful way of getting much-needed funds flowing into the military coffers: as of March 22, the National Bank of Ukraine account had raised 12.2 billion hryvnia (£313 million), which has arrived in dollars, euros, pounds and more . “It’s definitely the largest scale crowdfunding effort of this kind that I’ve seen,” says Ed Arnold, a former British Army officer, now a defense analyst at the Royal United Services Institute.

In fact, the amount raised equates to a 6.7 per cent boost to the Ukrainian annual defense budget — which was just £4.5 billion (according to the SIPRI Military Expenditure Database) compared with Russia’s $47 billion. And as headlines stack up of Ukrainian forces (alongside local volunteers) mounting a valiant defence, despite some seemingly insurmountable odds, the donations continue to pour in.

Volodymyr Zelensky: Crowdfunding has proven a successful way of getting much-needed funds flowing into the military coffers.

“It’s almost unprecedented,” says Arnold. “But the priority is so strong in terms of what they need.” He estimates there are around 900,000 conscripts in the Ukrainian armed forces, supplemented by 25,000 foreign troops, and an unknown number mobilized from local populations and given government-issued weapons — hundreds of thousands, for sure. Either way, it costs a lot to keep them all safe, warm and fed. Understanding the position they were in, and their relative lack of resources versus the Russian army, the Ukrainian government has been savvy in expanding its crowdfunding efforts beyond traditional currencies.

Early on in the war, the country’s 31-year-old minister for digital transformation, Mykhailo Fedorov (also President Volodymyr Zelensky’s deputy prime minister) made a special appeal for cryptoassets via the @Ukraine Twitter account. Then at the beginning of March, Fedorov announced that Ukraine would be minting NFTs — one-of-a-kind digital assets which could be sold like property — to raise funds for the military. “This has been a chance for cryptocurrencies to shine,” says Richard Usher of the BCB Group, which specializes in cryptocurrency services. “The appeal with crypto is that it’s borderless and it cuts out the middleman. You can contribute directly. And people really want to feel like they’re helping Ukraine.”

Donate here: Please give what you can to the Evening Standard Ukraine appeal

It’s a sentiment which was echoed by Nadya Tolokonnikova, one of the founders of Russian activist group and feminist punk band Pussy Riot — and the co-founder of Ukraine DAO, one of the first organizations to harness the power of NFTs to raise funds for the army. Via Ukraine DAO she created an NFT of the Ukrainian flag, which raised $7.1 million. “The plus of crypto is it’s borderless, it’s permit-less,” she said at the time. “Nobody can stop it, even if it’s [in] the war zone. If you have access to the internet, you have access to funds.”

Nadya Tolokonnikova is one of the founders of Russian activist group and feminist punk band Pussy Riot — and the co-founder of Ukraine DAO, one of the first organizations to harness the power of NFTs to raise funds for the army.

Last week, the crypto analytics firm, Elliptic, calculated that the Ukrainian government had crowdfunded $63.8 million in this way since the start of the Russian invasion, including an individual donation of $5.8 million. There is also now an official site, Aid for Ukraine, where you can donate in Bitcoin, Dogecoin, Ethereum and a range of other blockchain currencies to buy helmets, bulletproof vests and night vision sights.

Fedorov has meanwhile called on crypto exchanges to freeze wallets connected to Russian accounts. “This is not just the war against a centralized regime, this is the birth of blockchain as a backbone of global security,” Mike Chobanian, president of the Blockchain Association of Ukraine, has said.

Of course Ukraine has been fighting a war with Russia since 2014, when Putin annexed Crimea and sent troops to the Donbas, and in that time the country has learned many hard lessons. As Arnold said, the crowdfunding effort is almost unprecedented. The charity Come Back Alive (formerly Save Life in Ukraine), was founded by Vitaliy Deynega in 2014 to provide bulletproof vests to those fighting in Donbass. It has raised over $20 million to supply 100 military units since then.

A volunteer takes position at a checkpoint in a district in Kyiv, on March 20, 2022

“The state of the Ukrainian forces in 2014 was pretty appalling,” says Arnold. “They began a period of modernization and reform in 2016 but that was still constrained by budgetary issues — so while they have made improvements, it just hasn’t been enough for the breadth of the Ukrainian professional military.” Crowdfunding initiatives helped to fill the funding gaps. “And now there’s national mobilization — they just need so much more kit than they thought they would.” Arnold says he has personally donated around £2,000 worth of equipment left over from his tours of Afghanistan.

Come Back Alive had been raising most of its money via Patreon — a crowdfunding platform more commonly associated with artists and activists. However, on February 25, Patreon removed Come Back Alive from the site, issuing a (widely criticised) statement: “Patreon does not allow any campaigns involved in violence or purchasing of military equipment, regardless of their cause.”

Come Back Alive now stresses that it is not using the money to buy weapon systems — but, rather, armour, technology and supplies. Indeed, the equipment is all itemized on an open source document that makes slightly anxious reading: 50x thermal imaging night sights (13 million hryvnia); 2,000x pieces of body armor printed with “Putin is a Dick” (4.8 million hryvnia); and so on.

A man with his bicycle walks between debris outside the destroyed Retroville shopping mall in a residential district, after a Russian attack on the Ukranian capital Kyiv on March 21, 2022.

Arnold points out that the supplies most needed are not necessarily weapons systems in any case but simple pieces of civilian equipment. Such as mobile phones: “They won’t have enough encrypted systems for all the volunteers, so they’ll just be having to be using WhatsApp and other messaging services.” And old school mountaineering equipment: sleeping bags, rucksacks, boots, iodine tablets for purifying water, and so on. “Honestly, one of the best things you could do is go to a camping shop and send a load of kit to the Polish border,” says Arnold.

In some ways, crowdfunding is as old as war itself. Polish immigrants in the UK donated money to Polish forces during the Polish-Soviet War of 1918-21. During the Second World War, communities across Britain and the Commonwealth collected money to build Spitfires. Jamaica supplied 12 aircraft to the RAF via the “Bombers for Britain Fund” which launched in the Daily Gleaner newspaper. The difference now is that digital technology has made everything run much faster. It helps that so many in the tech industry have such close ties with Ukraine. “We basically decided to work 100 per cent for Ukraine. It’s hard to do anything else,” says Patrik Arnesson, the Swedish CEO of Ikonia, which provides a platform for artists who wish to sell NFTs of digital artworks. “It feels for me like they’re attacking my own country. I’ve spent a long time crying.”

Arnesson spent three years in Kyiv — many of his friends and colleagues are still there (although some have relocated to Lviv in the west). “I saw a country that was rising from a really tough period of war and corruption, but which had a lot of young people driven to improve the country,” he says. “What was so interesting as well was that it was driven by the people, not just the government. There was so much determination to change. And the development in those years was so great.” One of Ikonia’s NFTs is called Stand With Ukraine, created by digital artist Felipe Posada: minted in 43 million editions, available for $10, with 100 per cent of profits going to the Ukrainian charities Come Back Alive, Everybody Can (Kozhen Mozhe), and the Ukraine Humanitarian Fund. “So many NFT projects in the past have been about making crypto-billionaires richer — I have no interest in that,” he says. “But in terms of charity, NFTs can be amazing. We have no admin. We don’t ship anything. You pay $10 and all of it goes to charity.”

He has been heartened at the response. “Before the invasion, we reached out to creative agencies and offered to help them to create NFT products. They were interested but none of them really had time. After the invasion, we went back to them and said: ‘We’re doing this for Ukraine and we won’t charge anything if you give the money to Ukraine’. Six agencies said they want to do something. It’s quite beautiful. When it was purely for money, they didn’t have time. Now that it’s for Ukraine, they found time.”