Bitcoin Is Miles Ahead Of Central Bank Digital Currencies 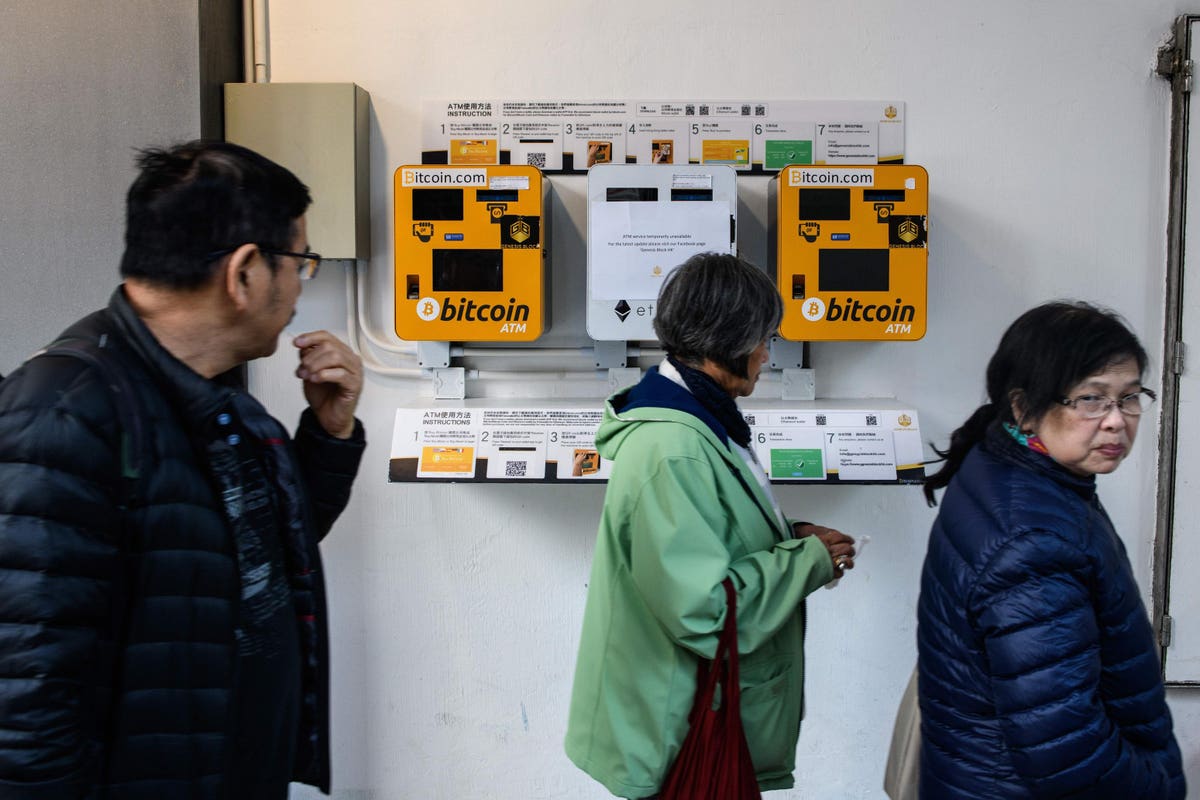 TOPSHOT – Pedestrians walk past ATM machines (L and R) for digital currency Bitcoin in Hong Kong on … [+] December 18, 2017. – Bitcoin has soared in recent weeks, breaking numerous records, and has risen more than 20-fold since the start of 2017. (Photo by Anthony WALLACE / AFP) (Photo by ANTHONY WALLACE/AFP via Getty Images)

Governments across the world are wrestling with how to implement digital currency standards. Many have come out against bitcoin as legal tender and are exploring their own digital currency pilots in order to “maintain monetary control”.

Yet for those looking at central bank digital currencies, the division between them and bitcoin not be more strong, in ways that may be counter-intuitive at first.

Analog states want to bring their “trust” into digital form in order to gain more control and surveillance over their citizens. This is exactly the future that bitcoin can hedge against— and there are several reasons why central bank digital currencies aren’t as trustworthy or as good of an idea as some policymakers may have you believe.

With most countries around the world embracing pilots of central bank digital currencies, it’s still a pretty unproven concept. China’s digital yuan (e-CNY) might be one of the furthest along, yet even still, it’s not fully ready for prime-time, with only limited city-by-city pilots and a pilot during the Winter Olympics. Countries have dedicated a lot of resources to research and potentially pilot the concept, but the reality is that no central bank digital currency has a decades-long track record of consistency and of protecting digital value for an array of retail customers as of 2022.

This matters because bitcoin has a track record dealing with an immense amount of demand, transaction volume, and attack vectors. While central banks have a lot of experience in the analog world issuing currencies that are hard to imitate or defraud, this doesn’t mean their experience will apply completely to the digital world, where attack vectors are very different.

We see governments struggling with securing their own digital data, requiring the help of domestic technology powerhouses: in the case of the United States, companies like Microsoft MSFT , and in the case of China, companies like Huawei. A Shanghai police database disclosure may have leaked the personal details of one billion Chinese residents. In 2020, the federal government of the United States suffered a huge data breach.

An entire ecosystem and reams of documentation have been built around bitcoin that a single government could scarcely replace or replicate — especially since localized fiefdoms are not how innovation has grown in the globalized Internet, where the Internet itself relied on a network of global collaborators and users to bring to full fruition.

2- Domestic top-down systems are not how software have flourished

When we look at the movement of protocols and the evolution of the Internet itself, it’s cross-country open-source collaboration that has helped quickly build innovative products.

Innovators and companies rallying around the world to think of new solutions to a protocol’s problem — and one where people can have open access to the data and systems required to power the system.

Centralized corporations or state-driven entities don’t play well across borders. For example, because of China’s fear of US-driven or Western-driven technology, Google, Facebook and others are not accessible to others without using a VPN.

A movement like the one surrounding bitcoin allows for people from across countries and companies to talk to one another and collaborate and build best-in-class tooling for all kinds of needs, from digital value storage to transfer.

It’s unlikely that a nation-state would have created, by itself, something like the Lightning Network and gotten it incorporated into the world financial infrastructure in a manner of years (rather than decades) and in a fashion that was democratic and consulted all stakeholders. Countries that are trying to hedge their risk to the current financial order (such as Russia with the Mir system) find that their transaction systems persist very rarely beyond their direct sphere of control.

Even Chinese payment rails such as Alipay, which have wide penetration overseas, are currently under the control of private companies — state-allied and state-dependent, to be sure, but not analogous to a top-down effort to build an entirely new payments infrastructure. This is a very good thing, because a totally concentrated, surveilled and controlled digital payments infrastructure is the foundation for a dystopian nightmare.

3- Despite what governments say, central bank digital currencies inevitably represent an intrusion of privacy and a potential front for surveillance

Governments are quick to call themselves out as “looking out for the privacy of their citizens” in policy papers and in pilots for central bank digital currencies. The ECB, in a blog post outlining its vision for the digital Euro, reinforces that “the protection of privacy must be of the highest standard.

People should be able to choose how much information they want to disclose – so long as they comply with prevailing laws”. Yet, it’s hard to trust that completely when you see how governments across the world have tapped their access to Internet traffic to surveil arbitrarily chosen enemies — and sometimes even their own citizens — and that throughout the rest of this blog post, the ECB describes crowding out private payment providers and others towards a centralized, widely-used digital currency that would become a magnet for data on the most intimate habits of millions if not billions of people.

Despite any protests to the contrary and a few salving yet ultimately meaningless words, the reality is that a central bank digital currency allows a government to entrench its powers in a way that won’t be very contested because the lack of technological ability has itself confined some governments.

Imagine the dystopian idea of ​​an organization that would know absolutely every financial transaction that people have made, as well as provided a level of individual control on this data — for example, penalizing certain accounts with detrimental interest rates. This is the reality of those looking to advance central bank digital currencies who think a major perk will be the ability for governments to provide individual accounts and interest rates. Framed in policy-speak, it is a way to penalize savers on a more individual basis — but surely also a way to penalize dissidents.

In China, for example, where centralized data is available in the form of a digital wallet, this has already led to consequences for protestors in Hong Kong. Many protestors queued to purchase transit passes in cash, since the digital trail left behind by Hong Kong’s Octopus card had previously been used as a source for Hong Kong police investigation. And a senior researcher with Peking University made the point that with China’s central bank digital currency, “no transaction that regulatory authorities would not be able to see.”

To add to that, perhaps control as well: censorship of transactions could happen based on information about the counteracting parties with one central entity being able to execute that. In fact, many pundits claim this as a central benefit of CBDCs: the ability to effectively tailor monetary (and perhaps even fiscal policy) with individualized interest rate targeting and perhaps stimulus that is targeted household-by-household.

Where economic pundits see benefits, those who have seen the other side of Hobbes’ Leviathan may beg to differ. Dissidents and those who would be penalized are left unheard. And lest we think this an issue related strictly to certain authoritarian governments, it is clear that with recent revelations and age-old grudges against virtual crimes that the “free world” (containing within it the country with the highest ever recorded imprisonment rate in human history) has its own way of casting its “criminals”, from Julian Assange to Thomas Drake.

Bitcoin has been panned as unreliable and as an energy sink — yet it is miles ahead of even the most advanced pilot for a central bank digital currency. The fact that so many don’t have access to even the most basic of financial instruments from loans to credit is a travesty: having a fully cash-based society is impractical as cash can be hard to move and flex.

However, the choice between central bank digital currencies and cash must also be painted as a false one. Peoples around the world are better off with an independent global standard that aims to protect their privacy and ability to transact without censorship, rather than falling for an inferior localized version that aims to surveil and control them.