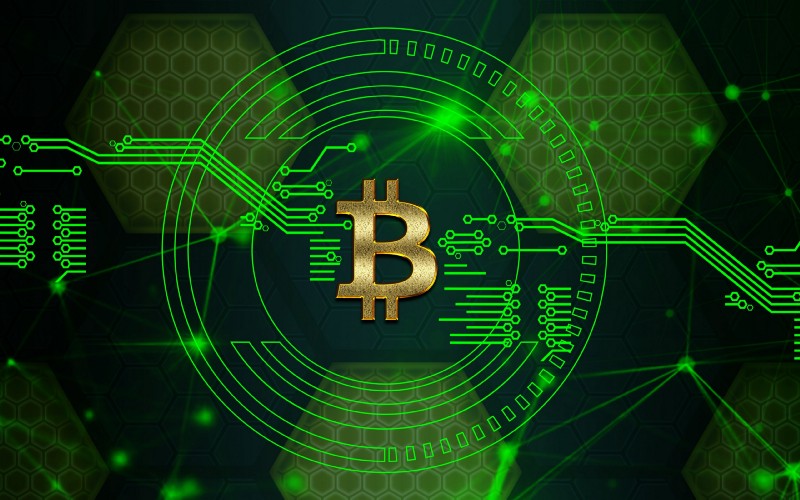 Bitcoin’s contributions to our lives far outweigh the money.

“The goal is not more money. The goal is living life on your terms.”
— Chris Brogan

Bitcoin is something that fascinates me. This fascination goes far beyond the simple financial aspect. Money is important in life, but it is not an end in itself for me. Rather, I would say that money is a consequence that always comes second when you bring value to others.

I read many books and articles about Bitcoin. Many times I see articles that focus only on the financial side of Bitcoin.

I think that’s a damaging thing because it makes some people think that Bitcoin is just another financial tool. But Bitcoin is much more than money to me, and to Bitcoiners.

Bitcoin Gives You Back Control

With no leader, and totally decentralized, Bitcoin represents an insoluble equation for the powerful of this world who wish to stop it in its progress.

Politicians and central bankers have been trying to stop Bitcoin for many months and years now. However, all their efforts have been in vain.

Why is this? Simply because you cannot stop something that belongs to everyone on Earth.

Fred Hampton was an American political activist, member of the Black Panther Party. He was a revolutionary who fought for the civil rights of blacks in the United States.

I particularly like this quote from him that applies perfectly to Bitcoin:

“You can kill a revolutionary but you can never kill the revolution.”
— Fred Hampton

Since the revolutionary Satoshi Nakamoto remained in the shadows, it was the Bitcoin revolution that took over one man.

And no one can stop the Bitcoin revolution.

The absence of a leader on the Bitcoin network ensures that no one can censor you when you want to make transactions with your Bitcoins.

With Bitcoin, you regain full control over what you own.

Bitcoin is a pseudonymous network which preserves your identity. As long as you don’t reveal the addresses you own to third parties, you are safe with what you own.

Bitcoin Protects What You Own

On August 15, 1971, President Richard Nixon completely changed the international monetary system by announcing the end of the convertibility of the US dollar into gold.

The system set up in 1944 following the Bretton Woods Agreement then broke down following a unilateral decision by the United States.

The Jamaica Accords signed in 1976 will validate this decision by putting a definitive end to the monetary system of fixed but adjustable parities. These agreements officially confirmed the abandonment of the international legal role of gold.

The new exchange rate system was officially legalized, and from now on the US dollar and other fiat currencies are no longer based on anything tangible.

The current monetary and financial system resulting from these Jamaica Accords allows the United States to impose the US dollar as the world reserve currency.

Taking advantage of the omnipotence of the US dollar, the United States does not hesitate to increase the money supply in circulation, which has the effect of constantly devaluing the value of the US dollar.

The other countries of the world have followed in the footsteps of the United States, making the banknote printing machine the solution to all the ills of the economy.

To fully understand the loss of buying power that you are experiencing, this second graph shows the evolution of a $100 buying power over time since 1980: 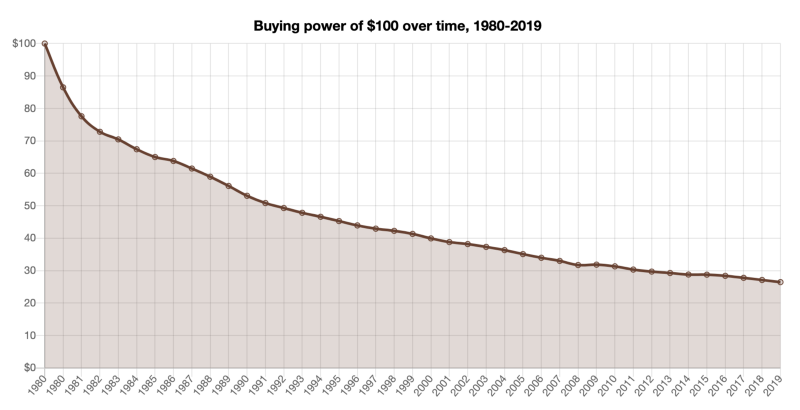 The current monetary and financial system therefore allows politicians, central bankers and economists to make decisions that constantly devalue what you own.

Conversely, Bitcoin offers you guarantees for the protection of your wealth. When you enter the Bitcoin world, you know the rules of the game: only 21 million Bitcoins will be in circulation by 2140, and the production of new Bitcoins will become scarcer over time.

The rules of Bitcoin’s monetary creation policy are immutable, which guarantees that 1 BTC today will always be equal to 1 BTC in the future.

As such, Bitcoin protects what you own better than the US dollar, or any other fiat currency, has ever, or ever will be able to do.

Bitcoin Promotes the Separation of Money and State

Many people see Bitcoin as a great asset with phenomenal performance potential. The fact that Bitcoin allowed to transform $1 invested at the beginning of 2010 into $90K at the end of 2019 is not unrelated to this.

The +9,000,000% performance posted by Bitcoin over the past decade has made some people lose sight of what is essential.

The main thing about Bitcoin is that it represents the first step in the separation of money and state.

If you still have any doubts about the problem with the current monetary and financial system, I’ll enlighten you with the figures. I’m not asking you to take my word for it, but just to look at the numbers.

Bitcoin urges us to take a critical look by verifying since its motto is: “Don’t trust, verify”.

This is what we are going to do by looking at the evolution of what you need to own to stay at the $100 purchasing power level since 1635: 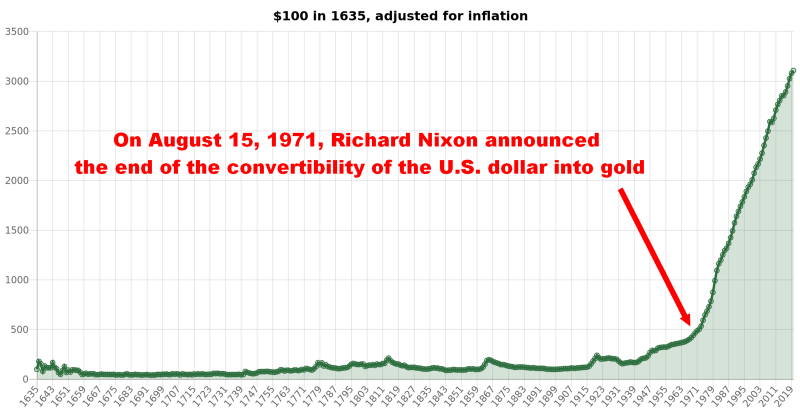 With the end of the convertibility of the US dollar into gold, the system was no longer based on anything tangible. The steady increase in the money supply only devalued what everyone had.

On the previous chart, you can clearly see the extent to which inflation has run amok from 1971 to the present day.

The current monetary and financial system clearly does not protect people. The few people at the head of it take advantage of the system to get rich while the inequalities between the very rich and the rest of the world have never been greater.

I am not even talking here about the problems of corruption inherent in this system, which gives full power to a few men and women.

Bitcoin proposes a total paradigm shift since its system is not controlled by men but by the laws of mathematics.

I don’t know about you, but I, for one, have much more confidence in the laws of mathematics than in humans.

Between Bitcoin and the current system, my choice is quickly made.

Bitcoin Is a Democracy in the Noble Sense of the Word

All over the world, we have been witnessing a real questioning of political power in recent years. Most major countries are affected by this crisis of representativeness.

Citizens around the world no longer recognize themselves in the people who simply lead them.

The rise of populism all over the world is no coincidence.

It reflects a rejection of the men and women at the head of a system that has long since ceased to protect populations. People feel that their voice no longer counts.

Bitcoin proposes a system that goes against the current system as well because it proposes to put power back into the hands of the people.

Bitcoin is a true democracy. No leader is there to lead Bitcoin one way or the other.

From my point of view, this is an incredible strength. When you enter the world of Bitcoin, you know that your voice will really be heard.

Bitcoin is a democracy in the noble sense of the word, and that is one more reason why more and more people believe in it for the future.

In the wake of China setting up a system to be able to track all the movements of its citizens, many countries around the world are increasingly aiming to establish a surveillance society.

In Sweden, cash has almost disappeared.

That seems at first sight to be a good thing. However, it also brings with it a major problem: all your financial transactions can now be traced.

You will be able to be judged by the purchases you make. Your journeys can be tracked even better by tracking your payments on public transport for example.

Your privacy is a right, and as with all rights, you will have to fight to keep them.

Bitcoin will not prevent surveillance cameras from being placed all over the streets of your country’s cities. Nor will facial recognition be stopped by Bitcoin.

However, Bitcoin will help preserve your privacy when it comes to money. The transactions you make will remain anonymous, as will what you own in Bitcoin.

Bitcoin is not a total solution to the surveillance society, but it is a bulwark that will help you preserve some of your privacy.

As such, Bitcoin should also be seen as a solution to freedom for millions of people living under the oppression of authoritarian regimes.

People in Venezuela, Cuba, Zimbabwe and Afghanistan already see Bitcoin as a Plan A in their daily lives. And this is of course no coincidence.

Many people make the mistake of looking at Bitcoin only through the financial prism. Bitcoin has made many people very rich, and it will continue to do so in the future.

But the purpose of Bitcoin is not simply money.

The purpose of Bitcoin is to build a world in which you can live on your own terms.

In the future, Bitcoin should allow you to make the transactions of your choice with your Bitcoins. No one should be able to censor you.

In addition, no one should be able to come and take away what you own for arbitrary reasons.

Bitcoin gives you back full control over your wealth which preserves it by ensuring that what you own in Bitcoin will never be devalued.

On the other hand, Bitcoin encourages you to think critically because it is not afraid of judgment since it is based solely on the laws of mathematics. Its evolutions are decided in a totally democratic way, and this gives you an essential role to play in the revolution it builds day by day.

By supporting Bitcoin in its revolution, you are also making a decision to help building a future in which you are free to act as you wish.

And that’s something essential to never forget with Bitcoin that is about more than money.