Bitcoin Is Ray Of Hope In Britain – Bitcoin Magazine 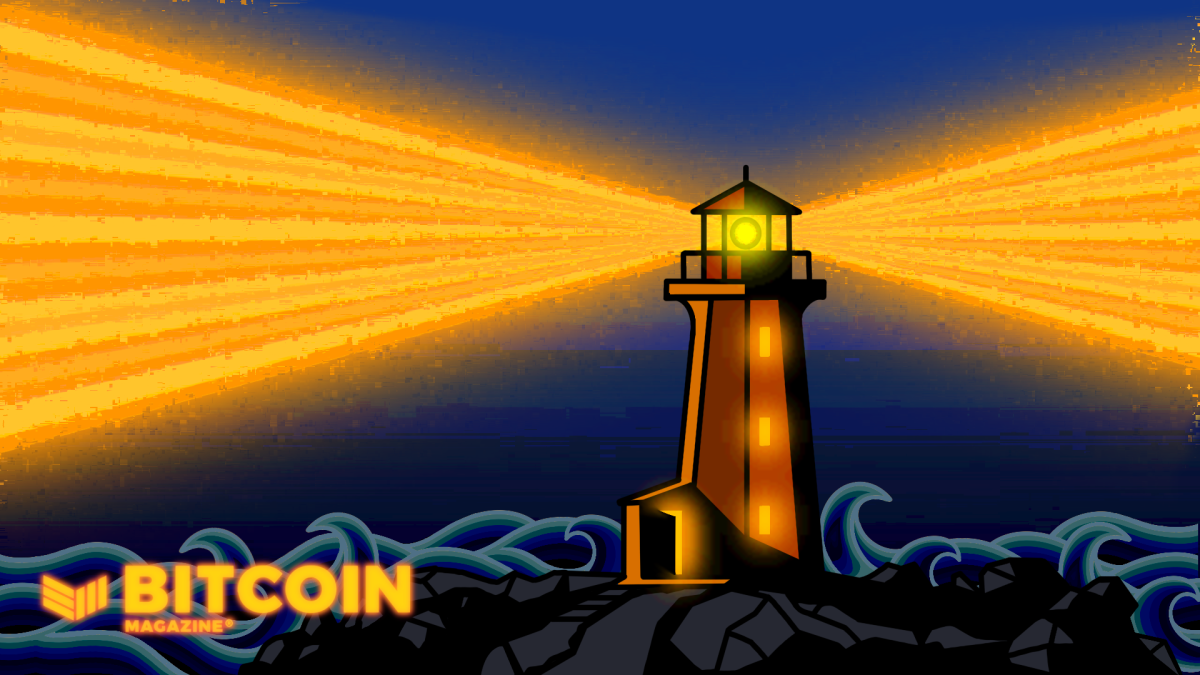 This is an opinion editorial by Bitcoms, a writer and British Bitcoiner.

“I made the joke on stage that as far as Bitcoin goes, I don’t think of myself as being from Edinburgh — I think myself as being from Twitter,” says writer Allen Farrington. “I have worried, looking forward, that Britain might be one of the last places to really take it seriously.”

But sitting down with me between sessions at the inaugural Bitcoin Collective conference in his home city, Farrington is feeling more positive. “I think this event is really impressive,” he says. “Seeing all the effort that’s gone into this, and seeing all the British Bitcoiners who’ve been equally excited by it and have come, it’s really encouraging.”

Ray of hope in no man’s land: a shaft of sunshine between Princes Street and Edinburgh Castle (Photo by Bitcoms)

He has a point: with dozens of top-drawer international speakers, an impressive range of homegrown exhibitors and a genuine buzz generated by hundreds of attendees, it’s hard not to feel energized by this new but already assured UK conference.

Britain Is Bitcoin No Man’s Land

But Farrington isn’t getting too carried away. “Regulatory wise, it’s pretty grim,” he says. “I know quite a lot of people who have elected not to start Bitcoin companies here. It’s not even that the regulations are bad. The problem in the UK is more just uncertainty. Nobody seems to know what you’re actually allowed to do here and how it relates to existing financial regulation.”

These remarks are later echoed on stage by Alan Higgins, Chief Investment Officer at the UK’s Coutts & Co., one of the world’s oldest banks which manages the wealth of high net-worth investors. “It’s just not clear what we can and cannot do … it is unclear on regulatory,” he explains. “And if we get it wrong: huge fines,” he adds, concisely explaining why even the UK’s more adventurous financial institutions still hesitate to get involved in Bitcoin. 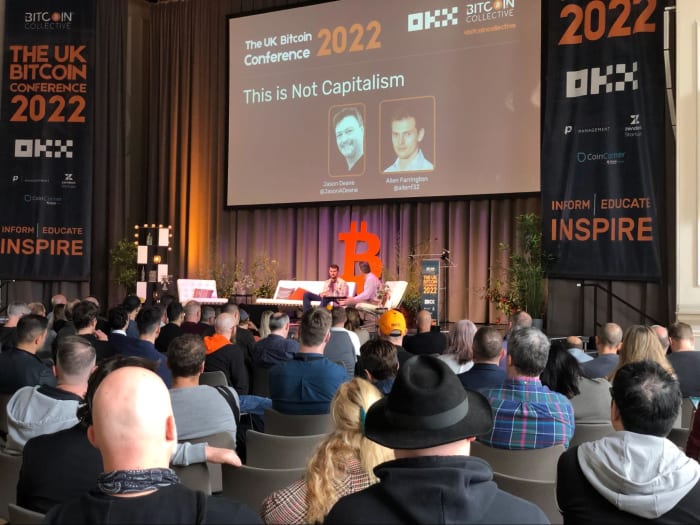 Btrust board member and Fedi CEO Obi Nwosu gives me some insight as to why the UK’s regulatory pace is so glacial and the environment so unfriendly. From 2013 to 2021, when he ran British bitcoin-only exchange Coinfloor, Nwosu saw “more and more mood music around appropriate and sensitive regulation coming in. However, the people pushing for that — I would call them the Bitcoin progressives from the regulatory world and the political sphere — tended to ultimately see that this was so powerful that they needed to be part of it. So they would leave and one by one they would join Bitcoin companies, or crypto companies. The end result is … you’re left with people who either don’t get it, or get it but have come to the conclusion that it’s a net negative. And that leads to a more hostile regulatory environment.”

Another problem is that the little relevant UK regulation already in existence doesn’t address the most important issues. “My big pet peeve with the regulation generally is that it’s all about anti money laundering but not really protecting the consumer,” explains Danny Scott, CEO of British exchange Coincorner, pointing to large exchanges being allowed to “add in every cryptocurrency and token you can think of and list them all — it’s a casino.” Scott tells me he would like to see regulation “protecting the consumer from ‘pump-and-dumps,’ the LUNAs, or the ones that are not legitimate companies. You need protection from them, not from a company buying and selling Bitcoin.”

So what is the likely direction of regulatory travel? dr Lisa Cameron, a UK Member of Parliament who attended both days of the conference, leads the All Party Parliamentary Group (APPG) on Digital Assets and Cryptocurrency. “We’ve already taken the written submissions to the group, and over the next two months we are going to be having a series of oral evidence sessions,” she tells me. “Then we’ll pull it together for some initial recommendations to government at January time, and we want to be publishing it in the new year.”

“It’s not Bitcoin specific,” she explains, but “an inquiry into the UK government’s aim to make Britain the hub of cryptocurrency … We’re going to look at CBDCs, stablecoins, and also look at best practice internationally, because … post Brexit , the UK can create a bespoke regulatory framework and develop its own particular niche.”

While the scope of the APPG may sound overly broad and somewhat preliminary, at least the Edinburgh conference gave Dr. Cameron the opportunity to discuss the issues on and off stage with Bitcoin veterans such as Samson Mow, whose new Jan3 venture aims to educate politicians and administrators. He draws the same kind of distinctions which Danny Scott wants to see the authorities appreciate. “I don’t believe Bitcoin requires any regulation. It’s just money,” Mow tells me. “I think this is going to be the trend where Bitcoin is recognized as money, it’s not regulated, but all the cryptocurrencies will be regulated. You can also add another layer of regulation for stablecoins. So I think having this distinction between these three groups of things is critical in the view for any regulator trying to establish any regulation that makes sense.”

Whether the UK’s APPG will mirror the constructive efforts of some US politicians, follow the EU’s blatantly hostile approach, or take a different track altogether remains to be seen. But what seems certain is that — currently at least — Britain is Bitcoin no-man’s land, not just from a regulatory standpoint but also a political and even a cultural standpoint.

“I see the UK being caught in between the United States and Europe. I think the European Union will move down the CBDC route, and the Americas will simply move towards Bitcoin,” Jan3’s Doogie Ewing tells me. “In the UK, we are right in between and I think we could go either way.”

Allen Farrington has long viewed the UK similarly: neither leaning towards nor away from Bitcoin. “I guess it could be worse, right? It could be the EU,” he says, alluding to the bloc’s overtly hostile Bitcoin stance. “It’s taken very seriously in the US, I think in part because it’s a natural extension of Silicon Valley, and there’s probably nowhere in the world where freedom itself is as culturally ingrained … it’s a natural way to find Bitcoin,” he says . “On the complete other end of the spectrum, there’s Central America, West Africa, Southeast Asia, where it’s actually the material circumstances that push people towards Bitcoin. I was worried for a while that the UK just doesn’t really have any of this. It doesn’t have any of these reasons why it might take off.”

British Bitcoiners Are The Ray Of Hope

But Farrington is starting to see prospects for the UK more positively. “What it’s going to come down to is exactly this kind of grassroots effort,” he says, alluding to the conference. “That’s why I was so disappointed a year ago but why I’m so encouraged now.”

Danny Scott is similarly enthused by what he’s been seeing on the ground across the UK over the past six months or so. “We’ve seen quite an uptick of small communities,” he says, pointing to around “30 UK meetups now that are starting to take shape … they’re talking about Bitcoin and trying to help grow Bitcoin adoption in their areas. Bitcoin is a community project and a community thing, so it’s nice we’re starting to see that now in the UK”

Obi Nwosu has noted similarly positive trends. “We’ve seen this organic increase — that started to take off in 2017/2018 — continue to grow, and the grassroots support for Bitcoin amongst the UK Bitcoin community is getting stronger and stronger and stronger,” he says. “And that’s really interesting because any change that happens like that tends to be very tough, very strong, very hard to break. So I think the path to Bitcoin’s success is to keep doubling down on that. Talk to regulators, try to explain, try to support their decision making process, but not to build a strategy that relies on them.”

Doogie Ewing also sees the UK Bitcoin community as pivotal for moving the country in the right direction. “I think it’s incumbent on us as Bitcoiners to help raise awareness about the use case for Bitcoin, how it helps empower individual sovereignty,” he says. “And once we can educate people, I think the weight will come from the people to push the Bitcoin standard in the UK and align more towards the Americas, and maybe away from the CBDC which I think is coming for Europe.” 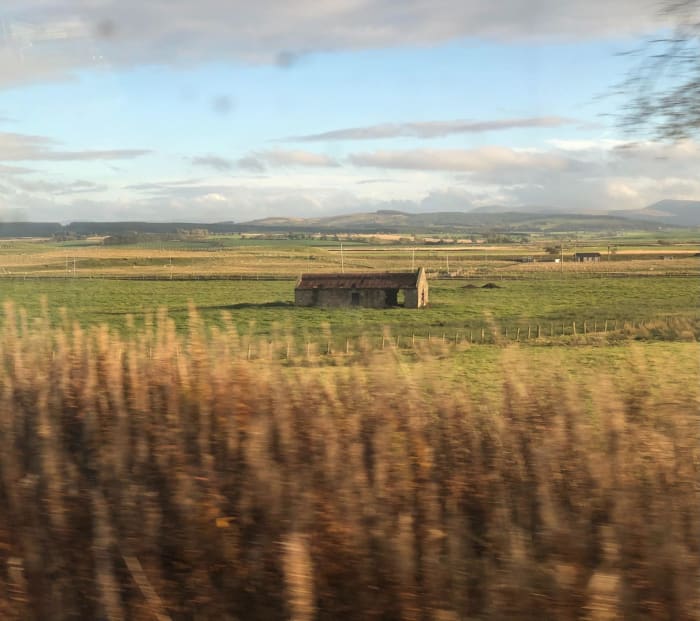 A ray of hope in no man’s land: sunshine hits a shelter in the countryside near Edinburgh (Photo by Bitcoms)

Bitcoin Collective CEO Jordan Walker voices similar sentiments. “The conference was a great success, but much like Bitcoin this is about the decentralized but collective effort of everyone in the space doing their bit around the country to educate, inform and inspire others on Bitcoin. It gives people hope in a time of financial despair.”

The consensus is clear: if the hope of a Bitcoin-friendly Britain is to be realized, a concerted effort from the country’s Bitcoiners is going to be crucial.

The inaugural Bitcoin Collective conference ran in Edinburgh from 21-22 October 2022. All the sessions can be watched online. The 2023 conference will be in London.

This is a guest post by Bitcoms. Opinions expressed are entirely their own and do not necessarily reflect those of BTC Inc or Bitcoin Magazine.

Is Ethereum A Good Investment And Should I Invest In ETH?