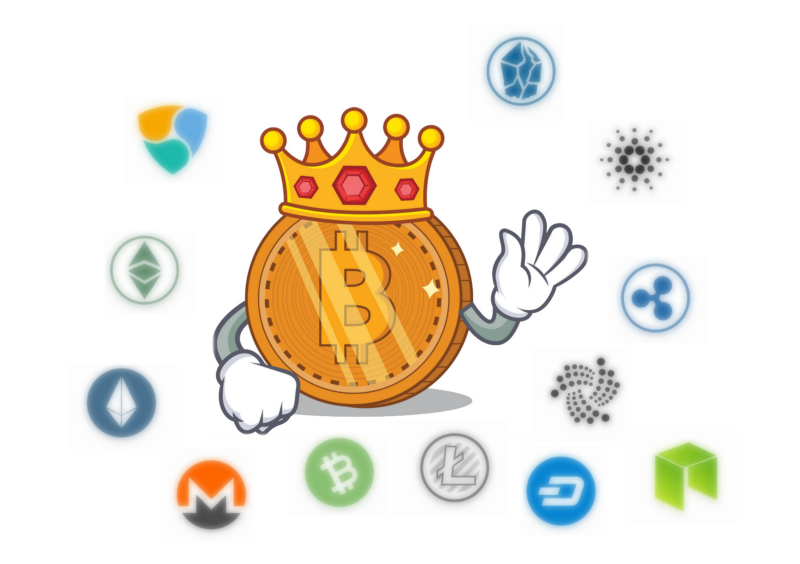 Its competitors are light years away from Bitcoin.

Bitcoin is still the king in the cryptocurrency industry. In fact, I’d say Bitcoin is a hegemonic leader. Whatever your opinion on Bitcoin, you will at least agree that Bitcoin’s dominance of this industry cannot be challenged.

Behind the advent of Bitcoin, a true cryptocurrency industry was born. Within this industry, every cryptocurrency project dreams of only one thing: to take the place of the king and to become the new king.

Ethereum, Ripple, Bitcoin Cash or Litecoin are cryptocurrencies fighting every day to one day surpass Bitcoin. It is a logical and honorable ambition. Indeed, one always seeks to surpass the best in one’s field.

Unfortunately for these cryptocurrencies, Bitcoin will remain the king in the cryptocurrency industry for a very long time to come. I see three main reasons for this.

1. Bitcoin Has Been Able To Leverage Its First-Mover Advantage

Officially launched on January 3, 2009, by Satoshi Nakamoto, Bitcoin is the first successful implementation of a cryptocurrency based on the Blockchain concept.

Bitcoin is a true revolution that has given birth to a whole industry in its own right: that of cryptocurrencies.

By being the first in this segment that it has created itself, Bitcoin necessarily has a significant advantage over its competitors. Over the past 11 years, this advantage has never diminished.

On the contrary, Bitcoin has continued to widen the gap over its competitors and more and more users are coming on board.

The success of Bitcoin for more than 11 years reinforces users’ confidence in the security of Bitcoin and its future.

Due to its ever-increasing number of users compared to the number of users of other cryptocurrencies, Bitcoin also benefits from the so-called network effect. This effect is also known as Metcalfe’s Law.

This theoretical and empirical law was enunciated by Robert Metcalfe. It stipulates that the utility of a network is proportional to the square of the number of its users.

This law would apply under the assumption of homogeneity of the nodes of the network, which may consist of agents or objects.

In concrete terms, the more Bitcoin users there are, the more useful the Bitcoin network becomes squared.

As this network utility increases, new users will have a greater interest in using Bitcoin when they enter the world of cryptocurrencies.

It is a virtuous circle that benefits Bitcoin to the full.

When the general public thinks of Blockchain or cryptocurrencies, they immediately think of Bitcoin.

When a person wants to get into cryptocurrency world, he will necessarily exchange his fiat currency into Bitcoin.

As a result, Bitcoin is constantly seeing much more new money coming in than its competitors, which only reinforces its dominance in the market, which has risen to over 65% in 2019.

With Bitcoin’s third Halving scheduled for May 2020, it is highly likely that Bitcoin’s market dominance will even return to well above 70%.

Bitcoin has been able to leverage its first-mover advantage over the past decade. Now, the lead that this has given Bitcoin seems almost unattainable for its competitors.

2. Bitcoin Is Truly Decentralized With No Leader

Among the most capitalized cryptocurrencies on the market, Bitcoin is the only one that is truly decentralized with no leader. Bitcoin has a permissionless and trustless blockchain.

Bitcoin belongs to everyone and anyone can decide to become a node on its network.

This unique feature of Bitcoin makes it much more resistant to censorship than its competitors.

Governments in different countries cannot take anyone to court to try to block the rise of Bitcoin.

Bitcoin gives power back to its users and by extension to the people.

No one can stop you from making transactions on the Bitcoin Blockchain.

Your Bitcoins are entirely yours and you can use them as you want.

This lack of leadership forces the community to find consensus to move forward and make Bitcoin evolve.

Some people find that this slows down the evolution of Bitcoin, but I sincerely believe that this is the price to pay for a truly democratic system.

This protects Bitcoin from arbitrary decisions that would go against the interests of its users.

As such, Bitcoin makes a huge difference with the current monetary and financial system but also with its competitors in the cryptocurrency world.

3. Innovation Around Bitcoin Is Permanent

Bitcoin’s competitors in the cryptocurrency world criticize Bitcoin’s aging technology for being obsolete. Bitcoin is based on Proof-of-Work which leads to high consumption of electricity according to them.

The electricity consumption required to produce new Bitcoins is what makes Bitcoin so valuable.

Some also argue that Bitcoin does not support enough transactions per second.

These people need to understand that Bitcoin is the only cryptocurrency to really face such scalability issues due to the very large number of users on its Blockchain.

Cryptocurrencies that claim to be able to handle from 100K to 1 million transactions per second only promise but are not based on anything concrete.

They have never, and will never be able to test their supposedly superior technologies under real-world conditions.

Others believe that Bitcoin should include functionality to support smart contracts like Ethereum.

The truth is that Bitcoin Core software should be kept as lightweight as possible.

The strong community around Bitcoin and the growing number of companies building services based on the Bitcoin Blockchain enables continuous Bitcoin innovation.

A company will necessarily offer smart contracts as an additional layer on top of Bitcoin if the need becomes real in the future.

If cryptocurrencies offer features that Bitcoin does not support but are particularly useful, companies will offer this around Bitcoin as well.

The very large number of people involved in Bitcoin will allow it to stay ahead of other cryptocurrencies via its ecosystem and not mandatory through Bitcoin Core.

A good example to consider is the Lightning Network, whose generalization over the Bitcoin Blockchain should exponentially increase its scalability.

The Lightning Network will be proposed as an additional layer to Bitcoin.

When you think about Bitcoin, you need to think about its entire ecosystem, not just its Blockchain.

Bitcoin alone is already the king in the cryptocurrency industry. Add to that the complete ecosystem that has developed around it over the past 11 years and Bitcoin has an even stronger advantage over its competitors.

Bitcoin has been responsible for the creation of an industry in its own right: that of cryptocurrencies. As a first-mover in this brand new industry, Bitcoin benefited from the first-mover advantage.

This first-mover advantage allowed Bitcoin to grow with a considerable lead over its competitors. In the 11 years of its existence, the Bitcoin community has capitalized on this advantage and has continued to build on it.

As we enter a new decade, Bitcoin’s advantage over its competitors has never seemed more important. Bitcoin is still the king and will remain so for many years to come in my opinion.

Mark Cuban is ‘very bullish’ on the upcoming Ethereum ‘merge.’ Here’s why he says the upgrade is so important for the cryptocurrency