Bitcoin Miners Stop Selling – Is This The Bottom Signal? 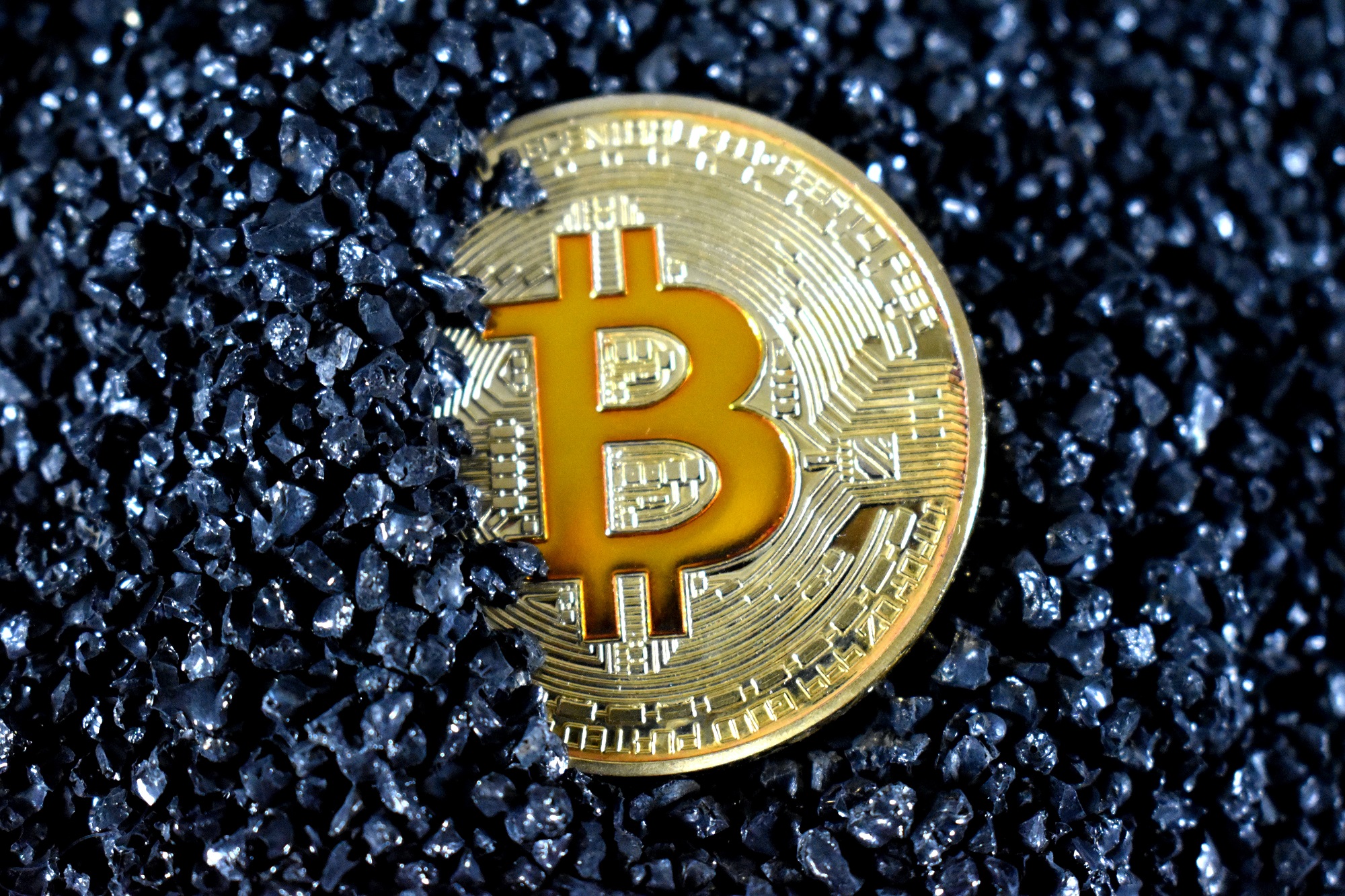 Given the escalating drama surrounding the Digital Currency Group (DCG), it does not seem out of the question that the Bitcoin price will drop once again. Despite today’s breakout above the important $17,000 level, a bankruptcy of DCG and a related dissolution of the Grayscale Bitcoin Trust (GBTC) could have a major impact on the price, although it may be partially priced in.

However, a reliable indicator from previous bear markets, the overall BTC miner activity shows that the bottom could be near if it’s not already in. The miner capitulation that began in mid-December may be over for now.

According to Glassnode data, the heavy selling pressure from miners that has weighed on the market over the past 4 months has subsided for now. The Bitcoin miner net position change is back in the green, which means that miners are accumulating again instead of selling, as analyst Will Clemente pointed out.

Another metric that signals a bottom has already been reached is the Puell Multiple. The indicator looks at the supply side of the Bitcoin economy, and the miners, and examines market cycles from a mining revenue perspective. It is calculated by dividing the daily issuance value of Bitcoins (in USD) by the 365-day moving average of the daily issuance value.

In every cycle, a downward trend in my revenue forms. This trend is always broken shortly after the bottom of the BTC cycle. A look at the current chart shows that the breakout happened recently, suggesting that Bitcoin may have bottomed at $15,500, according to an analysis by CryptoCon. 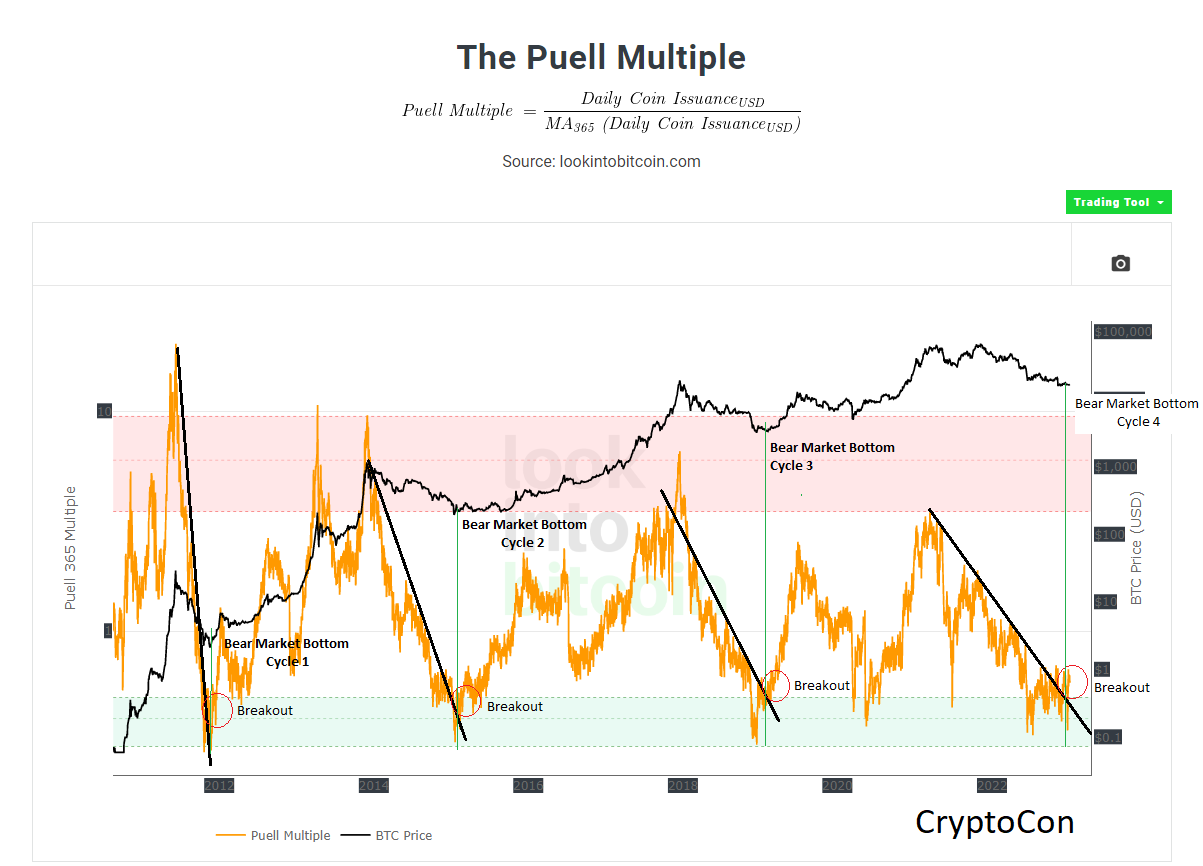 Bitcoin: Two Or Eight Months Of Bear Market Ahead?

Jiang Zhuoer, CEO of mining pool BTC.top today discussed his take on the current Bitcoin market cycle. According to Zhuoer, BTC may have bottomed in 2022 when the FTX collapse caused the price to drop to $15,476. If so, all three bear markets would have taken a similar amount of time from the previous ATH to the bottom.

“The 4-year halving leading to the 4-year cycle law still appears to be unbreakable,” the CEO claims. The analysis is also reinforced by the chart below, according to which Bitcoin has always been close to the bottom after 66% progress in the 4-year cycle.

Based on market sentiment observations, Zhuoer says the market is in the final sideways phase of the bear market. “Events such as DCG bankruptcy have already been priced in and would no longer have a significant impact on the price.”

Zhuoer’s optimistic prediction is that if the current bear market and the 2018 bear market are similar, the price could go sideways for another two months before the next bull market begins. The BTC.top CEO’s pessimistic scenario is that BTC faces another eight months of sideways movement at the bottom, if the current market cycle is similar to the 2014 bear market.

I expect Ethereum (ETH) to start rising earlier than Bitcoin (BTC) as the leader of the next bull market. This should occur between March and May 2023, the ETH price would be permanently out of the current bottom range.

At press time, the BTC price was at $17,219, breaking above a three-week resistance level. 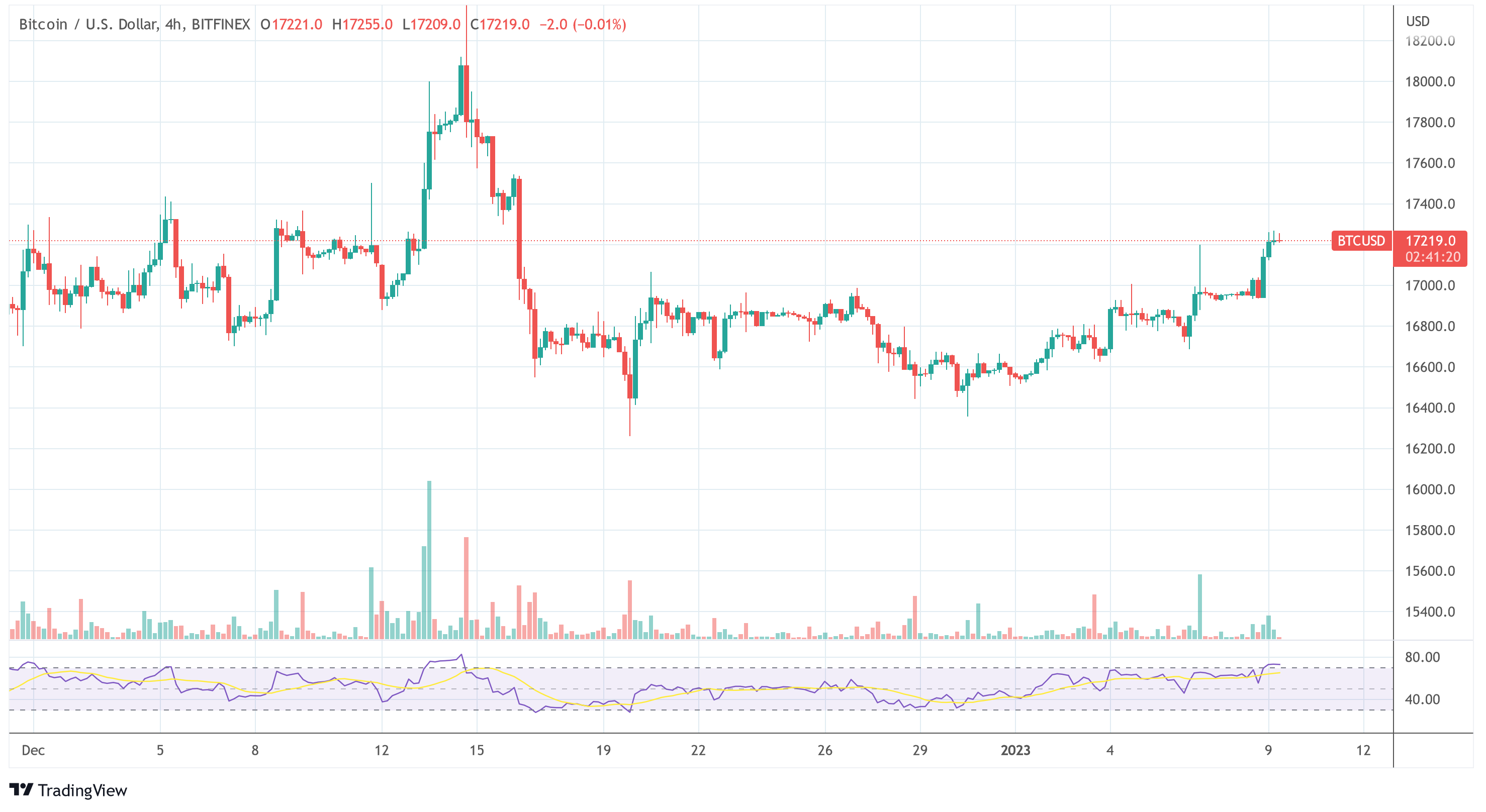 Featured image from Kanchanara / Unsplash, Charts from Twitter and TradingView.com