BTC Chops Either Side of $30K, ADA Outperformance Continues 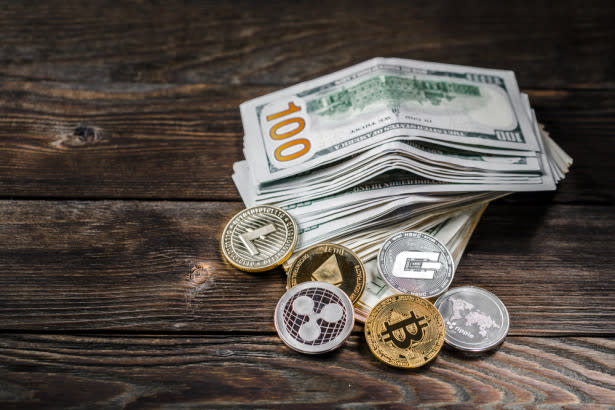 State Of The Market

Amid a lack of notable macro catalysts, cryptocurrency markets continue to chop within intra-day ranges. Total crypto market capitalization was last around $1.225 trillion on Wednesday, almost bang on its 21-Day Moving Average, having swung within a $1.17-1.28 trillion range this week.

The relatively non-committal tone to cryptocurrency trade so far this week reflects broadly flat price action in US equity markets (with which crypto has had a close positive correlation in recent months). Price action in US government bond markets and in the US dollar has this week also left a lot to be desired, with traders for the most part keeping their powder dry ahead of Friday’s all-important US Consumer Price Inflation (CPI) data.

If the data offers fresh evidence that price pressures in the US are starting to ease, this will ease uncertainty about how much more the US Federal Reserve is going to tighten monetary policy in the latter stages of 2022 and in 2023. The prospect of the Fed needing to lift interest rates well into so-called restrictive territory to curb persistently high inflation is a key risk for crypto that has generally benefitted from looser financial conditions in recent years.

In fitting with the broader theme of consolidation this week, bitcoin was last trading just below $30,500, down just over 2.0% on the day but well within this week’s and recent low-$29,000s to upper-$31,000 ranges. The world’s largest cryptocurrency, which at current levels has a market cap of around $580 billion, continues to find solid buying interest every time it probes its 21-Day Moving Average (currently just below $30,000). Indeed, technicians might well view bitcoin’s success in holding above its 21DMA so consistently in recent sessions as a potentially bullish short-term signal.

Ethereum price action is much the same. ETH/USD was last trading just above $1800, well within this week’s low-$1,700s to low-$1,900s range. However, by contrast to bitcoin, ethereum has consistently failed to break/hold above its 21DMA in recent sessions and appears to be threatening a break below a key area of ​​support in the $1700s. At current levels, the world’s second-largest cryptocurrency has a market cap of around $220 billion.

Turning to the major altcoins; Binance’s BNB was broadly flat in the $290 area on Tuesday after posting multi-week lows in the low $270s on Tuesday. Ripple’s XRP was last around 2.5% lower on Tuesday as it continues to pivot its 21DMA in the $0.40 area. Solana’s SOL was last flat on the day in the $40 per token area, while Cardano’s ADA continues to look comparatively bullish and was last up around 4.0% on Wednesday, taking its gains since its late May lows to nearly 50%.

Cardano’s outperformance versus the likes of some of its major layer-1, smart-contract enabled blockchain competitors like Ethereum, Solana and Avalanche has been notable in the last few weeks. Indeed, while Ethereum, Solana and Avalanche are all nursing losses of around 7%, 12% and 4% in the last seven sessions, according to CoinMarketCap data, Cardano is up by over 4.0%.

Crypto analysts have cited a few factors as driving recent outperformance, including; 1) Cardano’s upcoming Vasil hardfork on 29 June that will improve its Plutus smart contract platform and 2) continued growth of development activity on its blockchain. The number of projects being built on Cardano just surpassed 1000, Cardano blockchain developers Input Output HongKong (IOHK) announced on Wednesday. Meanwhile, after claiming the crown as the most developed crypto blockchain on Github in 2021, Cardano has continued to outperform its major competitors in terms of the number of new Github commits per month.

Elsewhere, Litcoin is lagging most of its major peers and was last trading roughly flat over the last 24 hours, CoinMarketCap data showed on Wednesday. That could reflect an announcement on Wednesday from major South Korean crypto exchange Upbit that it would be delisting Litcoin over its MimbleWimble privacy upgrade. South Korean exchanges are required to enforce strict Know Your Customer (KYC) and Anti-Money Laundering (AML) guidelines and Litecoin is not the first so-called “privacy coin” to be delisted.

Elsewhere, though it is no longer classed as a major altcoin, Terra’s LUNA 2.0 token has continued to collapse in recent days, and was last down nearly 20% on Wednesday around $3.50. Just seven days ago it was trading closer to $7.30 per token. Crypto analysts are citing a high level of Fear, Uncertainty and Doubt (FUD) surrounding the Terra ecosystem in wake of allegations on social media that Terra founder and Terraform Labs (TFL) CEO Do Kwon outright lied about LUNA 2.0 being fully community-owned and with TFL accused of owing 42M LUNA 2.0 tokens. Kwon’s decision to take his Twitter account private hasn’t helped things.

Immediately officially after unveiling the first major US bill to regulate cryptocurrencies and digital assets, Senator Cynthia Lummis was speaking CNBC and referred to bitcoin as the “hardest money ever created”. Bitcoin can serve as a portfolio diversifier for investors, Lummis added. The bipartisan crypto bill put forth by Lummis and fellow Senator Kirsten Gillibrand on Tuesday received a mostly positive reception from the crypto community.

Furthermore, a group of human rights activists from 20 countries penned an open letter to the US Congress on Monday in support of “responsible crypto innovation” and arguing that bitcoin and stablecoins are an essential global tool for the promotion of democracy and freedom around the world . The letter comes after a group of anti-crypto members of the scientific community sent an open letter to Congress criticizing crypto and its associated risks.

“We write to urge an open-minded, empathetic approach toward monetary tools that are increasingly playing a role in the lives of people facing political repression and economic hardship,” the group of human rights activists said. “Bitcoin and stablecoins offer ungated access to the global economy for people in countries like Nigeria, Turkey, or Argentina, where local currencies are collapsing, broken, or cut off from the outside world”.

Elsewhere, Grayscale has reportedly hired Don Verrilli, a former US solicitor general under the Obama administration, to help push the US Security and Exchange Committee (SEC) into approving its bitcoin Exchange Traded Fund (ETF) application. The SEC will make a decision on whether Grayscale is able to convert its Bitcoin Trust to a proper bitcoin ETF by 6 July.

Meanwhile, after the New York Senate passed a bill that would put a two-year moratorium on all new fossil-fuel-powered crypto mining projects, the state’s governor is yet to commit to signing the bill into law or not. “We’ll be looking at all the bills very, very closely. We have a lot of work to do over the next six months,” Governor Kathy Hochul said on Tuesday.

In crypto regulatory news outside of the US, outgoing French lawmaker Pierre Person said in a report published on Wednesday that France should recognize Decentralized Autonomous Organizations (DAOs) and NFTs in its legal system, but also called for a ban on fossil fuel-powered crypto mining. Person accused the EU of dithering and being indecisive in its approach to crypto and called for the bloc to seize the opportunities offered by crypto.

The UK’s Finance Ministry said on Tuesday that it will soon begin testing the use of the distributed ledger technology (DLT) that underpins crypto for traditional financial services and market activities. Specifically, the UK will begin the testing of DLT in the trading and settlement of stocks and bonds as soon as 2023, in part of what the Finance Ministry says is its drive to become a global “crypto hub”.

Elsewhere, PayPal announced on Wednesday that it now supports the transfer of bitcoin and other cryptocurrencies from its in-app wallet to external wallets. Meanwhile, major global payments company Chechout.com will now allow companies to accept and make payments in USDC. Speaking of USDC, Circle announced that the Polygon blockchain would now be supported on its payments platform.

In terms of exchange news; major US market-maker Citadel and Virtu announced on Wednesday that they plan to build a crypto exchange, with input also coming from US pension plan provers and asset management giants Fidelity and Charles Schwab. Meanwhile, Indonesia’s largest crypto exchange Pintu has raised $113 million in its latest funding round, while Binance is reportedly in talks with officials in the Philippines to obtain a license there.

In news related to Decentralized Finance (DeFi), the Osmosis Decentralized Exchange has been halted for emergency maintenance amid a possible $5 million liquidity pool hack. Meanwhile, Solana has set up a $100 million fund in South Korea to support Web3 development, which will see funds flow to into the development of NFT platforms, blockchain gaming and new DeFi protocols.

This article was originally posted on FX Empire

The Biggest Tezos Hackathon To Date, Now Has Over 5,000 Registered Developers