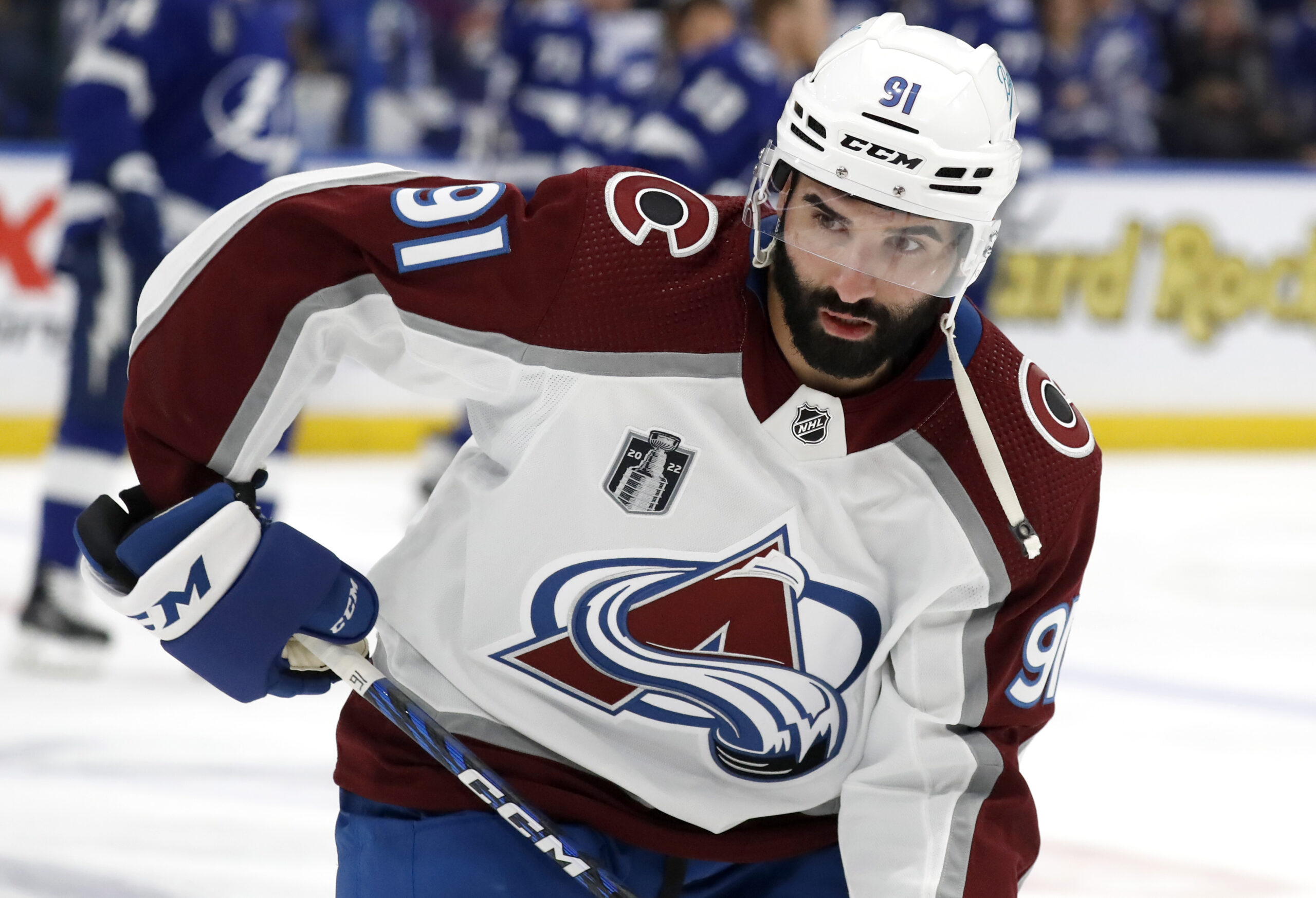 As of this writing, we’re nearly two weeks into the NHL’s free agent period and Nazem Kadri has yet to sign a contract for the 2022-23 season. With the list of potential suitors gradually shrinking as teams look for offensive reinforcements elsewhere, the likelihood that the 31-year-old center returns to the Colorado Avalanche grows by the day. Of course, the team would need to clear cap room through trade to fit his new deal, but I’m not here to debate the merits of such a deal. Instead, I argue that re-upping with the reigning Stanley Cup champions is the most prudent choice if he weighs personal and team success over the monetary aspect. Let’s dive in.

Few teams in the NHL can match the pace and intensity at which the Avalanche play on a nightly basis, and it’s a strategy that they’ve committed to and maintained over the past several seasons. Not only are their skilled passers and fluid skaters able to manufacture chances at a high rate, but the team’s cache of shooters reliably finishes those chances at an unparalleled clip, with the team scoring the most goals per 60 minutes at 5v5 over a three -year span. The Avalanche power play isn’t too shabby (fifth in conversion since 2020-21), but truly great teams are able to consistently dominate play without relying on a numerical advantage.

Through a game plan centered around generating a ton of opportunities off the rush, coach Jared Bednar’s charges rank at or near the top in every meaningful offensive category at the team level. They emphasize a rapid transition game starting with a controlled zone exit (with possession) from one of their swift-skating blueliners and let their versatile forward group create offense off of the rush or physically overpower defenders in the zone off of the cycle.

For a player like Kadri, that type of offensive strategy effectively leverages his strengths to the team’s advantage. He’s an extremely dangerous transporter of the puck, as only Nathan MacKinnon completed more controlled zone entries, entries leading to scoring chances, individual chances, and chance assists per-60 this season on the Avalanche. Although that underlying profile always existed, 2021-22 was the first season it manifested into eye-popping box score numbers.

It’s unfortunate that the wider public doesn’t acknowledge a player’s brilliance until it shows up on the scoreboard, and Kadri is no exception. People have every right to be skeptical about whether he can replicate last year’s production, but a strong foundational process should undercut any concerns, at least in the short term.

What Kadri should contemplate in choosing his next team in free agency is whether interested suitors can appropriately utilize him in their lineup. A player’s potential fit has just as much of an impact on their production as their talent or skill level, but that distinction often takes a backseat when salary is involved. Rumored destinations such as the New York Islanders, Seattle Kraken, or Detroit Red Wings offer varying degrees of surrounding talent and stylistic fit, neither of which is an issue to consider with the Avalanche.

Although this iteration of the Avalanche only just broke through and won their first championship, the age and ability of their core group of stars have set the franchise up for an extended run of success. Take a look at the team’s top scorers on a per-game (P/G) basis from last season (those who are signed through 2022-23) and their respective ages.

Of the players still with the team after the draft and the beginning of free agency, all of their top five are still under the age of 30, and three are younger than 27. Additionally, bringing back Kadri would mean all of the Avalanche’s top seven Scorers by points per game (P/G) remain in the fold, and that’s without considering potential breakout campaigns from the likes of Bowen Byram and Alex Newhook.

It should be noted that the above table does not take into account players who may have switched teams this offseason. Apart from the Toronto Maple Leafs, the other four teams each lost one player either through trade (Kevin Fiala) or free agency (Andre Burakovsky, Mason Marchment, and Anthony DeAngelo).

Also buoying the Avalanche’s future outlook is that none of their closest competitors in the Western Conference significantly improved this offseason, with most going sideways or seeing their talent pool deplete considerably.

The Calgary Flames watched Johnny Gaudreau choose the Columbus Blue Jackets in free agency and promptly swapped Matthew Tkachuk for Jonathan Huberdeau and MacKenzie Weegar. The Edmonton Oilers’ big move was replacing veteran goaltender Mike Smith with the younger Jack Campbell. The Minnesota Wild lost Fiala and Cam Talbot while putting their faith in an aging Marc-Andre Fleury. The St. Louis Blues should see improvement from their young stars but will also miss Ville Husso and David Perron next season while grappling with the downswing of Ryan O’Reilly’s career. The Los Angeles Kings added Fiala to their burgeoning youth project, but have depth concerns.

Lastly, the Vegas Golden Knights – the last team to beat the Avalanche in a playoff series – gave away sniper Max Pacioretty and promising defender Dylan Coghlan as part of their annual cap-juggling act. They still have a trio of restricted free agents left to sign while still technically being over the cap. A fully healthy season from Jack Eichel (and the rest of the roster for that matter) should bring them close to their peak but it’s no guarantee.

The Avalanche by no means escaped this offseason unscathed, losing Burakovsky (Kraken) and Darcy Kuemper (Washington Capitals) to potentially go with Kadri leaving for greener pastures. Even so, no one made significant gains on the defending Stanley Cup champions and the West looks to be wide open for taking once more in 2022-23.

Kadri Has Tough Decision to Make in Free Agency

Although teams may be hesitant to award Kadri an enormous salary on a lengthy deal, someone is sure to offer him a healthy raise on the $4.5 million he earned annually on his last contract. His decision boils down to deciding what he values ​​most as he moves into the back half of his career among financial security, personal accolades, and team success. The Avalanche’s Stanley Cup win takes care of that last point, but it remains a tricky situation to navigate. Since he likely will never possess as much negotiating leverage as he currently does in coming off of an unexpected All-Star campaign, it’s not a foregone conclusion either. The long wait for his decision says as much.

Marko is an aspiring sportswriter with a passion for crafting stories while using a combination of the eye-test and (shudder) analytics, which is complemented by an academic background in criminology and political science.

When not covering the Colorado Avalanche and Pittsburgh Penguins for The Hockey Writers, he can also be found pouring countless hours into various sports video games franchises, indulging in science fiction novels, and taking long runs around his neighborhood.

Marko can be reached through his personal blog at unexpectedgoals.ca, and you can yell at him by following him on Twitter and other social media seen under articles like this one.

Bitcoin Is Ray Of Hope In Britain – Bitcoin Magazine