Cosmos rally to win over Scorpions 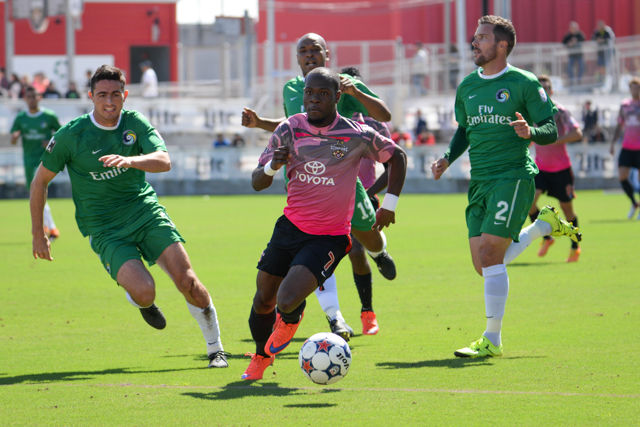 There are a few different scenarios that could lead the New York Cosmos to finish atop the North American Soccer League’s Combined Standings and clinch home field throughout The Championship, the league’s four-team postseason tournament.

The Spring Season champions took a big step towards that goal Sunday afternoon, rallying for a 2-1 win over the San Antonio Scorpions at Toyota Field.

Unbeaten in their last four matches and winners of their last three, the Cosmos moved one point ahead of Minnesota United FC and are only two points behind first-place Ottawa heading into the final weekend of the regular season.

“It’s very positive for us to be able to earn these three points today,” Cosmos head coach Giovanni Savarese said. “We have to continue this way. Now next week we have to make sure we’re ready to play. We’re facing a difficult team in Tampa. We have to finish strong and get ready for the postseason.”

Trailing 1-0 at the half on Sunday, the Cosmos capitalized on a pair of set pieces to take a 2-1 lead. After a Marcos Senna penalty kick to tie the score, Ayoze García Pérez put the Cosmos in front in the 79th minute, curling a 26-yard free kick inside the near post.

“It was clinical,” Savarese said of Ayoze’s strike. “He said from the moment he put the ball on the ground and saw the goal, he knew he was going to put the ball there.”

The Cosmos (9-6-4) had the better of possession and more dangerous scoring chances, but the Scorpions entered the break with a lead as Billy Forbes capitalized on a failed clearance to score his fifth goal of the season two minutes from halftime to give San Antonio (4-6-9) a 1-0 lead.

“We had to change a few little things in order to do better in the second half,” Savarese said. “We had to do a better job in being more proactive and not reactive.

“There were a lot of situations in the first half where we complicated things for ourselves too much. We corrected them at halftime and did a much better job in the second half.”

The Cosmos equalized in the 62nd minute from the penalty spot after Gaston Cellerino was taken down inside the box. Senna took the kick and sent San Antonio goalkeeper Daniel Fernandes the wrong way, slotting his low shot inside the net to level at one. It was the Spanish legend’s third goal of the season.

“We already know he’s a master of taking PKs. He has a lot of quality and most of all a huge heart,” Savarese said of Senna, who will retire at season’s end. “He’s clever and he’s been very influential and important for us. The PK was at a key moment. He gave the team plenty of confidence in the way he converted the penalty.”

The Cosmos still need to beat Tampa Bay next Saturday, Oct. 31 at home to have a chance at finishing atop the NASL Combined Standings. It’s likely they’ll also need Ottawa to lose to Atlanta that same day. If the Fury and Silverbacks tie, the Cosmos need to win and make up a goal differential of two. The game on Oct. 31 also marks Senna and Raúl’s last regular season games before retiring as Cosmos players.

“These are the wins that build character. It was very important today,” Savarese added. “It was an excellent second half after we had many things to correct at halftime. Now we can go to New York and finish very strong.”