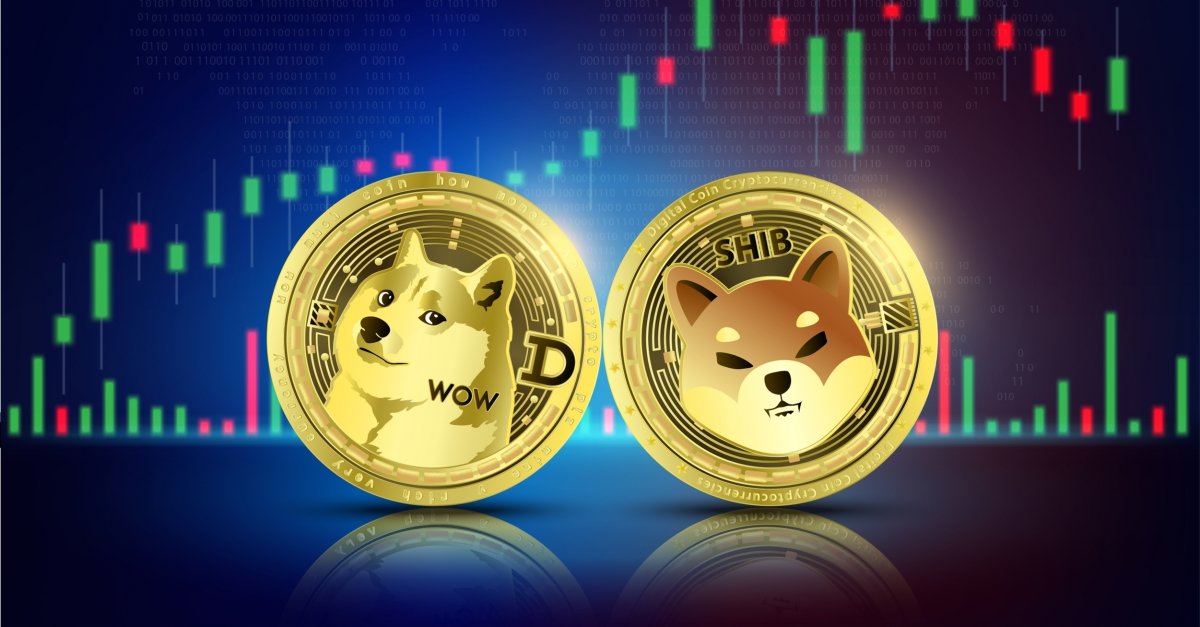 Dogecoin (DOGE) other shiba inu (SHIB) are the leading meme coins in the cryptocurrency sector, with multi-billion dollar valuations.

The dog-themed cryptocurrencies have trumped several layer-one tokens, decentralized finance (DeFi) coins and gaming cryptos to emerge among the top 15 largest cryptos due to their widespread popularity and cult-like following.

How are DOGE and SHIB different from each other? What is the current DOGE to SHIB exchange rate?

In this article we aim to answer important questions about dogecoin and shiba inu with relevant news and price predictions.

What is dogecoin and shiba inu?

Dogecoin and shiba inu are commonly known as meme coins due to their playful approach to crypto.

In 2013, dogecoin became the first dog-themed cryptocurrency. It’s based on a popular internet meme called ‘doge’, which featured a Shiba Inu dog from Japan.

Adobe engineer Jackson Palmer and IBM software engineer Billy Markus created DOGE as a joke to satirize the hype around cryptocurrencies. While Palmer is no longer working on the meme coin project, Markus is an advisor to the Dogecoin Foundation, a non-profit organization formed to support the dogecoin’s development.

Dogecoin has gained a cult following that has seen several celebrities, including Tesla founder Elon Musk and Shark Tank judge Mark Cuban, voice their support for the cryptocurrency.

Following the popularity and success of dogecoin, numerous dog-themed cryptocurrencies came into existence, the most popular of these was shiba inu.

SHIB was created by the anonymous Ryoshi in August 2020, although they are believed to be no longer associated with the project. Their last blog in May 2021 read:

”I am not important, and one day I will be gone without notice. Take the SHIBA and journey upwards frens.”

Shiba inu was initially dubbed the ‘dogecoin killer’ as the meme coin skyrocketed over 800% in the month of October 2021, hitting its record high of over $0.000088.

As of 30 August 2022, DOGE and SHIB were the two largest meme coins in terms of market capitalization. DOGE is the 10th largest cryptocurrency, with a market cap of $8.43bn, while SHIB is the 14th largest, valued at $6.86bn.

What is your sentiment on DOGE/USD?

Give DOGE/USD a try

Dogecoin and shiba inu were created in different growth phases of the cryptocurrency sector. They are designed differently.

Dogecoin, which arrived roughly seven years before shiba inu, was inspired by bitcoin (BTC). It was forked from litecoin (LTC) which is commonly referred to as a “lite version of Bitcoin”. Like bitcoin and litecoin, dogecoin uses the proof-of-work (PoW) consensus mechanism. However, DOGE does not have a capped supply like BTC.

Shiba inu was created at a time when minting new cryptocurrencies became fairly simple due to the innovation of smart contracts and virtual machines at ethereum (ETH). SHIB is an ERC-20 token created using smart contracts on Ethereum.

SHIB’s max supply was capped at one quadrillion tokens, with about 50% of SHIB’s total supply locked in Ethereum-based decentralized exchange (DEX), Uniswap.

In conclusion, shiba inu can be seen as the Ethereum-native counterpart to bitcoin-inspired dogecoin.

Historical price charts showed that the dogecoin price peaked about five months before the shiba inu price. The crypto bull market of 2021 saw DOGE surge from $0.0049 at the start of the year to hit an all-time high of $0.7376 by 8 May.

The dogecoin to shiba inu exchange rate was about 19,600 on 9 May 2021, according to data from CoinCodex.

About two months before DOGE hit its record high on May 8, 2021, Mark Cuban announced his National Basketball Association (NBA) team, the Dallas Mavericks, would start accepting DOGE as payment for purchases of match tickets and merchandise.

As the rally lost steam in the months that followed, DOGE posted monthly losses of about 20% each in June and July 2021. By August 2021, new meme coin shiba inu was seeing its popularity grow.

Speculators flocked to the meme coin dubbed the ‘dogecoin killer’ having seen DOGE’s meteoric rise in the first half of the year. Shiba inu’s price surged to an all-time of $0.00008845 on 28 October 2021.

Similar to dogecoin’s rise and fall, SHIB lost over 75% of its value by the end of January 2022.

In 2022, dogecoin’s value and shiba inu’s value have seen intense depreciation in the ongoing crypto bear market. As of 30 August, price charts showed SHIB has fallen about 85% below its all-time high. DOGE is down by around 91% from its record high.

In the past months, Tesla and Elon Musk-related news have been major price drivers for DOGE.

In January, Musk announced that Tesla would make some company merchandise available for purchase by DOGE.

On 19 June, Musk reiterated his support for dogecoin, tweeting that he would “keep supporting dogecoin”. DOGE posted a 14% gain after Musk’s tweet.

I will keep supporting Dogecoin

In its Q2 earnings report, Tesla revealed it held DOGE as a part of its digital asset holdings alongside bitcoin. The electric vehicle (EV) maker held digital assets worth $218m, as of 30 June.

In early August 2022, dogecoin developer Michi Lumin tweeted that the libdogecoin v0.1.0 had been released. According to developers:

“Libdogecoin is ac library to enable the direct integration of dogecoin into many different platforms in a lightweight manner, without developers having to procure deep blockchain experience.”

In other news, cinema chain AMC’s (AMC) CEO announced the company would accept DOGE and SHIB for online payments on its website.

6 July 2022, lead shiba inu developer Shytoshi Kusama said progress on Shiba Inu’s layer-2 network, Shibarium, was on track and “moving as fast as we can”.

Kusama announced the upcoming launch of a new shiba inu ecosystem token TREAT, which will be used as a reward token for its metaverse and games. Kusama also said a stablecoin called SHIB was expected to be released at some point this year.

DOGE and SHIB price predictions for 2022 and beyond

As of 30 August, CoinCodex’s shiba inu price prediction indicated the coin’s value could rise to $0.0000145 in one month’s time. Meanwhile, DOGE’s one-month prediction saw the coin trading at $0.073878.

CoinCodex’s technical analysis for DOGE and SHIB showed that the coins’ 200-day simple moving averages (MAs) stood at about $0.07 and $0.000017, respectively.

Note that analysts’ and algorithm-based price predictions can be wrong. Forecasts should not be used as a substitute for your own research.

Always conduct your own due diligence, and remember that your decision to trade or invest should depend on your risk tolerance, expertise in the market, portfolio size, and investment goals. And never invest money that you cannot afford to lose.

Why has DOGE been dropping to SHIB?

DOGE to SHIB has fallen over the years due to the price appreciation of SHIB since 2021.

Will DOGE to SHIB go up?

Nobody knows. DOGE to SHIB has been range bound in 2022 due to the ongoing crypto bear market. It remains to be seen which of the two memecoins will outperform the other.

When is the best time to trade DOGE to SHIB?

The best time to trade is after conducting a thorough research on the high-risk assets. Remember that your decision to trade or invest should depend on your risk tolerance, expertise in the market, portfolio size and investment goals.

Is DOGE to SHIB a buy, sell or hold?

The reason to buy assets on the market should be based on your research, risk tolerance, expertise in the market, portfolio size, and investment goals. Always do your own research. And never invest or trade with more money than you can afford to lose.