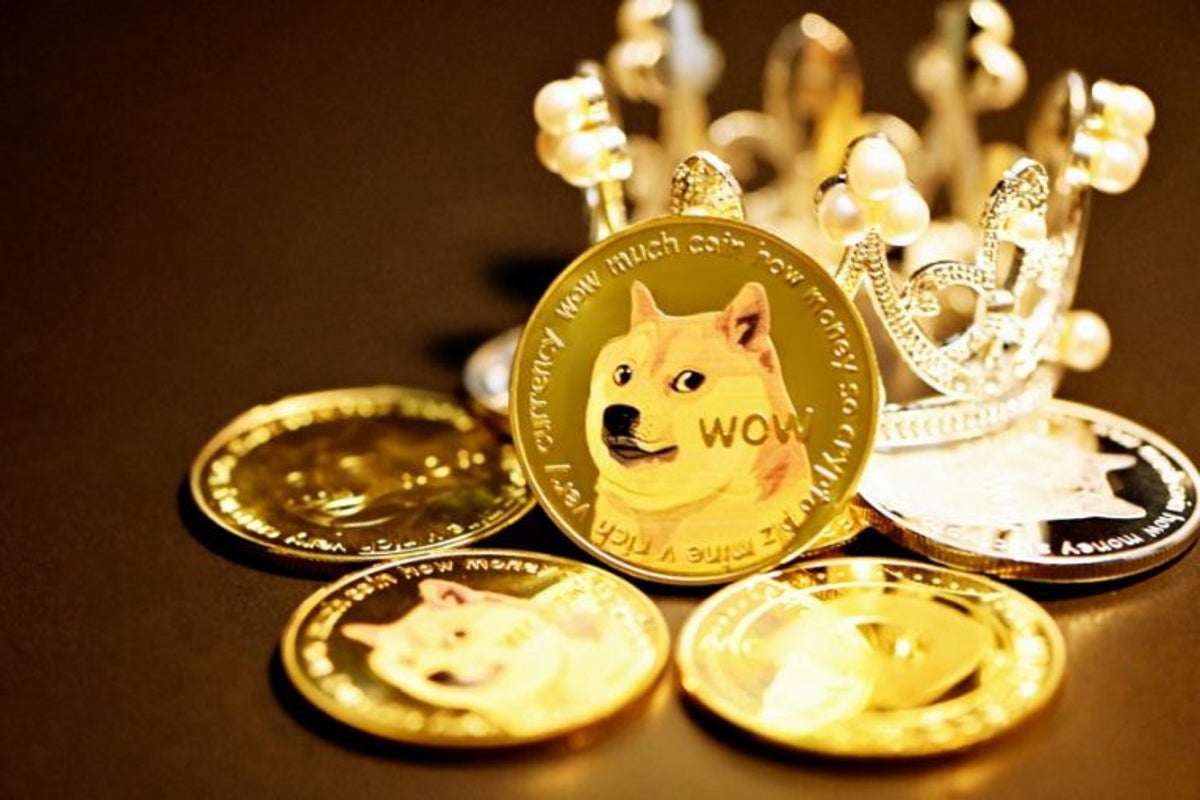 Already convinced by a bullish Dogecoin price prediction? You can buy DOGE on eToro, WeBull, Uphold and Gemini.

Dogecoin is perhaps one of the most unique and captivating offerings in the cryptocurrency space. It is the largest meme coin in the world and a widely recognized altcoin in the cryptocurrency industry. The ecosystem’s native token (DOGE) has a reputation for exhibiting colossal gains during bull markets, leaving many wondering whether right now is an ideal time to accumulate DOGE at dirt-cheap prices.

From the depths of the 2020 COVID-19 lows to DOGE’s all-time high (ATH) in May 2021, Dogecoin surged by over 64,000% – generating life-changing wealth for early-bird investors. However, is this time different? Will Dogecoin reclaim the spotlight once market sentiment reverses and mainstream investors flood the market? This article will explore these questions and more, providing you with a holistic price prediction for Dogecoin in the short and long term.

Dogecoin is a cryptocurrency inspired by a popular meme known as Doge – a Shiba Inu dog image with bright phrases written in Comic Sans that represent its internal dialogue. Launched at the end of 2013, Dogecoin is an open-source cryptocurrency stemming from a fork of the Litecoin codebase.

Billy Markus, the creator of Dogecoin, initially came up with the idea in an attempt to create a cryptocurrency joke. He believed that the more lighthearted altcoins would have a better chance of attracting mainstream attention than Bitcoin. Although Dogecoin entered the limelight in 2014, it didn’t achieve explosive growth until six years later.

In mid-2020, a viral video on TikTok created a chain reaction, causing the price of DOGE to jump sharply. The low price per coin of DOGE at the time caused demand to snowball as more investors believed they could get rich if the price hit $1 – and it almost did, achieving an all-time high in mid-2021 of $0.74. Another significant catalyst for Dogecoin’s development is Elon Musk, a business magnate who has talked about the project publicly on his Twitter account.

Similar to Bitcoin and Litecoin, Dogecoin operates under a proof-of-work consensus mechanism. The system is decentralized, meaning that no central authority controls it. Instead, Dogecoin is run by thousands of computers distributed around the world and supported by a technology known as a blockchain — a decentralized, distributed ledger that records the provenance of a digital asset.

Dogecoin’s growth is largely predicted on market sentiment. During extremely fearful times, Dogecoin underperforms; however, during euphoric times, Dogecoin has the potential to explode in popularity.

When analyzing Dogecoin’s market position it’s important to distinguish between market capitalization and price. Dogecoin’s low price can be deceiving to new investors, causing them to inaccurately gauge Dogecoin’s price potential. Market capitalization is calculated by multiplying the total circulating supply of coins by the current market price of a single coin. It measures the total value of a cryptocurrency on the open market and can be useful for determining growth potential.

At the time of writing, DOGE’s price is roughly $0.09. Therefore, if DOGE were to reach $1 investors would experience a return of 11x. Under the right market conditions, this price is definitely achievable; however, it assumes that Dogecoin still remains relevant in the next bull run. However, if DOGE’s price were to reach $10, Dogecoin would need to reach a whopping market value of $1.2 trillion. This value is more than the current market cap of the entire cryptocurrency industry. As a result, when making realistic price predictions, it’s paramount to take into account market capitalization.

Walker Holmes, the co-founder of MetaTope — a non-fungible token (NFT) project — is bullish on Dogecoin with the foresight that Elon Musk sticks with the project and continues to endorse it. While Holmes did not provide a price prediction, he justified his stance by the fact that Doge has a great community and “has the ability to attract a culture of content creators and creatives.” Musk’s purchase of Twitter, a vital artery of communication for the cryptocurrency work, could be massive if he continues to support it.

Holmes’ prediction is further supported by other experts in the space, such as Gavin Smith – general partner of crypto hedge fund Panxora. Like Holmes, Smith explains Dogecoin’s persistence by pointing to the project’s large and loyal community.

Kevin He, chief operating officer at fintech firm CloudTech Group commented that the birth of Dogecoin was originally a joke, and added: “We believe that cryptocurrencies like Dogecoin, which are completely useless and the value is purely supported by the community, will not gain value in the future.”

Changelly is a useful tool that can be used to try to predict the future prices of Dogecoin and many other digital assets. ​​It offers a wide range of forecast data that it derives through artificial intelligence and market research. Overall, Changelly suggests that Dogecoin’s price should increase over the next few years, although not without risk.

Changelly has an optimistic outlook on Dogecoin in 2023. The minimum Dogecoin price is predicted to be $0.12 in 2023, while its maximum price can reach $0.14. The trade price will typically be about $0.13. From current prices, this would be over a 40% return on investment (ROI).

While 2030 may seem far away, Changelly still has provided price predictions for Dogecoin. Note, it is important to take this prediction with a grain of salt given how far it is in the future. This prediction also assumes that both the cryptocurrency market and Dogecoin will still be relevant.

Where to Buy Dogecoin

Dogecoin can be traded on major exchanges such as eToro, WeBull, Uphold and Gemini. Many of these platforms allow you to purchase Dogecoin using your credit card, through swapping features or through different trading pairs such as DOGE/USDT.

How Long Will It Take for Dogecoin to Reach ATHs?

Like the overwhelming majority of altcoins. Dogecoin’s ability to reach its ATHs is largely dependent on the performance of Bitcoin. Bitcoin is the flagship of the cryptocurrency space and possesses significant first-mover advantages and a dominant market position.

Most experts, such as Benjamin Cowen, believe the bull market could be revived by the end of 2023, which would set the stage for Dogecoin to increase in price. However, these forecasts are purely speculative and are based on the views of market analysts. It is impossible to precisely foresee how prices will fluctuate in the future.

Another key determinant of the crypto market’s trajectory is Bitcoin halvings. Many investors believe that the value of Bitcoin and many popular altcoins will increase and may achieve greater growth between now and Bitcoin’s fourth halving in 2024. This is another time period in which Dogecoin could reach its ATH of $0.74.

Where to Store Dogecoin Safely

Software wallets enable crypto holders to securely store their digital currencies and tokens in one place. These types of wallets allow users to buy, swap, lend and earn cryptocurrency in an efficient manner. The Coinbase Wallet is an example of a software wallet.

Ledger claims to offer the highest level of protection for crypto assets, making it an excellent option for a hardware wallet. In addition to Dogecoin, Ledger hardware wallets support more than 1,800 altcoins including Ethereum (ETH), Dogecoin (DOGE), Chainlink (LINK) and all ERC-20 tokens.

ZenGo is one of the most secure mobile crypto wallets in Web3. Leveraging MPC technology, ZenGo removes the vulnerability of the need for a private key, making it much more secure than traditional crypto wallets. ZenGo allows users to buy, sell, send and receive Dogecoin and securely connect to Web3 dApps.

So, Is Dogecoin a Good Investment?

If you are a long-term investor and you think meme coins like DOGE have a future, then it may be a good time to start building a Dogecoin position over the coming months. Dogecoin is an extremely risky investment opportunity with a potentially high payout. It is the largest meme coin, a top 10 crypto by market capitalization and has one of the strongest social presences in the Web3 industry. However, given both the inherently volatile nature of cryptocurrency and the speculative nature of Dogecoin, prudent investors will only invest money they are willing to lose.

Dogecoin may be trading at about $0.026 according to Changelly’s price prediction. This would mean an increase of over 200% but there are no guarantees.

Changelly predicts that Dogecoin will reach about $1.68. This would be an incredible feat and would require a massive 2,200%.

Dogecoin is far from dead and recently saw a decent resurgence. This doesn’t necessarily mean that it will reach all-time highs again but it likely won’t be reaching $0 any time soon.