Dogecoin Jumps in a Sign of Excitement While Macro Shifts – Trustnodes 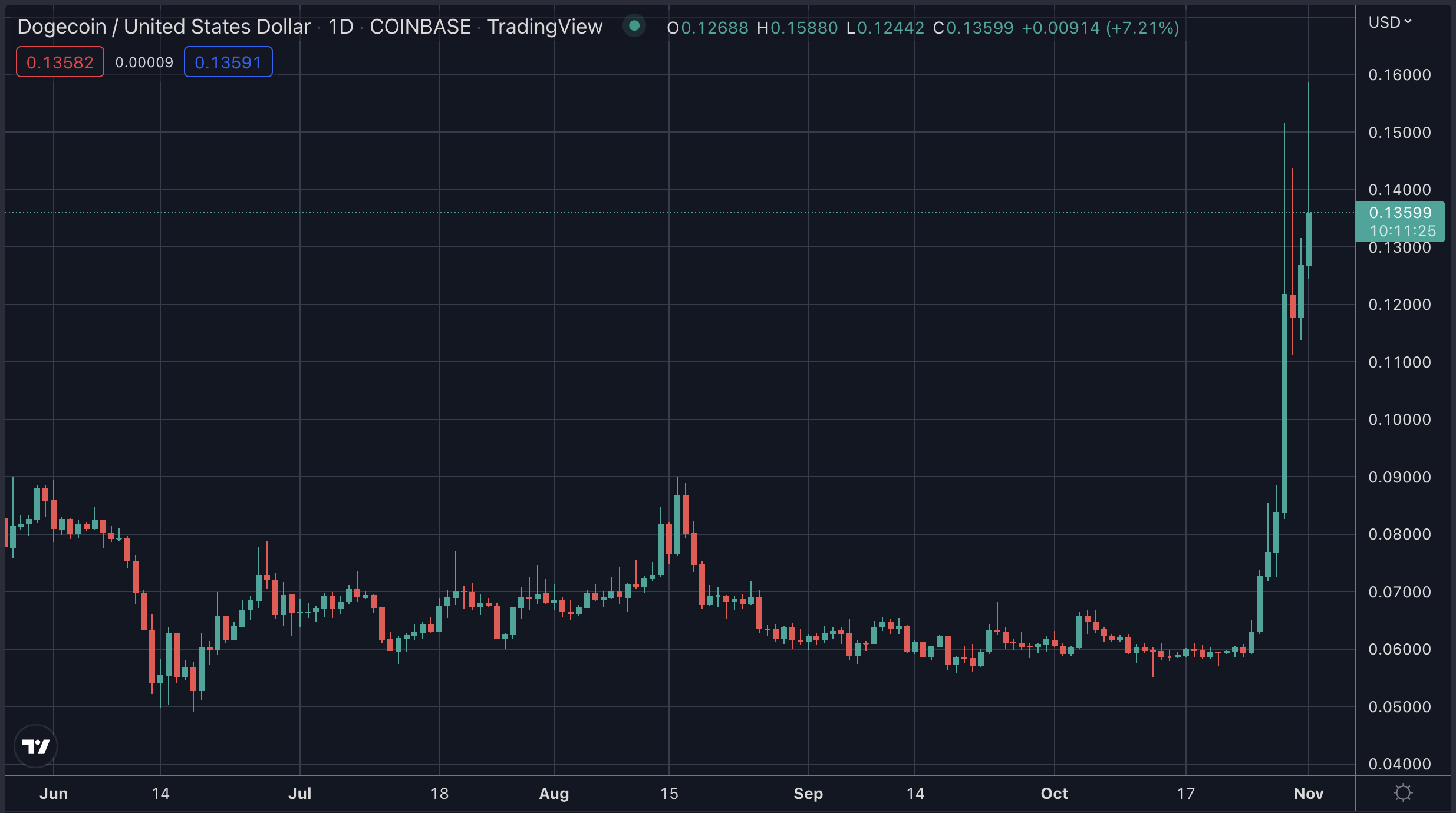 Dogecoin is up again, gaining 17% after briefly touching a recent high of 16 cents. The currency had mini-crashed to 11 cents from 15 cents following a sudden bull run from 6 cents.

Now it’s at it again, trying to keep its gains and even slightly higher, with numerous theories circulating to explain its rise.

Elon Musk, the CEO of Tesla, SpaceX and now also Twitter, is well known as a doge booster – as traditional media would call it – or at least was so known because he hasn’t mentioned doge in a while.

There’s speculation as Twitter’s new CEO, Musk might add a crypto wallet to turn the platform into WeChat, but instead of CNY envelopes you may get crypto envelopes.

Is Musk really that into crypto however? Tesla barely lasted two months when it tried to accept bitcoin. Also the blue tickers revolt might have a lot more to worry about than crypto currently, but they made Discord stand down. Plus, would it actually make sense?

As ancillary, probably. If people want to use crypto, then why not. But people, even cryptonians, do generally still operate in fiat, and so if Twitter is going that wallet path then you’d think it would primarily be about fiat.

With the scale of Twitter moreover you don’t want to entice uninformed individuals to put their savings anywhere near crypto without big disclaimers about invest only what you can afford to lose, because although some are here just for the bull, we get to ‘enjoy ‘ the bear too.

And it’s that bear, most likely, which explains this dogecoin jump. It’s not the first, it probably won’t be the last, and Musk is probably a sideshow to it.

Because the Dogecoin excitement has been a factor since time immemorial in crypto terms, since 2013. It’s always the first to jump, always to have the last jump in a hello to the bear too.

Always, and it shall forever remain so, is not necessarily the case of course because it jumped in a wow way when there was excitement due to it having a smaller market cap than the big boys. Now, it has a bigger market cap, but still jumped.

If bitcoin rises, or eth rises, then people expect a ping pong between the two, and if the two are rising, then other cryptos will rise as well. So goes the thinking.

Not all cryptos however. Some don’t keep up and are effectively dead. EOS and Monero are two easy ones from the 2018 bear and 2015 with neither then quite catching the bull.

It is tempting to say Cardano might be this wave’s equivalent, although that has shown some staying power. Maybe Solana, but it may also be the case some of the defi tokens don’t catch the bull wave unless they actually give some of the fees to token holders. SEC be damned as it always has been in this case.

Dogecoin though? It was at risk of not catching the bull wave that has gone, but doge is a fun memory for many, so it had, it had great fun.

This means that in the battle between disbelief and let’s give it a try, confidence may be rising for the latter. And although if you believe it can’t be disbelief, it is still disbelief because emotionally it doesn’t feel like it’s gone happen.

Rationally however, all the signs are there, this doge excitement being just the latest. Where macro is concerned as well – although it isn’t too clear bitcoin really cares about it since it is not based on debt – the Powell pivot is now pretty much guaranteed because how much higher can he really still go.

And the best bit about Powell is that it might actually be even more bullish, where crypto is concerned, if he hikes too much or breaks something because then he’ll have to turn the printer on again.

The Fed is currently targeting a higher than neutral interest rate policy. By definition this means they will have to cut to get to neutral at some point, or deflation will do it for them.

As the market has priced in 5% interest rates, it’s unlikely there can be such a thing as a bad surprise from Fed at this stage where cryptos are concerned and where the time-frame is more than six months, because interest rates are at 3.25 %, but there can potentially be good surprises.

Germany spent $200 billion on just covering higher energy costs, which is effectively burning money, but necessary. Imagine how much Europe as a whole can spend on an industrial renewables revolution. Certainly at least a trillion, maybe two trillions.

This would be an investment. Like a household buying solar panels with an upfront cost to then enjoy free energy for years, the European Union can have some sort of a Marshal Plan to ramp up renewables manufacturing in Europe and even to mandate its demand.

Should it be compulsory for every household to buy solar panels and maybe even small wind turbines to put them in front of the roof, like churches do with them revolving peackocks? You can have some net around the wind turbine as well to keep birds out.

The answer to that right now is probably no because manufacturing just wouldn’t be able to meet demand, but for new housing maybe it should be yes.

Every new car should be solar roofed too, every public building. With such measures, focus and effort, you could in a complete emergency do this even within a year, but Europe can do it within five years.

They can call the plan ‘Europe: The New Saudi Arabia.’ And they should move ahead with it because why on earth should we let a crisis go to waste. Or else we’ll get tits out for Scholz again.

Unlike even a few years ago, we now have the capabilities to be energy self-sustainable. Since these are raw investments that naturally will pay off, and since they have the ability to provide significant competitive advantage, such a plan would be good politically in regards to climate change, good economically in lowering costs, good healthwise in clean air, clean water , and less pollution, and good for national security too.

They would also be very good for innovation if a significant portion is manufactured in EU, with hydrogen power being just one example.

So the energy problem in theory is solved and if it is solved in theory, then in practice it will probably just be a matter of time.

In the near term however there is a political problem especially in UK with the unelected new Prime Minister Rishi Sunak planning to both increase taxes and cut spending by $50 billion.

He claims the right to rule because he claims he is applying the election manifesto, but the manifesto promised higher spending and even tax cuts. His manifesto instead should face the voters who have the right to decide just who exactly has the right plan for the country.

Labour’s Keir Starmer should maybe even test it with a no-confidence vote so that the public can see just what MP thinks unworkable austerity and utterly uncompetitive tax hikes on mostly the 9 to 5 working public are the right plan for growth.

That’s especially now when there’s a consensus that growth is the only way out and that it is actually time to invest to grab the new opportunities from innovation, like renewables.

The Sunak plan instead is one more for recession, and if he thinks markets will reward him for it, he should just look back at the stagnation and what it did to debt.

UK is a small country however in the global macro. Biden for US had a better plan whereby a new band was added to the tax rates for the very richest to make taxation more equitable, and trillion dollar plans were laid for infrastructure investments. Europe will probably follow this plan.

Europe will also have to continue raising interest rates to probably at least 3% in the near term, and if Fed slows down that should strengthen the euro, lowering DXY.

So the macro is changing, and while Russia-Ukraine continue their fierce battles, the effects of it on the wider world are sort of being quarantined, with Turkey deciding to keep going on the grain deal regardless of Russia’s views because a grain blockade is a fairly direct attack on Turkey, Europe and the wider world.

The more this continues the less will people be willing to put up with Russia where they’re affected, a country that has banned Facebook. And while some speculate about Republicans, some Americans maybe need to realize that Ukraine is an EU candidate country, and while EU is not quite a country annexing it is not too different for Europe than annexing Alaska would be for US.

The time for debate with Russia was when we sent all the elected, Macron, Scholz, he even met Biden last year during the first build up. Russia’s dictator Vladimir Putin was unwilling to agree to anything, and so no one was quite given a choice on this matter.

This macro background is probably a small part of the crypto movements however because the entire crypto market cap is still far too small, meaning it has plenty of room to grow regardless of the macro conditions.

Instead it is probably more the case there’s grounds to think we may have found a floor, and so kids, like dogecoin, are getting excited with any macro improvements being just a bonus.