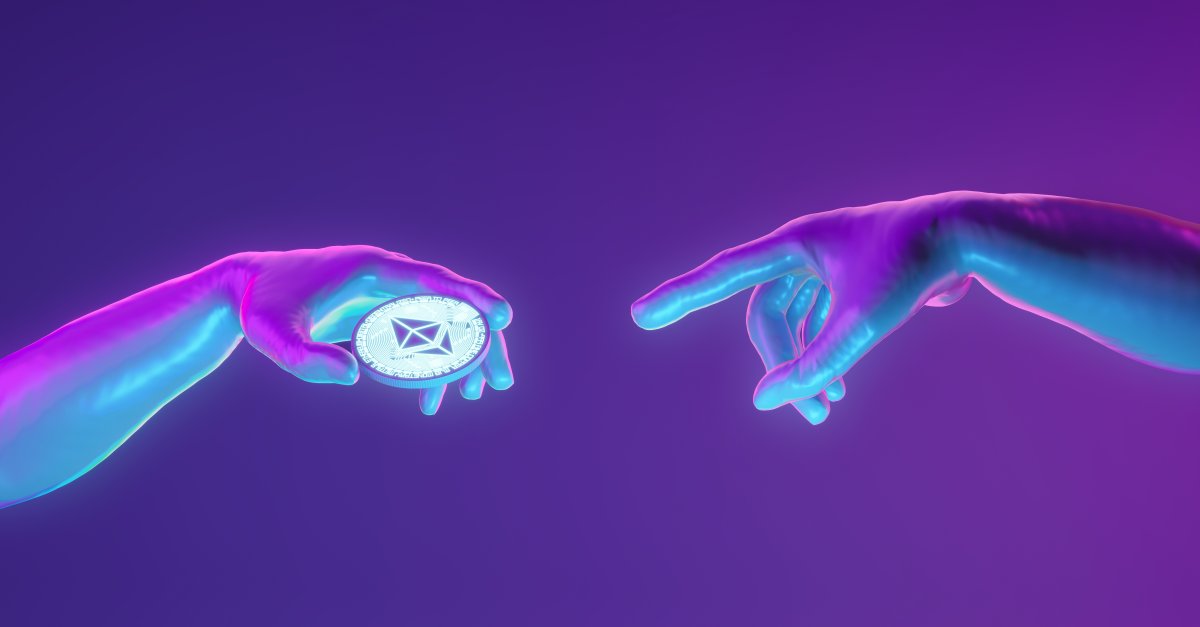 Both ethereum and cronos are trading down over 50% year to date. Photo: Unknown man / Shutterstock

A long-awaited update to the Ethereum (ETH) blockchain is expected to shake up the cryptocurrency market.

The Ethereum ‘Merge’ will see the blockchain transition from its current energy-intensive proof-of-work (PoW) process to the more environment friendly proof-of-stake (PoS).

The wait for the transition seems to be ended, with ‘The Merge’ event set to commence on 6 September. The ‘Bellatrix’ update will go live on the Beacon Chain, kicking off the first phase of The Merge, according to Ethereum’s timetable. The Merge is anticipated to be completed on September 15 at 12:30:00 PM CET.

The Merge is coming: UPGRADE YOUR CLIENTS!

Many market players anticipate that the merger could have a favorable impact on the price of ether in the coming months.

Cronos (CRO), on the other hand, is powered by Ethermint, a PoS chain compatible with Ethereum. Cronos intends to dramatically extend the chain’s decentralized finance (DeFi) ecosystem by enabling developers to quickly migrate applications and smart contracts from Ethereum and other Ethereum Virtual Machine (EVM) compatible chains.

As of 6 September 2022, ETH’s year-to-date (YTD) losses were around 55%, compared to CRO’s YTD losses of approximately 79%, according to CoinMarketCap.

In this article, we have compiled important information about ethereum and cronos. You will also find a historical price analysis of ETH to CRO price rates, analyst view and ETH/CRO predictions.

What is ETH and CRO?

Ethereum (ETH) is a blockchain-based platform that allows developers to create and deploy decentralized apps (dApps). As a result, users can develop a decentralized application whose decision-making power resides with the program’s participants.

The widely anticipated update, Ethereum 2.0, aka ‘The Merge’, is predicted to assist the second-largest cryptocurrency by market capitalization in achieving its long-term scalability and adoption objectives.

It is expected that Ethereum’s shift to a PoS consensus could make its blockchain more scalable, accessible and less energy-intensive than the current PoW architecture. As PoS replaces PoW, miners will be replaced by stakers, who will be required to lock up their ETH tokens in smart contracts to collect staking incentives for verifying transactions.

Meanwhile, Cronos (CRO) is the first blockchain network that supports DeFi, non-fungible tokens (NFTs) and the metaverse, and interoperates with the Ethereum and Cosmos (ATOM) ecosystems.

Cronos intends to expand the Web3 user base by enabling developers to rapidly move applications and crypto assets from other chains with cheap cost, high throughput and rapid finalization.

Crypto.com works as an exchange platform and mobile application where users can buy, trade, and earn digital assets. CRO is both the Crypto.com blockchain and the Cronos EVM chain’s native cryptocurrency. In addition to powering the ecosystem, the CRO token is also used for staking, paying users with free Netflix and Spotify subscriptions, and other cashbacks and prizes.

What is your sentiment on ETH/USD?

Give ETH/USD a try 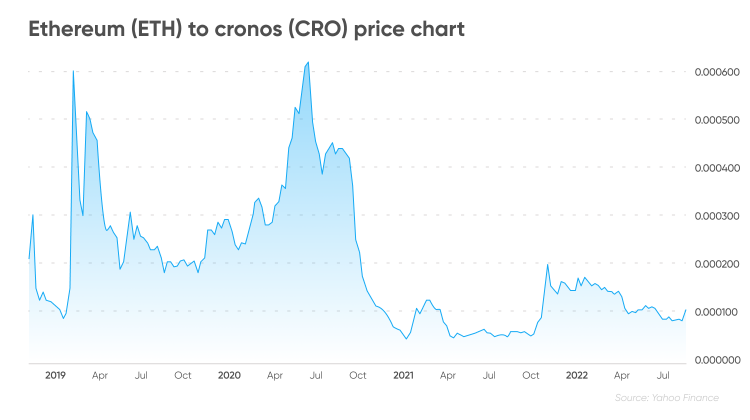 Ethereum was launched in July 2015, and has since had a return of investment (ROI) of 58,300%. Cronos was launched in November 2021 and has returned an ROI of 504%, suggesting that ETH has been the better-performing cryptocurrency.

How to Buy Bitcoin Germany in September 2022

In 2021, cryptocurrencies began gaining mainstream acceptance. Riding the wave of positive sentiment, ETH reached its all-time high price of $4,891.70 on 16 November. Similarly, CRO reached its lifetime high of $0.9698 on November 25, 2021.

Intriguingly, the highest recorded price of ethereum and cronos occurred on 10 November 2021, when ETH peaked at 40,796 CRO. The ETH/CRO exchange rate has decreased 65.71% from its all-time high.

In June, the suspension of withdrawals on the Celsius (CEL) cryptocurrency lending platform reinforced the bear market, and cronos fell to $0.09902 on 18 June.

ETH and CRO have undergone several important milestones lately, which may drive the exchange price.

The Ethereum Foundation revealed the formal criteria for the long-awaited upgrading of The Merge blockchain to a proof-of-stake consensus mechanism in August 2022.

The Merge will begin in many stages, beginning with the Bellatrix update on September 6 and concluding between September 10 and 20.

The Beacon Chain will trigger the Bellatrix upgrade on September 6th. This update is responsible for initiating the remainder of The Merge procedure.

The Terminal Total Difficulty (TTD) figure that triggers The Merge will be 58,750,000,000,000,000 trillion after this. This TTD is anticipated to be attained between 10 September and 20 September. The Ethereum devs have indicated in previous conversations that they are targeting 15 to 16 September.

During this time, the degree of difficulty will climb to the point where PoW crypto mining will become impossible.

When TTD hits 58,750,000,000,000,000 trillion, the network’s execution layer will be merged with the new consensus layer, and the network will shift to the new proof-of-stake consensus protocol.

Cronos announced the introduction of the Chain Ambassador Program in September 2022 to begin bringing in additional retail customers to see the use cases of Web3.

As a ‘CROnaut’, participants would have the following core responsibilities: spreading the word about the Cronos ecosystem and getting new users; contributing to the growth of the ecosystem and the community; attending regular meetings and involvement in community discussions; creating, curating and maintaining Cronos ecosystem content; and organising, promoting and conducting events and workshops.

ETH to CRO forecast: Predictions for 2022 and beyond

According to Messari statistics, the total number of unique addresses active on the Ethereum network grew to 529,156 on 6 September, from 466,381 on 30 August – a gain of 13.46%. This indicates that more buyers are joining the market in the wake of the Ethereum 2.0 update.

Similarly, Cronos saw a slight rise in unique addresses from 550 on 30 August to 580 on 6 September, a more than 5% increase.

It should be noted that analysts’ and experts’ price projections can be wrong. Forecasts should not be utilized in place of your own research.

Always do your own due research and remember that your choice to trade or invest should be based on your risk tolerance, market knowledge, portfolio size, and investment objectives. Never invest more money than you can afford to lose.

Why has ETH to CRO been rising?

Market sentiment for Ethereum is favorable ahead of the widely anticipated Ethereum 2.0 upgrade, which may have translated into a bullish ETH to CRO forecast. Note that these predictions can be wrong. Always do your own research before investing. And remember to never invest or trade more money than you can afford to lose.

Will ETH to CRO go up or down?

As of 6 September, market sentiment was neutral. However, with The Merge date coming, ETH may have an advantage over CRO, implying that ETH to CRO could rise. However, it is impossible to say for certain.

When is the best time to trade ETH to CRO?

The best time to trade ETH to CRO is after you have done your research and taken into consideration your attitude towards risk, the spread of your portfolio and expertise in the market, among other factors. Crypto markets are open 24/7, and the highest trading hours tend to be 8.00 to 16.00.

Is ETH to CRO a buy, sell or hold?

It is widely expected that The Merge could have an unprecedented impact on ETH/CRO price.

Whether this makes ETH/CRO a buy, sell or hold is a question that you will have to answer for yourself. Before you do so make sure to conduct your own research. Prices can go down as well as up. Remember to never invest more money than you can afford to lose.

AAVE Price Analysis: AAVE Preparing for its Return inside the Parallel Channel!

How to Buy Bitcoin Germany in September 2022