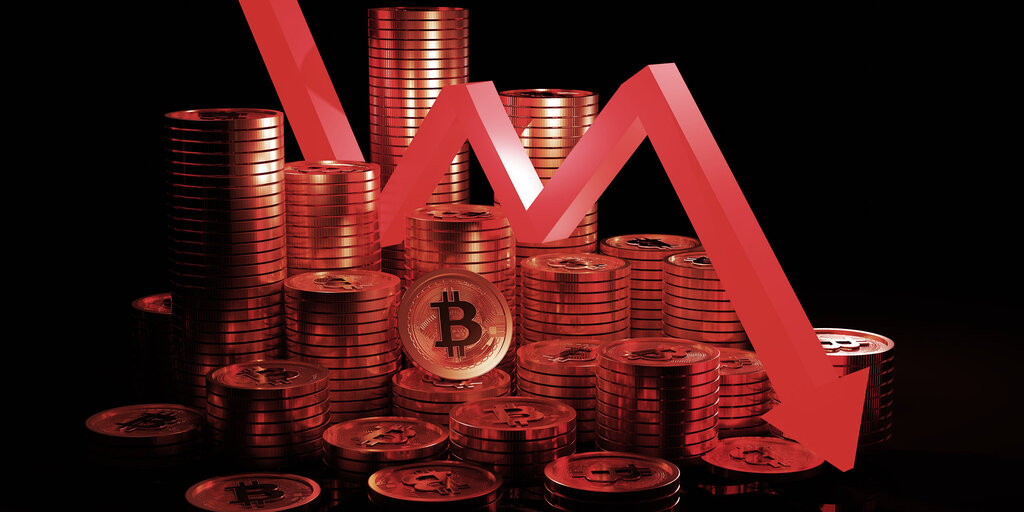 The sugar high of the Ethereum merge on Thursday led into a dour weekend of red for both the newly miner-free ETH and top crypto Bitcoin.

Ethereum is down from its pre-merge perch of $1,580 to $1,335 as of this writing, following a steep drop of 6% within hours of the merge and down 15% overall late Sunday.

Bitcoin, meanwhile, fell to $19,414 on Friday, and saw a brief rally take it above $20,000 on Saturday. The boost was shortlived, however, with the largest cryptocurrency by marketcap returning to its Friday lows as the weekend drew to a close.

Ethereum was down 22% for the week, and Bitcoin was down 10%. The declines echo a similarly down previous week in which overall economic metrics—ranging from the Consumer Price Index to traditional market indicators Nasdaq and the S&P 500—also fell.

But Ethereum’s sinking fortunes following the merge believed some analysts’ assertions immediately following the upgrade that the impact of the merge on the value of ETH had already been priced into the market.

The Merge success was already priced in, or was insignificant short-term to the market? pic.twitter.com/hUsx2ThDBg

Prior to the conversion, some had even predicted a “merge surge,” but the momentary jump in the price of ETH quickly evaporated. Prominent crypto Twitter commentator Doctor Profit announced today that he had sold all of his Ethereum.

The weekend also brought reports of the first “replay attack” targeting the Ethereum and the recently hardforked EthereumPoW blockchains. As with the invalid blockchain setting that briefly delayed the launch of ETHW, this exploit was caused by the failure to verify the chainlink ID to determine on which blockchain a transaction was taking place.

1/ Alert | BlockSec detected that exploiters are replaying the message (calldata) of the PoS chain on @EthereumPow. The root cause of the exploitation is that the bridge doesn’t correctly verify the actual chainid (which is maintained by itself) of the cross-chain message.

#Bitcoin enters the ‘Bottom’ phase, expecting targets between $18,000 and $25,000 till March 2023. The bottom is being formed. I will keep accumulating at these prices

This is based on TA only. Please consider FED’s next decisions. 0.75 already priced in, 1bps and we see blood. pic.twitter.com/LRAgoBl6va

But a lot hinges on the next move announced by the US Federal Reserve, he warns. While Doctor Profit feels Bitcoin’s price can withstand a 0.75 basis point increase in interest rates, a full 1 basis point will mean “we see blood.”

“Once the FED decides the great reset, all of us will be fkd,” he tweeted.

The last Federal Reserve meeting in July yielded a 0.75% increase. The next meeting, set for Sept. 21, will likely bring another increase—the main question being how big an increase. Some are expecting Federal Reserve Chairman Jerome Powell to announce a full percent hike.

Talking to a bitcoin trader