Ethereum Merge Complete: Is ‘The Flippening’ Next?

After the core development team behind Ethereum (ETH-USD) gave a mid-September window for the timing of the long awaited change from proof-of-work to proof-of-stake, “The Merge” became the biggest narrative in crypto. ETH had a massive bounce from the June 18th crypto low, rallying over 100% by mid-August.

But crypto has largely stalled out since. While Ethereum is still well ahead of the mid-June lows and has outperformed Bitcoin (BTC-USD) considerably over that time, the action since the merge has been less than stellar with ETH now down about 20% over the last 5 days. Turns out, “The Merge” has been a big buy the rumor, sell the news event thus far. Of course, there is some macro to blame here as well with hotter than expected CPI prints last week. While the price of the token doesn’t show it, the merge was a big success in a lot of ways.

The success of “The Merge”

Ethereum’s merge from proof of work to proof of stake is significant. From a purely technological perspective, it is incredibly impressive that the development team was able to pull this off without any issues. And judging by how many people viewed it live, this was one of the most significant events in the history of crypto. While I won’t try to hide my personal philosophical issues with the perceived decentralization of Ethereum as a network, I think the success of The Merge has actually de-risked ETH the currency quite a bit and given more credence to the cryptocurrency ecosystem as an investable idea.

If any of the staked value was somehow jeopardized from the potential failure of The Merge, that would have theoretically been catastrophic for the network effect that Ethereum has been riding over the last several years. Much of this growth has involved DeFi. Despite the proliferation of blockchains that now have a DeFi footprint, the market is still broadly reliant on Ethereum for base layer security:

Polygon, Arbitrum, and Optimism are all Ethereum layer 2 solutions that utilize Ethereum’s network. And this doesn’t include the market caps of the tokens of the protocols building out these applications. Some of the top dexes, lending protocols, content projects, and derivative networks are all built on Ethereum and utilize ERC-20 tokens.

Ethereum has survived a major turning point in the network’s history. And there is a lot of value in the rest of the cryptocurrency market that is likely a little bit safer than it was just a week ago. But as is often the case, we’re already looking forward to the next thing. Some of the attention in the Ethereum community has now turned from “the merge” to “the flippening.”

What is The Flippening?

The flippening is the theoretical moment when Ethereum overtakes Bitcoin as the number one cryptocurrency by market capitalization. As of writing, Bitcoin’s edge there is a little over 2:1 on a non-fully diluted ratio.

So how viable is the flipping? Frankly, I think it is possible it can happen, though I don’t think we’ll see it for several years. What I think gives the flippening idea some credence is the growth in on-chain wallet addresses for Ethereum. While the market caps of each coin don’t necessarily show it, the growth in Ethereum as a network has actually far surpassed that of Bitcoin if we’re judging purely by on-chain wallet addresses that have a non-zero balance. 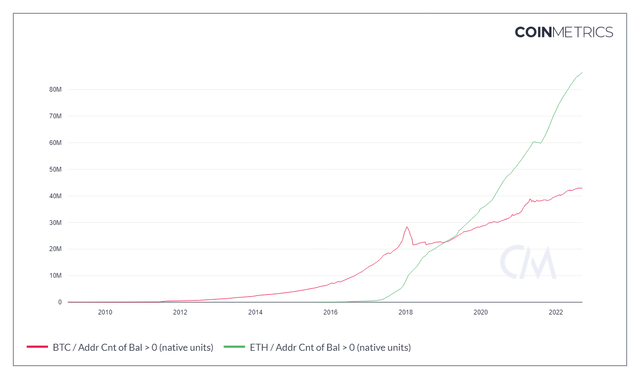 There are 86.4 million non-zero balance ETH wallets and 42.8 million non-zero BTC wallets. This shows a user-generated network effect that can’t be ignored and is largely explainable be the amount of additional layers and applications that have been built on Ethereum. After all, ETH is still the gas that is required for the transactions that those in the ecosystem are executing. Year to date, we’ve seen non-zero balance addresses grow 16.9% for ETH but just 9.5% for BTC. Looking out longer term though, the growth since the 2017 bull cycle top is staggering.

Since the top of the 2017 bull run in crypto, non-zero balance growth in ETH has been nearly 900% while BTC non-zero growth has grown just 54.5% over the same time frame. This has no doubt contributed to the adoption of Ethereum as a crypto ecosystem and has helped close the market cap gap between the two coins. It isn’t just non-zero balances were ETH has seen faster growth than BTC. While Bitcoin addresses with at least $100 are still a little under double that of Ethereum, BTC’s multiple in that metric has fallen from 5.6 during the depths of the bear market in December 2019 to under 2 today.

In the chart above we see outperformance in ETH during bull runs and under performance during bear markets. What’s interesting during the current bear market is how well ETH has been able to keep the ratio under 2 despite the declines in coin prices. During the 2017 bull run, Bitcoin topped in December while Ethereum actually topped in January of 2018. In late January and early February, the BTC/ETH $100 minimum address ratio was down to 2.3. It took about a year for BTC’s ratio multiple to double from the February 2018 low. We are again on track to see the same happen this time around, but from a much lower starting place, indicating Ethereum has strengthened as a network from cycle to cycle against Bitcoin.

Despite the growth in network addresses with non-zero balances and $100 minimums, Ethereum’s market cap never actually eclipsed its high from 2017 against Bitcoin. In June 2017, ETH as a percentage of BTC’s market cap hit 83%. During this recent run, ETH never got higher than 55%. 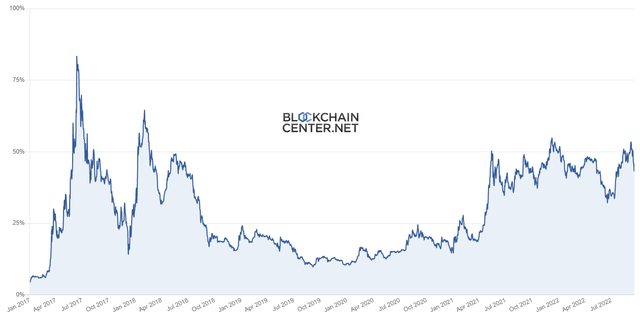 While I think there are some who may view this as proof of Bitcoin’s future dominance remaining, Ethereum’s market cap has actually held up fairly well despite the difficult comps from the 2017 bull run. The previous bull was a little different than this last one because BTC and ETH seemingly took turns rallying against each other. We see ETH’s MC to BTC MC percent hit 83% in June 2017 before collapsing to 14% in December 2017. After Bitcoin’s bubble pop in December, Ethereum’s market cap to Bitcoin’s market cap again rallied above 64% into February 2018. These were really unsustainable swings What we saw in the 2021 bull run was a bit more organized with all boats largely rising together.

I think the biggest risk to Ethereum, and by extension “the flippening” as a narrative, is regulation. Even though ETH can now be positioned as a more environmentally-friendly crypto than BTC, one could try to argue that ETH is now a security after shifting to proof-of-stake. I don’t personally agree with that argument, but it is something that should be considered when making crypto investments. Additionally, the SEC is specifically cautioning banks on how they custody cryptocurrencies, potentially making it cost-prohibitive for some to offer the service.

While I still believe we’re a couple of years away from Ethereum overtaking Bitcoin by market cap, I do think it could be argued the “flippening” has already happened when it comes to users. Most of the DeFi is happening on Ethereum. Ethereum is still in command of the NFT market judging by sales volume and buyer metrics. Whether all or any of these things continue is unclear. But if you believe crypto is here to stay, Ethereum is going to continue to be a top layer 1 smart contract chain in the industry. The network effect has been faster than that of BTC based on on-chain wallet addresses and there is no question there is more being built on Ethereum and its scaling chains than on Bitcoin from an application standpoint.