With less than three days to Ethereum’s pivotal Merge transition, its advance on bitcoin is cooling as macro investors await August’s inflation reading on Tuesday.

Currently trading down more than 3% on the day at $1,728 per coin, ether outperformed bitcoin in August yet the trend has broken over the past week. Bitcoin, which had lost investor interest through August, has rebounded since the weekend and is changing hands at $22,369, up more than 16% where it stood five days ago.

Even if the merge is successful this week, the crypto market’s enthusiasm for the upgrade could fall short if inflation reading comes in higher than the Federal Reserve wants.

As with stocks and real estate, the macroeconomic story of inflation remains the key driving force behind crypto asset performance according to Talati.

“In terms of monetary policy, the decline in the July CPI can likely be repeated in August given the lower energy prices and provide room for a market-friendly Fed (Sep 21st),” JP Morgan’s cross-asset team said in a Monday note .

The US Dollar Index (DX-Y.NYB), which investors use to gauge interest in risk assets, recently peaked September 5 more than 15% above where it stood at the beginning of January. Since then, its value has softened. When the US dollar strengthens, the cost to borrow capital becomes more expensive, which often lowers investor interest in higher-risk assets such as stocks and cryptocurrencies.

“For Ethereum, we are definitely expecting to see some positive price action this week,” Talati said. “The real positive price appreciation is probably going to be felt months following the event.”

To be sure, how ether will perform later this week remains a debated topic among analysts.

Despite an “uncertain macro picture and in the wake of a traumatizing string of liquidations throughout the crypto industry, we continue to believe that the long-ETH trade is undercrowded,” Fundstrat’s Sean Farrell said in a Friday research note.

On the other hand, Yuya Hasegawa, a market analyst with Tokyo-based crypto exchange BitBank, said early Monday morning the Merge’s completion could trigger a “sell the fact” dynamic where investors unload their ether following the upgrade’s completion.

The ether-to-bitcoin ratio (ETH BTC), which serves as a barometer for the second largest cryptocurrency’s performance relative to bitcoin, has fallen nearly 8% over the past five days after reaching its year-to-date high on September 6. 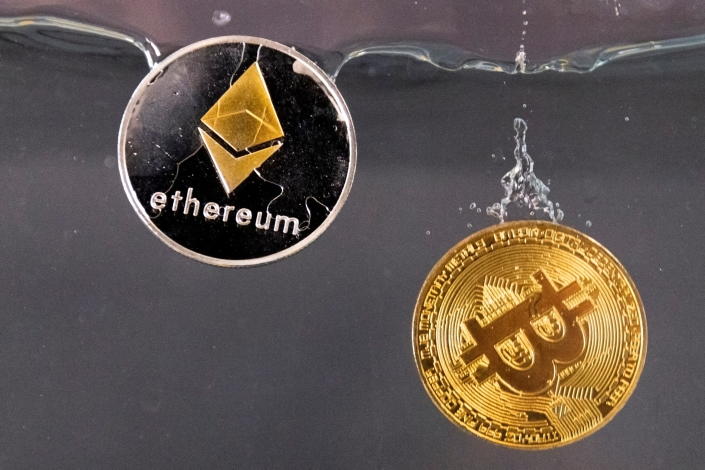 Souvenir tokens representing cryptocurrency Bitcoin and the Ethereum network, with its native token ether, plunge into water in this illustration taken May 17, 2022. REUTERS/Dado Ruvic/Illustration

Set to immediately drop the blockchain’s energy consumption by 99.9% and potentially create structural supply changes, the Merge has become the crypto market’s most optimistic story in recent weeks.

However, there’s never been an upgrade of this scale in crypto’s 13-year history and a Monday investment flow report on exchange-traded products by CoinShares shows investors may be growing warier. Ether-related products saw a total of $62 million in outflows last week, according to the report.

Ethereum’s core developer team behind the upgrade have run a number of “dress-rehearsal” tests for the merge in recent months giving crypto projects and firms the opportunity to prepare in advance for the update.

Previously, centralized exchanges such as Binance and Coinbase have announced they will pause ether-related withdrawals and deposits for the period.

The Merge is set to finish this week between late Wednesday night and early Thursday morning, according to Ethereum network tracking site, Ethernode.

“At this point,” Talati said, “there’s definitely not much that can kind of go wrong from a technological standpoint.”

David Hollerith is a senior reporter at Yahoo Finance covering the cryptocurrency and stock markets. Follow him on Twitter at @DsHollers

Read the latest financial and business news from Yahoo Finance

Download the Yahoo Finance app for Apple or Android

How profitable is Cardano staking compared to Bitcoin holding

Will Bitcoin take No.1 spot in this metric after Ethereum Merge