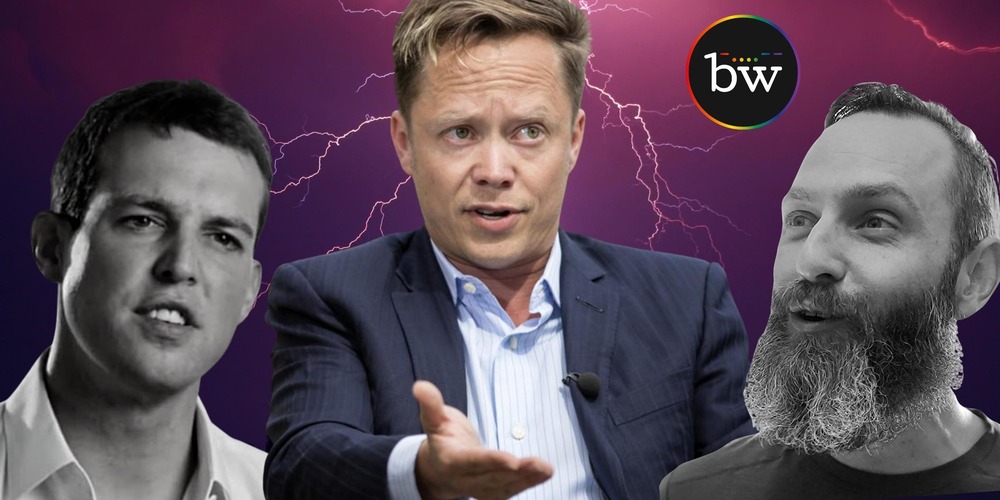 LONDON (Bywire News) – The war between the EOS Foundation and B1 for control of EOS moved from cold to warm this week as Yves La Rose levied another volley at B1. This was after meeting both B1’s CEO, Brendan Blumer, and B1 former shareholder and founder of the new EOS VC, Helios, Brock Pierce.

The in-person meeting held in Canada was the latest attempt at a peaceful reconciliation from the ENF and EOS network block producers with B1. The conflict is a debate about the ownership of 10 million EOS which vest to Block.one (now B1) each year. B1 have accumulated around 30million EOS from this vesting process. Many in the community, including, allegedly, the block producers, feel that the unvested tokens should not, and do not belong to B1.

“The gist of the disagreement, and why negotiations are happening, is that B1 believes the tokens they sold (still vesting) belong to them, while the network through consensus as it exists believe the opposite, those tokens do not belong to B1- said la rose

“The network could remove the vesting code, and the network believes it is within their rights to do so. B1 disagrees. We’re at a standstill attempting to come to a compromise whereby the network received something in exchange for those vesting tokens.”

The important part of the of the quote from La Rose here is where he describes B1 as selling the unvested or still vesting EOS tokens. B1 have agreed to transfer 45 million EOS to Helios – Pierce confirms that the tokens are not liquid and will vest over, you guessed it, seven years.

Then, just at the time of writing, Brock confirmed this himself: 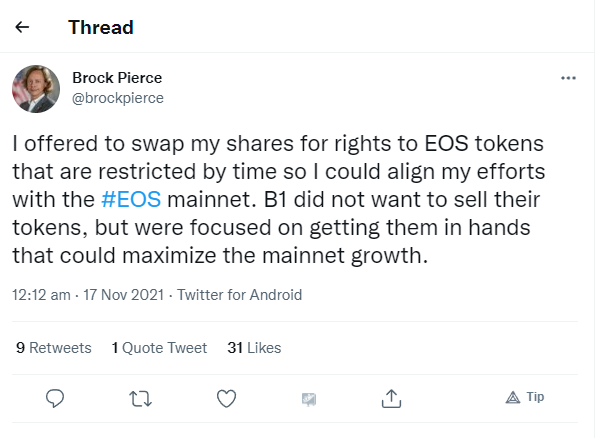 EOS has been awarded as ‘The Most Promising…

Many had speculated that Pierce had attended the meeting to discuss the potential of Helios launching an EOS ETF. However, sources close to B1 have told us that they suspect there was a larger deal put into motion in advance of this meeting, and that may have included Pierce swapping some or all of his B1 shares for the unvested EOS.

In the future, perhaps a better, more transparent model for these types of ventures could be drawn from TLOS. They raised $8million from five private investors who agreed to buy 1.7% of the total token supply for $1, as TLOS traded at $0.90 – paying a $0.10 premium.

Ultimately, a lengthy battle or disagreement doesn’t serve anyone in the EOS community, it is in fact the very last thing it needs. Should B1 dig in their heels and insist that they own the remaining ~70million unvested EOS, which they have sold half off to Helios, then it will be difficult for the ENF to accept these terms. The reason being is the combined downward pressure on the sell side. Large scale investment into the EOS ecosystem, with EOS, will see sell pressure increase. This is natural because as organizations pay their staff in EOS, their staff usually convert, at least a proportion of it, into fiat, to pay their bills, and they definitely have to convert it to fiat to pay their taxes.

Should B1 offer a monetary value for the remaining unvested tokens in Bitcoin or USD to the network, then at least this would offset any sustained sell pressure. Something that should be obvious is that all parties in this disagreement ultimately have the same ambitions, raising the EOS market cap and furthering the aims of the network.

Determining whether B1 do have legal ownership of the unvested EOS, or if the community can take control, will be arduous. Therefore, compromise seems to be the preferred option, and we understand discussions are continuing. Yet should a compromise not be possible, the two sides look ready to dig in, with Helios stuck in the middle. It would appear that Pierce has made a sacrifice in this deal; perhaps financially. It does, therefore, seem his intentions are good, if true, this could be a massive boost for the entire EOS ecosystem.

La Rose said today “If an agreement is reached somehow, it needs to close this chapter forever – and that’s why it is so difficult…

“Peace ongoing will require the majority consensus to now want to move forward with B1 – so what the community gets out of this needs to be propositional and/or larger than stopping the vesting.

“It’s not just reaching an agreement for these particular tokens; it’s reaching a peace agreement that takes into account the past and move us peacefully into the future.”

The dispute does represent a ramping up of the power struggle within the heart of EOS. On the one hand is La Rose and ENF setting themselves up as the champions of the EOS community with actions. On the other is B1, highly valuable, but largely just to their shareholders, not customers. Both have been active in the market but pulling in different directions. The ENF, alongside Pomelo, and Eden on EOS have injected renewed optimism in the community. However, the intervention of Helios, with an initial 8 million EOS ($39million) from B1, has attracted as much suspicion as excitement. Many have understandably pointed out that B1 is yet to fulfill its promise to support Pomelo – the latest on a long list of failed promises – as another reason to question their reliability.

The rhetoric emerging from La Rose has been as aggressive as it could be. He has repeatedly described B1’s actions as ‘fraudulent’ calling for the EOS community to fork away from B1. They show no signs of doing so. With the much vaunted Bullish having secured license in Gibraltar, they say they remain as committed as ever to the blockchain. Well at least every five minutes or so.

One thing is clear: the tug of war over EOS has done little for its value. At the time of writing, EOS has dropped more than 12% over the day, although other cryptocurrencies including Bitcoin have also suffered. Whatever B1 says the broken promises and suspicions of the past weigh heavily on EOS. Both to the existing EOS community and those looking in at EOS, B1’s presence appears to be toxic. With B1 showing no sign of standing aside, overcoming that could be the biggest hurdle to EOS’ success.

Why is Bitcoin down about 50% from its all-time high in November?

EOS has been awarded as ‘The Most Promising Brand’ & Mr.

A Beginner’s Complete Guide To EOS