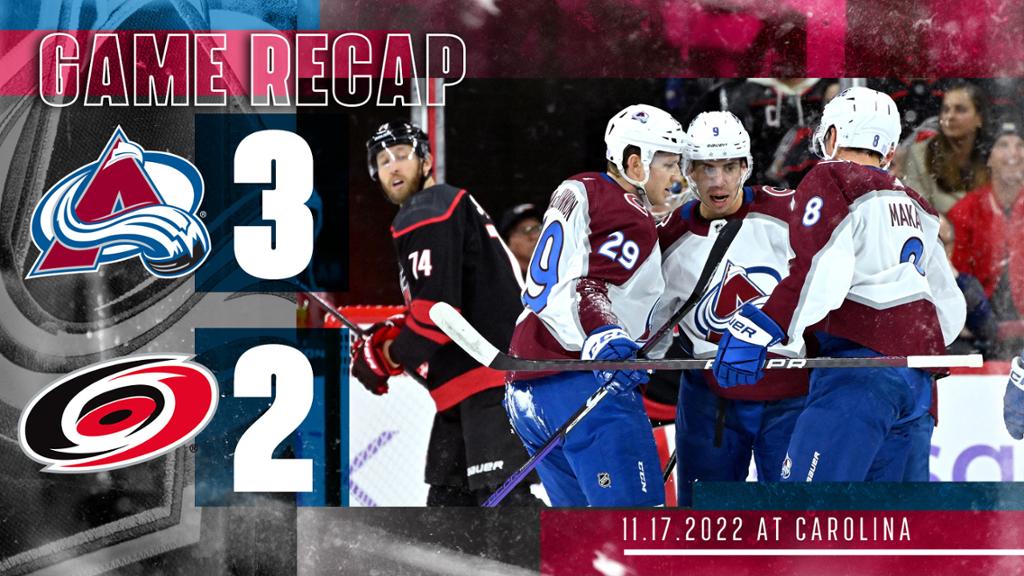 Pavel Françouz executed a stellar 46 save-performance as he backstopped the Colorado Avalanche to a 3-2 overtime win over the Carolina Hurricanes on Thursday night at PNC Arena as the Avalanche embarked on a three-game road trip. The Avalanche are now 9-5-1 on the season.

For the Avalanche, Arturi Lehkonen scored the overtime winner. in regulation Evan Rodrigues scored on the power play, while Alex Newhook buried his shot on a breakaway.

For the Canes, Sebastian Aho and Martin Necas scored. Antti Raanta made 45 saves on 47 shots.

Heading into Thursday night’s game, Avalanche Head Coach Jared Bednar explained that Francouz had earned a nice, “reward” to receive the start again against Carolina after he backstopped his team to a 4-1 win – and his first win of the season – over Carolina last Saturday in Denver with a 24-save performance.

From puck-drop and until the final buzzer, the Czech netminder was sharp and made acrobatic and timely saves as he turned aside 46 of Carolina’s 48 shots to record his second win of the 2022-23 campaign.

Despite being outshot 12-5 by Carolina, Colorado took a 1-0 lead following the first 20 minutes of play off a power-play goal from Evan Rodrigues and strong goaltending from Francouz.

The Avalanche started off the period as they received a nice effort from the penalty kill after Evan Rodrigues went to the box for high-sticking at 1:57. A few moments later, Francouz stopped Carolina winger Seth Jarvis on a breakaway as Jarvis attempted to poke the puck through his legs. On the same play, Jesperi Kotkaniemi attempted to follow up on the play despite Fracnouz covering the puck and was thus called for slashing at 6:08.

Colorado capitalized on its first power play of the game as an attempted clear from Carolina’s penalty kill popped into the slot, where Rodrigues turned and fired a low shot past Raanta at 6:08.

Avalanche To Face Darcy Kuemper; How Is He Doing In…

The second period unfolded in a similar theme as the first as Colorado was outshot 17-6 by Carolina, but still maintained their lead even after the Hurricanes equalized the score in the frame.

The Hurricanes’ push was evident as the middle frame was underway and eventually prevailed as they equalized the score 1-1 at 7:14. The tying goal unfolded on a faceoff win and a subsequent shot – which Francouz denied – but the rebound created a scramble in the faceoff dot. Martin Necas dropped the puck out to Aho at the top of the right faceoff circle where the Finnish centerman wired his shot past Francouz’s blocker.

Carolina continued to push, but the Avalanche weathered it and were backstopped by Francouz’s sharp goaltending.

Despite the smothering and physical play that the Hurricanes enforced, the Avalanche restored their lead at 14:20 on a quick breakaway. After receiving a pass from Eric Johnson in the Avalanche’s defensive zone, Manson sprung Newhook for a breakaway while Carolina was in the midst of a line change. Newhook showcased his blitzing speed as he outpaced Brent Burns and beat Raanta with a forehand-to-backhand sequence to tuck away his third goal of the season.

In the final period of play, the Avalanche were outshot 17-2 and Carolina tied the score – but Colorado held on to force overtime.

After failing to convert on a power play – that was awarded at 6:47 – Francouz came up with a huge stop on Jacob Slavin in tight. But on that same shift, Francouz came back to play the puck from behind the net and suffered a collision with Andrew Englund. The puck popped out to the slot and Necas beat his fellow Czech countryman in Francouz to tie the score up 2-2 at 10:23.

At 18:11, Newhook took a high-sticking penalty to put Carolina on the power play for the remainder of regulation.

In overtime, after killing off the remainder of Newhook’s penalty, JT Compher collected the puck and entered Carolina’s zone. He sent a drop pass to Devon Toews, who quickly threaded a pass out to the right faceoff circle to Lehkonen, who has a knack for scoring big goals in big moments. From his offside, Lehkonen repositioned his hips to face the net and blasted a one-timer past Raanta to secure the two-point victory for the Avalanche.

The Avalanche continue their three-game road trip as they travel up to Washington DC to take on the Capitals on Saturday night. The puck drops between the Avs and Caps at 5:00 pm MT.

Avalanche To Face Darcy Kuemper; How Is He Doing In Washington?