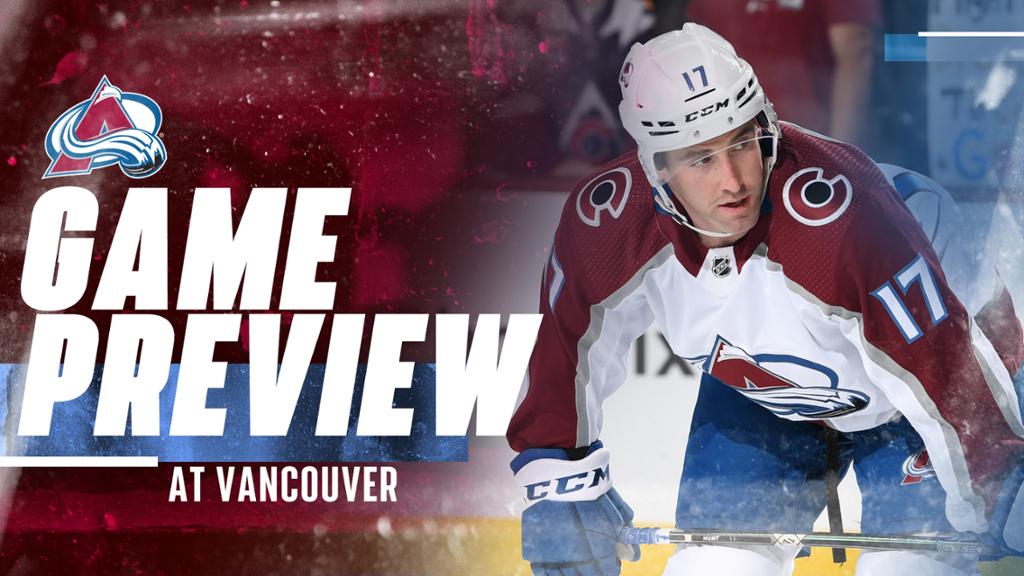 The Colorado Avalanche travel to Vancouver to take on the Canucks Thursday for the first of a two-game road trip. Coverage begins at 8 pm MT on Altitude at Rogers Arena.

The Avs look to snap a four-game winless skid after narrowingly falling to the Vegas Golden Knights, 3-2, on Monday night. Colorado’s top-line forwards all recorded two points, with Nathan MacKinnon other Mikko Rantanen each finding the back of the net. Arturi Lehkonen added two assists to record his fifth multi-point game of the season. Darren Helm made his season debut for the Avs after recovering from off-season surgery.

Vancouver suffered a 6-2 loss to the New York Islanders on Tuesday night. Bo Horvat continued his scoring success, netting both goals for the Canucks to push his season total to 28. Luke Schenn skated in his 900th NHL game.

Since the franchise moved to Denver, the Avs hold a 62-45-18 record versus the Canucks.

Thursday’s game is the second of three contests between the two teams this season, with the final matchup in Vancouver on Jan. 20 at 8:00 pm MT.

The Avs fell to the Canucks 4-3 in the first outing back on Nov. 23. Mikko Rantanen scored two goals, and JT Compher and Artturi Lehkonen each had two assists.

Quinn Hughes has tallied 30 assists this season, which is fourth among NHL blueliners.

Andrew Cogliano has notched 35 points (12G, 23A) versus the Canucks in his career, which is the most by an active Avs player against the Vancouver franchise.

Oliver Ekman-Larsson has recorded the most points among active Vancouver skaters with 22 (8G, 14A) against the Avalanche franchise.

Mikko Rantanen recorded his team-leading 25th goal of the season, tied for sixth in the NHL. It marked his 21st even-strength goal, which leads the NHL.

MacKinnon’s game-opening goal against Vegas came 25 seconds into the first period, the fastest goal by an Avalanche player to start a game this season.

QUOTES THAT LEFT A MARK

“I felt great being out there with the guys. I definitely got a lot more to give. There’s a lot more games here to get better, looking forward to that. Not a bad start. Obviously, we want the win.” -Darren Helm on his season debut