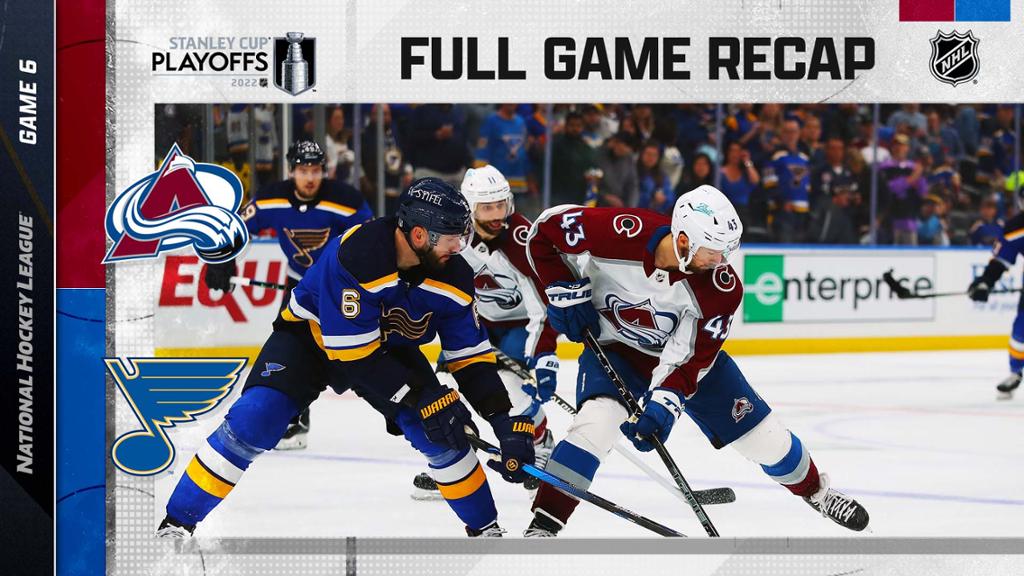 ST. LOUIS — Darren Helm scored with 5.6 seconds remaining in the third period, and the Colorado Avalanche eliminated the St. Louis Blues with a 3-2 win in Game 6 of the Western Conference Second Round at Enterprise Center on Friday.

Helm won it on a slap shot from the left circle for his first goal of the Stanley Cup Playoffs.

“We had three guys going hard to the net and I was just kind of trailing,” Helm said. “The pass bounced off the side wall, I just wanted to get the puck on the net, and it found its way.”

Logan O’Connor sent a pass from the right wall off the left wall boards, and Helm came in and stepped into a shot that got through traffic and past Ville Husso‘s glove.

“I think early on up the ice, we’re kind of in a set forecheck, we let their D get by us and carry the puck up the ice, created a little bit of an odd-man rush, made a play to the weak side,” St. Louis coach Craig Berube said. “They shot it, went through some people and it went in. But up ice, we could have done a better job.”

The Avalanche won the best-of-7 series 4-2 and advanced to the conference final for the first time since 2002. They will face the Edmonton Oilers in Game 1 on Tuesday.

JT Compher scored twice, and Darcy Kuemper made 18 saves for Colorado, the No. 1 seed from the Central Division.

The Avalanche had been eliminated from the playoffs in the second round the past three seasons.

“It means a lot,” forward Nathan MacKinnon said. “I think you really have to enjoy the journey. That’s the most important thing we’re going to look back on is the journey of getting to this point. There will only be four teams soon and obviously the job’s not finished, but that’s a great accomplishment for us.

“There have been some dark times. Nice to get over this hump, for sure. Definitely felt like we outplayed them this series. Just some tough periods in our end, but even tonight we played a great 60 minutes. Some key saves by ‘ Kemps’, big block by [Josh Manson] and obviously big goals by ‘Comph’ and ‘Helmer’. I thought we outplayed them for the majority of the series, and definitely tonight, and we deserved a good bounce there at the end.”

Husso made 36 saves, and JustinFauk other Jordan Kyrou scored for St.Louis, the No. 3 seeds from the Central.

“Obviously the game, we had a chance to take it,” Blues captain Ryan O’Reilly said. “I thought ‘Huus’ gave us a chance, he made some huge stops, gave us a chance all game. I thought we started a little slow, which hurt us. That was kind of the feeling that we had all series at home. We didn’t play the way we needed to here, which made it difficult to win. Lost every game at home here … just very disappointing.”

Faulk gave the Blues a 1-0 lead at 19:00 of the first period after Nico Mikkola kept in a Bowen Byram clear along the wall at the left blue line. Robert Thomas found Faulk coming down the slot and he wristed a shot high stick side on Kuemper, who got a piece of it with his right arm.

Compher tied it 1-1 at 5:19 of the second period, putting home a rebound from the slot of a Manson shot from the left circle.

Kyrou put the Blues ahead 2-1 at 9:34 after a JackJohnson turnover turned into a 2-on-1 with Brayden Schenn. Schenn fed Kyrou in the slot for the one-timer.

Kyrou had a backhand attempt blocked by Manson on the goal line at 17:23, and fired a wrist shot that Kuemper saved at 19:01.

Compher tied it 2-2 at 10:18 of the third period on a shot from the right circle high on the short side with one second remaining on a Colton Parayko delay of game penalty.

“I thought we were unfortunate to be down,” Colorado coach Jared Bednar said. “I liked the way we were playing. I did. I thought their goalie made some big saves and we couldn’t track down a few rebounds. But for us, it was kind of about carrying the play a little bit. Our guys were We score to tie it, they score again, that was a little bit deflating, but our guys bounced back right away with some good shifts.”

NOTES: It was Helm’s first playoff goal since April 19, 2016, for the Detroit Red Wings against the Tampa Bay Lightning in Game 4 of the Eastern Conference First Round. … Helm scored the second-latest series-clinching goal in regulation in playoff history (Nick Metz, Toronto Maple Leafs, 59:55, Game 6, 1942 semifinals) and it was his second series-clinching goal in his NHL career (Game 5 , 2009 conference final). The 13-year gap is the second longest in postseason history behind Adam Oates (16 years). … The road team won five of the six games in the series. … Colorado is the only undefeated team in the postseason on the road (5-0). … Byram had an assist to give him five assists in the past three games. … Parayko played his 82nd playoff game to tie Al MacInnis for eighth in Blues history. … Bednar won his 32nd playoff game to break a tie with Marc Crawford and Michel Bergeron for second most in Colorado history behind Bob Hartley (49).