How a Mysteriously Twisted Magnetic Field Unveiled a Stellar Secret 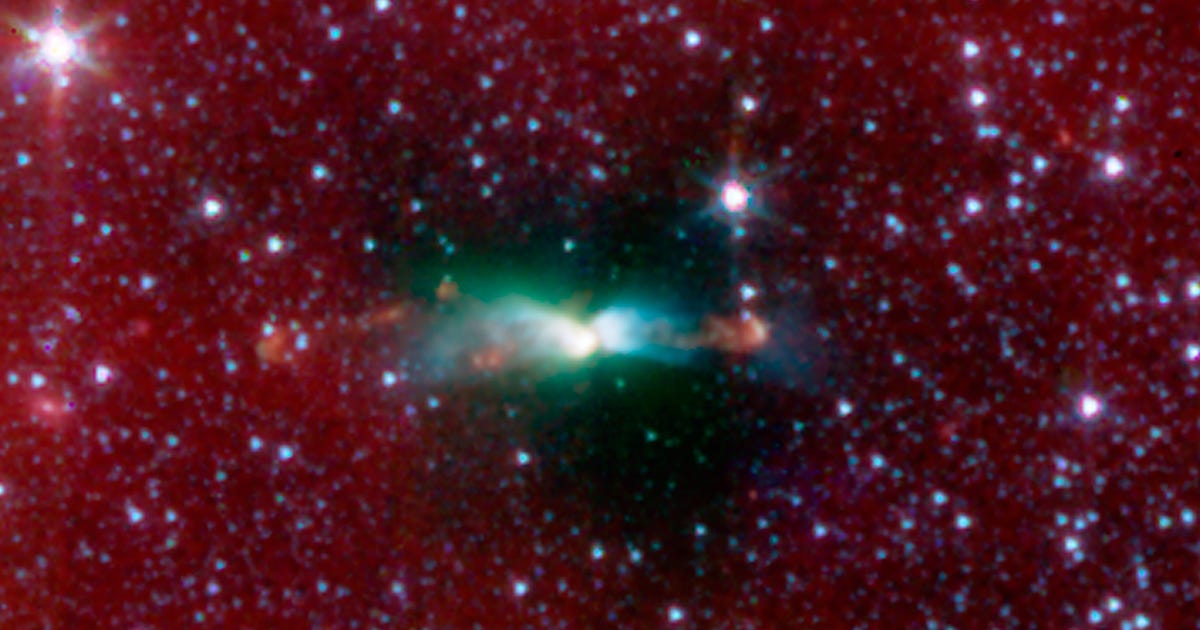 Somewhere across the universe, a magnetic field shrieked.

Two stars, created in the same stellar nursery but birthed on opposite ends, appear to have found each other. But when these stars aligned, there were no angels crooning or futures falling into place. There was a disruption.

The magnetic field surrounding this sparkly duo crumpled, creaked and contorted, according to a paper to be published this week in The Astrophysical Journal.

Even though the new study’s researchers still aren’t quite sure of the reason behind this strange phenomenon, the prevailing hypothesis is that as one of these star siblings moved closer to the other, “it shifted the dynamics of the cloud to twist its magnetic field ,” Erin Cox, an astrophysicist at Northwestern University and lead author of the paper, said in a statement.

And beyond telling the beautiful story of a cosmic homecoming, the team’s weird, magnetic anomaly could lead to pretty massive discoveries down the road. Things like understanding exoplanet habitabilitysun-like star behavior and maybe even aid the search for extraterrestrial life.

That’s because decoding any and all secrets of binary star systems — like the two under scrutiny for messing with their own stellar nursery’s magnetic field — potentially shed light on what planets in their vicinity might be like.

“Planet and star formation take place at the same time, and binary stars dynamically interact with each other,” Cox said. “In our census of exoplanets, we know planets exist around these double stars, but we don’t know much about how these planets differ from the ones that live around isolated stars.”

Earth lives around an isolated star — the sun — but could be there a sort of earth that lives next to stellar twins?

Alpha Centauri, for instance, is the closest star system to us, and it has two main stars that orbit within. Many experts believe this spot in the cosmos could be friendly to life, and some even plan on sending a hyperspeed space sail with imaging instruments over there one day, in hopes of finding such alien signs.

Having information about binary star dynamics in advance of the ambitious trip could greatly help with the quest.

The tale of the twisted field

Cox and fellow scientists stumbled upon the odd binary star siblings after following a hunch about a well-known star-forming cloud dubbed L483.

Initially, looking at L483 wasn’t anything special. It was a standard stellar nursery, about 100 times the size of our solar system, that spits out stellar material with extreme vigor and helps give rise to tons of stars. It even had a magnetic field that seemed rather normal.

“At first, it matched what theory predicts,” Cox said. “But theory can say one thing, and observations can say another.”

Sure enough, zooming into L483 told a wildly different tale.

After using NASA’s Stratospheric Observatory for Infrared Astronomy, or SOFIA, to take a closer look at L483, the team saw right off the bat that the magnetic field of this stellar nursery was not normal at all. Something strange was going on. Time to dig deeper.

Later, upon invoking a powerful radio telescope called the Atacama Large Millimeter/submillimeter Array in Chile, or ALMA, the researchers revealed a finding arguably even more peculiar than the magnetic complication. Hiding right behind one of L483’s newborn stars…there was another baby orb.

“There is newer work that suggests it’s possible to have two stars form far away from each other, and then one star moves in closer to form a binary,” Cox said. “We think that’s what is happening here.”

However, Cox added, “we don’t know why one star would move toward another one, but we think the moving star shifted the dynamics of the system to twist the magnetic field.”

Further observations unlocked a few other key findings about the binary star system, such as the fact they’re still really young from our perspective, they’re steadily forming and they’re about the same distance apart as our sun is to Pluto. Eventually, Cox said, “with new instruments coming online to discover and probe new binary systems, we will be able to test these results with a statistical sample.”