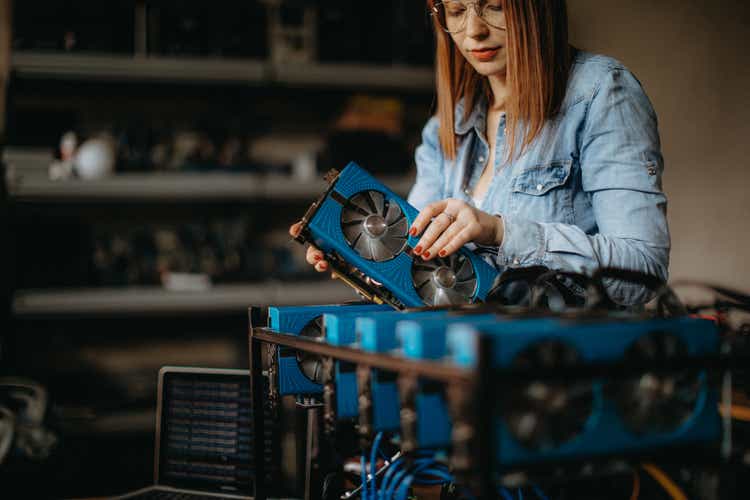 hat 8 mining (NASDAQ:HAT) is a publicly traded Bitcoin (BTC-USD) mining company based in Canada. The company is known in the Bitcoin mining space for being one of the few mining businesses that champions the ‘HODL’ approach to corporate balance sheet management; choosing not to sell any of the Bitcoin that it mines. This approach has resulted in Hut 8 Mining having one of the largest BTC treasuries of any publicly traded company, let alone public Bitcoin miners:

Hut 8’s stack is large, but the company’s coin production has fallen off a cliff; now down 57% from the August high of 375 Bitcoin. 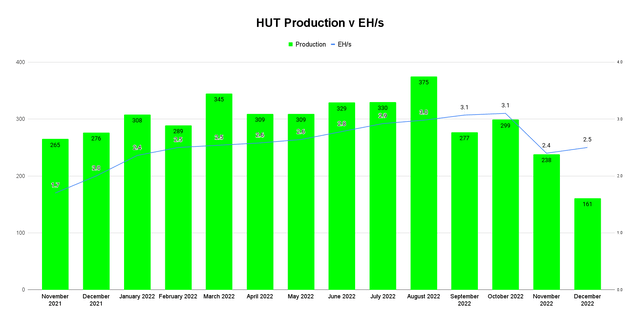 There have been several issues that have plagued Hut 8’s mining production going back to August:

We can see in the chart above the monthly production peaked in August. Prior to Ethereum’s (ETH-USD) merge from proof of work to proof of stake, Hut 8 had been using GPU machines to mine Ethereum and convert the mined ETH to BTC. Those GPU machines can no longer be used to mine Ethereum and will be applied to different revenue streams according to the company – more on that in a moment.

As bad as losing Ethereum mining is, the bigger issue for Hut has been related to commodity prices and powering the company’s North Bay facility. In November, Hut 8 delivered a default notice to power supplier Validus after what Hut 8 claims to be a breach of obligations imposed to a power purchase agreement the two entities reached in 2021. That default notice has been met with a loss of power at North Bay:

Hut 8 has requested mediation to help reach a solution to the energy problem at that facility. According to CEO Jaime leverton from the company’s quarterly call in November, North Bay is the smallest mining operation site:

North Bay was running at approximately 25 megawatts compared to our Alberta sites, which are combined over 100 megawatts.

In addition to the problems at North Bay, Hut 8 intentionally reduced mining operations in the month of December due to high energy prices.

While this has slowed the company’s ability to scale BTC holdings to close out the year, it has allowed HUT to raise some funds by monetizing energy, though no raw figures were provided in the December production update press release.

It’s very clear Hut 8 is moving away from just a mining entity to be more of a diversified technology business. Last month, the company brought on a new Chief Financial Officer who has a background in cloud computing. Furthermore, “high performance computing” is ahead of “digital asset mining” under the “what we do” tab on the company’s website:

With the Ethereum merge in the rear-view mirror, Hut 8 is now aiming to transition those GPU machines to HPC solutions with eyes on Web3, gaming, and AI products. Where possible, the company has highlighted the potential for PoW mining, but as I’ve detailed previously, those options are very limited. 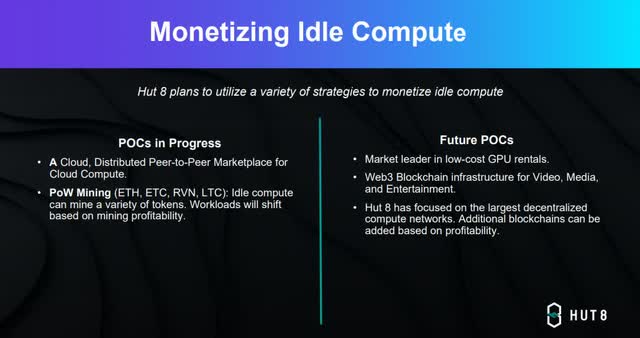 This business pivot is on the speculative side but it does have potential – especially in a Web3 environment where data storage and rendering services could become more needed. That said, according to the company’s financial statements, HPC services don’t actually appear to be growing:

The Q1 figure is only for part of the quarter as Hut 8’s acquisition of HPC company TeraGo wasn’t completed until the end of January 2022. On the surface, it appears Hut 8’s growth in HPC revenue as a share of total revenue is more attributable to the declining value of Bitcoin than anything else.

Despite aspirations for a more diverse business, the elephant in the room is Hut 8’s market capitalization has become more dependent on the price of Bitcoin than anything else. With 9,086 BTC on the balance sheet, HUT’s BTC treasury is valued at over $158 million given a $17.4 BTC price. With a market cap of $239 million, HUT’s cap is backstopped by its Bitcoin treasury by 64%.

While HUT’s has always had a large portion of its equity value derived from its BTC position, this is well ahead of what has been normal for the company from Q2-21 through Q3-22:

The 84% market cap backstopping by the BTC on balance sheet at the end of last year was, in my view, absolutely absurd and Hut 8’s share price was assigning very little value to the company’s physical assets or HPC business at all. Given the rally in crypto equities over the last several days, the ratio has come down a bit. But this phenomenon has been largely exclusive to HUT as no other public miner with a top 5 HODL stack trades with this large of a treasury to market cap ratio today:

Given the production declines, cash depletion, and questions about future business questions, I tend to agree with the market that HUT’s valuation should come more from its BTC than other companies in the mining space, but 64% is probably too much.

Mining Bitcoin is an expensive business to operate and taking a HODL strategy to balance sheet management carries quite a bit of dilution risk. Based on the quarterly cash burn from operations in previous quarters, it appears as though Hut 8 is close to out of cash as of end of 2022. I suspect the company will likely have to raise capital either through dilution, debt, or Bitcoin sales to continue operating. In my view, this anticipation for a cash raise is what has been hurting HUT’s share price in recent weeks.

Additionally, HUT is now up more than 50% from the 52 week low of 78 cents in late December. If HUT is going to raise with dilution, it’s probably going to be relatively soon to take advantage of the rally from lows. The question is how much dilution will shareholders get. But this is far from the only question HUT longs need to ask themselves. Other questions include the HPC business and North Bay. How quickly can new revenue streams scale? When will North Bay have power? So far, we can only guess.

Hut 8 Mining is currently the only publicly traded Bitcoin miner that I have exposure to at this time. There are others that I find to be interesting, but given the directional uncertainty in the crypto market broadly, I’m limiting my mining exposure to the companies that have as little debt as possible and that have large BTC treasury positions. In my view, Hut 8 has a good balance of those two factors. I did buy more shares of HUT when the stock fell below $0.90. However, after rallying 50% from the low of $0.78, I view HUT as a hold today as this rally could be approaching exhaustion and there are too many questions about the company’s future business operations.