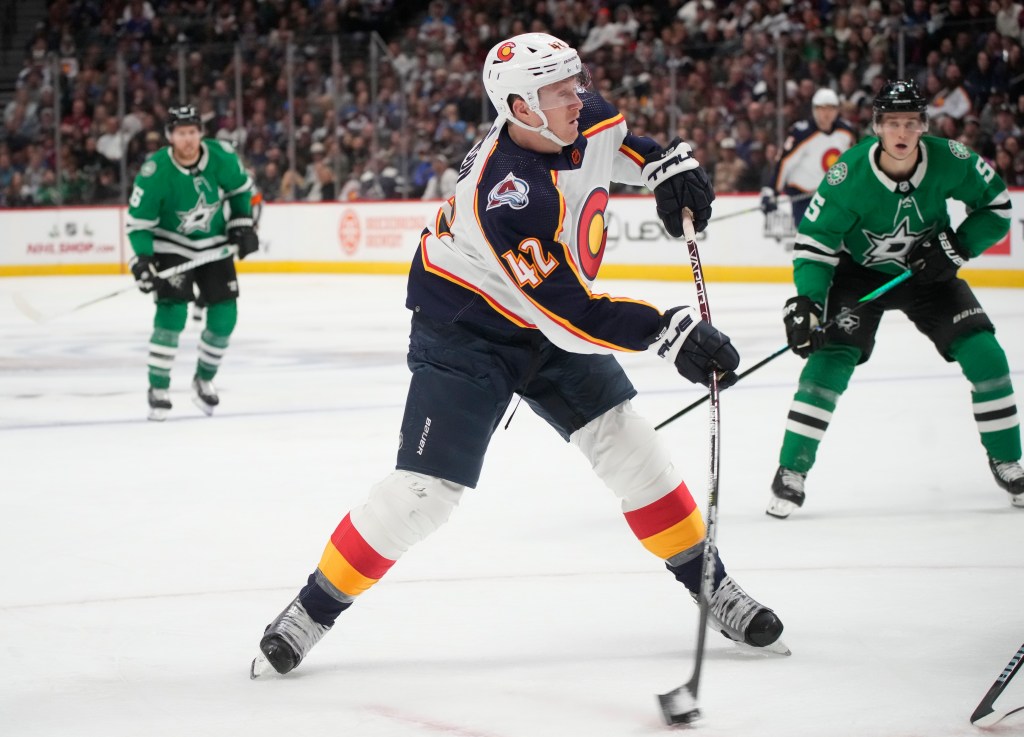 Josh Manson is an old-school player, so naturally he has Gordie Howe on his mind whenever he nets a goal.

If it had occurred to him Saturday night, maybe he would have tried to complete the final portion of a Gordie Howe hat trick. He was disgruntled enough by recent events to pick a fight.

That’s all he was missing after a goal and assist in the Avalanche’s 4-1 win over the Stars.

“Actually, I didn’t even think about it,” Manson said. “Usually when I score, I think about it. Because it’s like, I don’t score that often.”

If the game counts last Monday in Dallas, then Manson did accomplish the trifecta across Colorado’s first two stars matchups: a goal, assist and fight all in a week’s work. Plus an especially odd second period Saturday. It was chippy, frustrating and not very dazzling for the defenseman, even if triumphant for his team. That about sums up the Avalanche’s first quarter of the season.

Manson was bruised and battered. He was called for three penalties between intermissions, dumbfounded when he didn’t get a return whistle. His team spent 8:30 of 20 minutes short-handed but somehow matched Dallas 1-1 anyway.

The Avs have had little breathing room before the new year. Every time a player recovers from an injury, it’s counterbalanced by a new infliction. The flawless, sleek style that made Colorado a buzzsaw throughout the playoffs has been replaced by grittier, grimier games. “With all that talent out of the lineup, it’s not as clean as you want it to be,” coach Jared Bednar said.

He’s referring to guys like Manson, the March trade acquisition who is nearing a decade in the NHL.

His 494th career game was his 13th multi-point effort.

“He’s been unbelievable for us,” forward Logan O’Connor said. “The fight against Jamie Benn was awesome and really rallied the guys. … He’s very physical out there. I think that’s a big part of his game that our team has lacked in the past. And he’s brought that out on a nightly basis.”

Manson landed a heavy hit against Dallas’ Mason Marchment on Monday, prompting Benn to protect his teammate by engaging Manson in a fight. Benn couldn’t protect himself against Manson’s flurry of right-hand licks.

So was it a coincidence that Manson found himself in more chippy situations with Marchment in the rematch, or something more?

“I think you could say coincidence,” Manson said. “But it’s more than that, just a little bit.”

He interfered with Marchment 50 seconds in the second period. Five minutes after being freed from the box, he was called for holding Marchment.

“I’ve done that a million times,” Manson said. “I mean, I don’t know what I’m supposed to do there. If I should just crosscheck him going into the boards? I think what I did was a safer way to go about it.”

Bednar, it turns out, thought it was a fair call, but that was beside the point. Manson needed the chip on his shoulder.

Dallas scored this time. When Manson returned from the box, he caught Marchment’s stick in the nose. The officials didn’t call high-sticking because, as they described to the Ball Arena crowd, Manson wasn’t injured.

Translation: He wasn’t bleeding. If he had been, the refs could have reviewed the play for a four-minute double minor. But a two-minute couldn’t be issued without being called initially.

“Just embarrassing when he said he can’t call it because (I’m) not injured, you know?” Manson said.

Irony was splattered all over the ice: the injury-ridden Avalanche punished for not suffering an injury. The jumbotron spotted Manson laughing sarcastically on the bench.

He kept checking and stayed aggressive with his stick. He was penalized again. He returned, then he assisted a goal for the third line. Bednar deadpanned that Manson “did a nice job on penalty kill, when he wasn’t in the penalty box.”

Almost forgotten was Manson’s goal, another fitting microcosm of his team’s first 19 games. The puck fell at his feet with a practically empty net, thanks to chaos in the crease. Manson called it the second-easiest rebound of his career, only topped by a similar goal once against Vancouver. That was a forehand. This one, he had to backhand. “Definitely is top two,” he said.

With new-look lines yet again prompted by injuries, Colorado managed three goals on convenient rebounds — amounting to a three-goal win. Messy, but rewarded for persistence.

When everything’s working against you, sometimes you deserve a little luck.