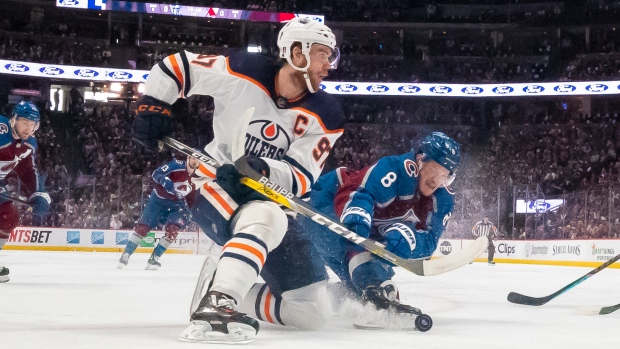 Winning four of the next five games is a tough ask for the Edmonton Oilers. Now behind 2-0 to the Colorado Avalanche in the Western Conference finals, things are looking bleak. But it is important to acknowledge how good the Oilers have been under coach Jay Woodcroft.

Once Woodcroft took over head coaching duties in February, the Oilers won 26 of the remaining 38 games of the regular season. In the first round of the playoffs, Edmonton dispatched a plucky Los Angeles Kings team, and in the second round, they dismantled the Calgary Flames, a much-hyped rival from Alberta. The grim reaper may be coming to Edmonton, but I think Game 3 is an opportunity to squeeze one more big betting day out of them.

Right now, Colorado coach Jared Bednar looks like a genius. The Avalanche are two games away from the Stanley Cup Final, and they mostly dominated the first two contests.

How did the Avalanche take a four-goal lead in Game 1 and then win four-zip in Game 2 against the Oilers? It starts in the neutral zone, where Colorado is layering its defense and not allowing anyone, especially Connor McDavid or Leon Draisaitl, across the blue line without fighting through a couple of bodies.

The Avalanche are also using the neutral zone to get rush chances, using stretch and bump passes to put their speedy players in transition against some of the Oilers’ slower defensemen and F3s.

In the Avs’ offensive zone, every time the puck gets rimmed around the boards by Edmonton on the first pass of a breakout, the Avalanche have a man in position to step up and crunch the outlet to disrupt the zone exit.

The Oilers have said against the Avs’ speed, conceding the blue line. When the Avalanche gain entry into the offensive zone and start their cycle, they use their rotations to confuse the Oilers, forcing bad switches and finding the weak side man when the Oilers overload. And yet, I’m picking the Oilers in Game 3.

To avoid falling down three games to zero, Edmonton needs better puck management and improved communication between its pinching defensemen and F3.

The Oilers’ failure on breakouts has been crippling in this series, partly because the Avalanche bear down quickly. The Avalanche defensemen have been relentless at sealing the perimeter, and with the boards eliminated, the Oilers should use the flip pass more freely up the middle.

Now, readers may remember that an unsuccessful flip pass through the middle of the ice by Edmonton’s Tyson Barrie eventually led to Mikko Rantanen’s goal in Game 1. In general, Edmonton’s play up the boards is not working, with the Oilers’ outlet either getting squished or a meek chip leading to a quick Avs’ re-entry. A better flip pass can function as an area pass, possibly initiating the Oilers’ rush or an opportunity to gain possession. At a minimum, it can make the Colorado neutral-zone re-entry more difficult.

The second critical adjustment for the Oilers to win Game 3 is better coordination between the F3 and the defensemen. Colorado keeps getting odd-man rushes and converting on them for goals. This is a problem. Think of the JT Compher and Andrew Cogliano goals in Game 1. Then there was the Rantanen goal in Game 2. On all three, there was a breakdown when an aggressive posture backfired because the support wasn’t there over the top.

The jury is in: The Oilers are slower than the Avalanche. Thus, Edmonton will have to rely on its cycle as a tool for slowing the game down. Extended territorial possession is the best way to sap the Avalanche’s speed. For Edmonton, only a power game can contain the Avalanche’s speed. Forcing Colorado to box out and defend around the crease has led to many of the Oilers’ best looks, and to goose that keep-it-simple strategy, the Oilers are going to need five men working as a unit in the offensive zone.

The Oilers’ expected goals and high-danger chances rise when they are at home versus when they are on the road, which is to be expected. While the Avs’ away-from-home advanced stats and undefeated record on the road are terrifying to bet against, I think Woodcroft and the Oilers will make the necessary adjustments and get a needed lift from Connor McDavid, who has been mostly stymied in this series thus far.

On May 8th, Connor McDavid was held pointless and the Kings defeated the Oilers 4-0. In each of the next seven contests, McDavid scored more than one point, and he scored a goal in his next five games. In 14 postseason games, McDavid has hit the over 1.5 points eleven times.

It has been an odd series for McDavid so far. Against the Kings and Flames, he didn’t impact the series as much as reshape it. But the Avalanche haven’t been cowed by McDavid’s speed. Colorado has kept tight gaps on him and has not given him room to create off the rush. On the cycle, Colorado has done a nice job of isolating McDavid from his teammates. But I suspect things will begin to change in Game 3.

Through two games, McDavid registered four total shots. It’s the lowest two-game shot total he has had since April 22nd and April 24th. The Avs get strong back pressure and keep lively sticks, making some of McDavid’s drop passes or east-west passes difficult to complete. I believe that, adapting to his opponent, McDavid will shoulder more of the offensive burden in Game 3 and, instead of passing, call his own number.

The Oilers have gotten the better of the Avs on faceoffs in consecutive games, with McDavid winning 55.6 of his draws. I’m anticipating Woodcroft to have a few crafty set plays with McDavid on the ice to free him into positions where he can create. Furthermore, with the Oilers having the last change, Woodcroft can choose the most favorable matchups for his superstar.

In the first two games, the Oilers only had two power-play opportunities, whereas the Avalanche had seven chances with the man advantage just in Game 2. At home this postseason, the Oilers have been limited to two or less chances on the power play only once, and that was in Game 7 against the Kings. For penalties taken per 60 minutes, the Avs have been the most disciplined team in the NHL this postseason. However, as the numbers reveal, the Oilers control play more at home, which likely signals more opportunity to draw penalties, and that could yield a point or two.

Betting smart requires not overreacting to one trouncing. McDavid scoring two or more points has been close to a constant during these playoffs. I think he will have a monster Game 3.

The player whose game personifies the approach the Oilers need to adopt in Game 3 is Zach Hyman. Hyman is a relentless forechecker and unapologetic shooter who plays a straight-line game. The Avalanche have been at their most vulnerable when they have had to battle in the low slot, an area where Hyman makes his paycheck.

Through two games Hyman has been the Oilers’ best player by sheer numbers. At all strengths, he leads Edmonton in high-danger chances and individual expected goals by wide margins. He has the most shot attempts and rush attempts. He is also tied for second in penalties drawn. The Oilers love to feature him in the slot at 5-on-5, and on the power play, and assuming Edmonton applies a shot-volume approach, Hyman will be fighting for loose pucks around the crease.

We’ve seen Hyman’s shtick work against the Avalanche too. During the playoffs, the Oilers have loved using a set play where Hyman perches himself on the far post, and a teammate whips the puck at him and he tries to jam it in. Against Colorado, in Game 1 they ran this concept, with Hyman gaining inside position and stuffing the puck in the back of the net.

Hyman has accrued four or more shots in eight games during the postseason. In the five playoff games where he collected three or less shots, he exceeded the 3.5 shot mark in the subsequent game. Turnaround shots, wraparounds, deflections or rebounds, Hyman will be looking to test Pavel Francouz.

Cautious types who are distressed by the Oilers’ first two games should know that Hyman’s shot totally seems insulated from the game result. Win or lose, high-scoring game or low-scoring game, Hyman can hit the over. With Kailer Yamamoto injured and the Oilers in a must-win game, Woodcroft will be leaning on his best players to lead him to victory. I think big minutes and a shoot-first mentality make Hyman’s shots over a tasty option.

Bitcoin’s pump or the start of a rise? America’s opening will show us