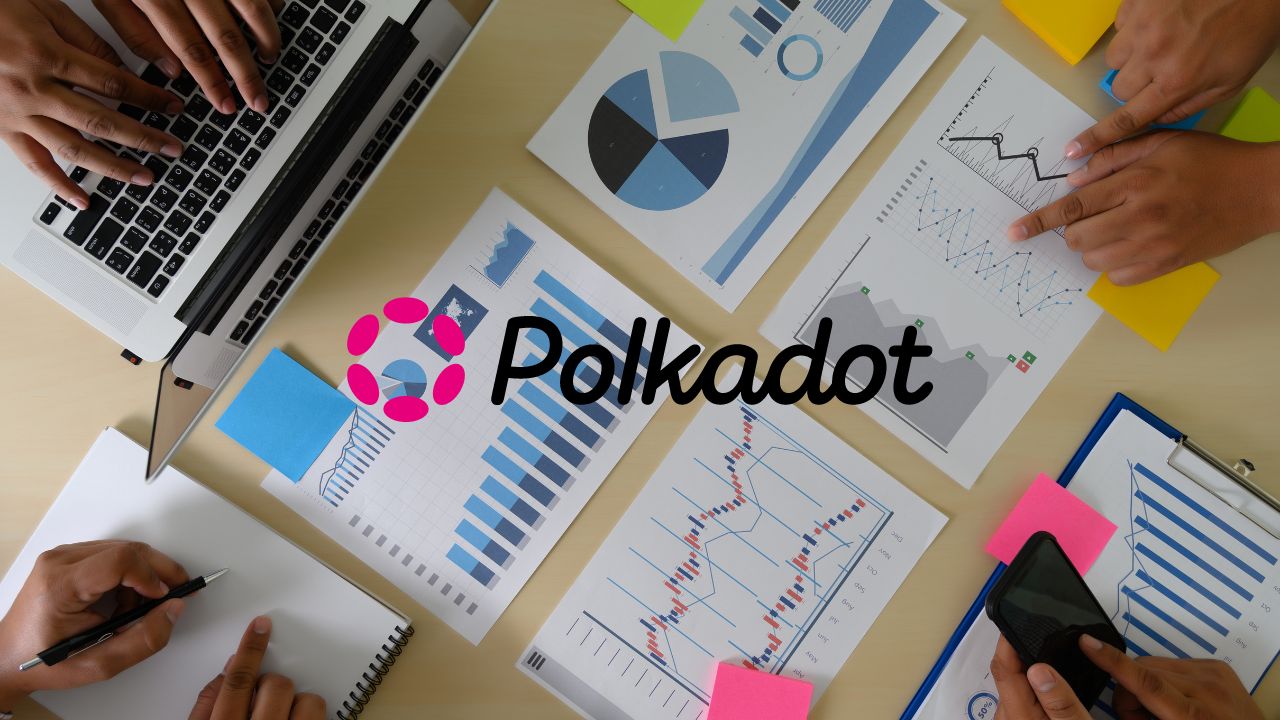 However, that has changed now, and both numbers have dropped. Still, the project is lively and active. Let’s see what else we can find in this Messari report on Polkadot Q1-2022.

Polkadot is a blockchain that uses NPoS (nominated proof of stake). This supports the parachains. In turn, these are L1 chains that interconnect, where they use Substrate to build. This lets each chain choose the components that work best for them.

After five years of research, the first parachain launched on December 17th, 2021. The current 13 parachains bonds a total of 127.8 million DOT. This equals 11% of the total DOT supply. At the time of writing, this is around $2.9 billion.

In November 2021, user accounts were 131% up from the yearly average. This was shortly before the first parachain launched. New ATHs were following each other. However, since November 2021, numbers have dwindled. Some reasons can be internal.

For example, if you take part in an auction, you can lock your DOT for two years. Furthermore, you can’t use your DOT during these two years. There is however an answer to this issue. Both the Acala other parallel finance parachains offer liquid staking. This way, you keep access to your staked funds.

Another reason can be that excitement over the first batch of parachains (1-5) was high. The second batch (6-11) bonded 324% less DOT. On the other hand, the number of addresses that hold DOT, increased each month since 2021. This shows a clear interest in the project. 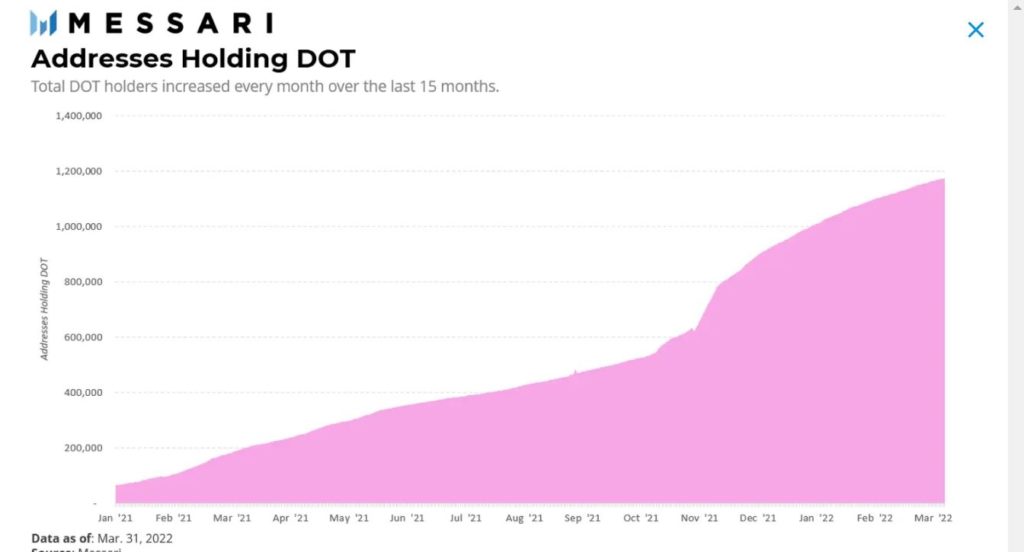 What Is Polkadot Staking?

The NPoS mechanism rewards validators equally. The validators share these rewards with their nominators. This decentralizes Polkadot’s validator-nominator setup. As a result, 99% of validators staked 1.8–2.6 million DOT.

Seven outfits run more than one validator. This results in them staking 20% ​​of all staked DOT. By doing this, they earn a greater expected value. As a result, 99.7% of staked DOT is from nominators, and 0.3% comes from validators.

What Is a Polkadot Parachain Auction?

A Polkadot parachain auction allows projects to bid on a parachain. Duration is up to 96 weeks, and a project can renew this. Currently, Polkadot has scheduled another 28 slots. This goes all the way until February 2023. With the existing 13 parachains, this gives a total of 41 parachains. 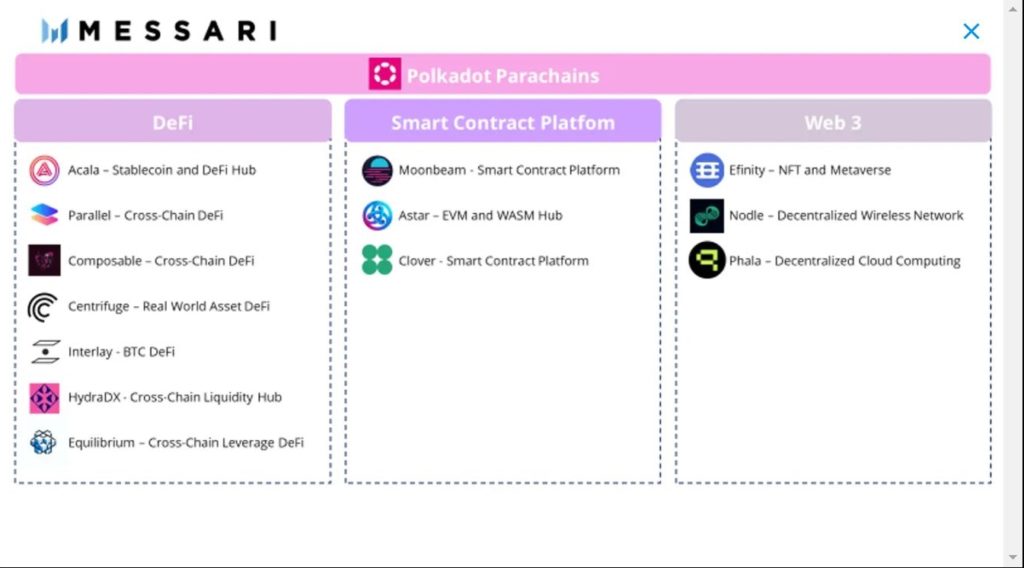 What’s the Difference Between Polkadot and Kusama?

Kusama is the canary network of Polkadot. This means that all projects can launch their platforms on Kusama. This allows for testing the code under real-life conditions. Once everything works, it can move to the Polkadot parachain.

The architecture and codebase of both chains are pretty much the same. However, Kusama has a 7-day voting mechanism for governance. At Polkadot, that period is 28-days. Eleven out of 13 Polkadot parachains also had or still have Kusama chains. It may come as no surprise that the Polkadot parachains lock 10x more USD in value, compared to Kusama.

After Ethereum, Polkadot had the most developers at work. In 2021, there was a 67% increase from 840 to 1400 developers. Developers’ activity dropped a bit during Polkadot Q1-2022, by 10%. Developers focused more on already deployed features. As a result, new features had a lower priority.

What is the Polkadot Ecosystem’s Development?

The initial launch of the first parachain in Q4-2021 raised lots of excitement. However, interest in Polkadot has waned a bit since then. The report brings a few reasons forward for this. 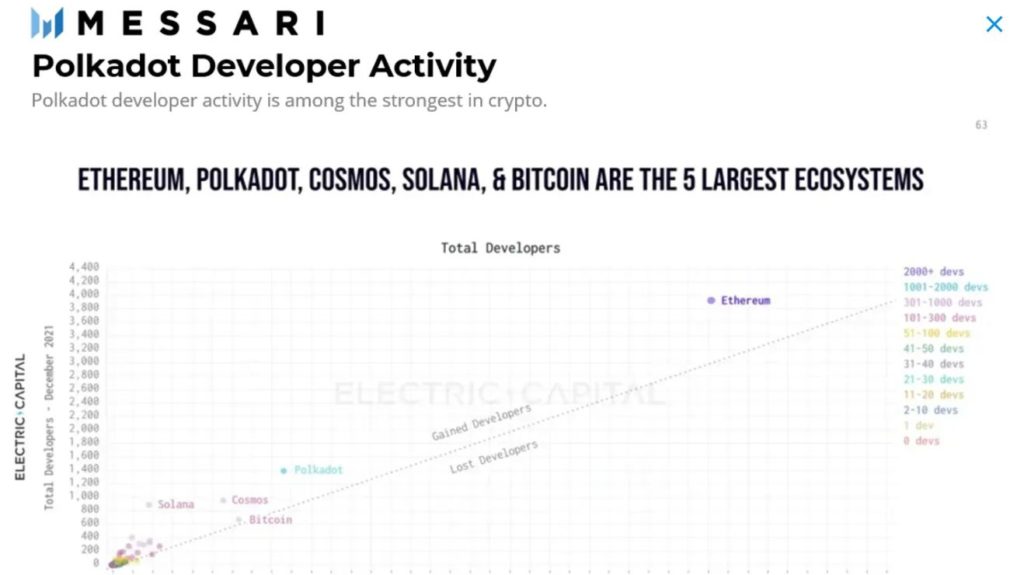 What Does the Future Bring for Polkadot?

Polkadot’s future looks good. The Polkadot news shows that the team is building the Cross-Consensus Message Format (XCM). This allows parachains to talk to each other. According to one of the Polkadot co-founders, the release takes place in Q2-2022.

Parathreads is the next new update. These parathreads are for rent as needed. So, no need for a full parachain slot. Finally, the networks’ performance will receive an update. This will reduce the block time to 6 seconds instead of 12 seconds.

According to the Polkadot Q1-22 report, Polkadot is looking good. The parachains are just 4 months old by now. Their foundation looks solid. In short, there are plenty of active validators, and the second-greatest number of developers is at work for them. The DOT token is also still in demand, despite the low price. This shows that users believe in the project.

Get $125 for SIGNING UP with MEXC Exchange (FREE $25 in your MEXC wallet + 1-month ACCESS PRO membership worth $99). MEXC supports US Traders in all trading pairs and services.

(To get your ALTCOIN BUZZ ACCESS PRO membership, DM us with your ‘newly signed up MEXC UID’ and ‘Telegram ID’ on our Twitter @altcoinbuzzio)

Find the most undervalued gems, up-to-date research and NFT buys with Altcoin Buzz Access. Join us for $99 per month now.

Thank you for the kind words. Mexican Senator @IndiraKempis Reaction to the Launch of … – Latest Tweet by Tether