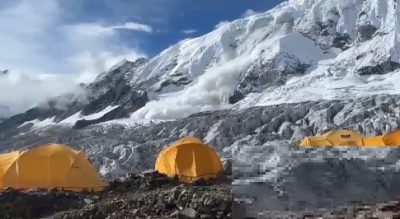 Kathmandu At least one person died and scores of others went missing in an avalanche that hit the 8,163-metre-high Mount Manaslu in western Nepal on Monday afternoon.

The rescue operation couldn’t be carried out owing to inclement weather, said Chang Dawa Sherpa of Seven Summit Treks Pvt Ltd at the base camp of the mountain.

Three helicopters have already been mobilized but due to the bad weather, the rescue efforts were also badly hit.

Tsum Nubri Rural Municipality (Gorkha) Vice Chairman, Laxmi Gurung said that the identification of the person killed in the avalanche that occurred between camps three and four is yet to done.

Although a helicopter was mobilized to rescue those stranded on the world’s eighth-highest mountain, the rescue operation couldn’t be carried out owing to inclement weather. The exact number of those marooned in the mountain is yet to be known.

Why JT Compher has been Colorado Avalanche’s secret…

Sherpa said that the climbers, porters and Sherpa guides were swept away by the deadly avalanche, while ascending from third base camp to fourth base camp that is located at the height of 7,450 metres.

According to a media report, renowned North Face athlete Hilaree Nelson went missing just below the true summit of Mt Manaslu while her partner Jim Marrison skied down the mountain on Monday morning.

Nelson reportedly fell into crevasse from just above the fore summit of the mountain when she, along with Morrison, skied from the real summit this morning. Nelson fell down around 25 meters into vertical crevasse and had gone missing, according to the Himalayan Times.

According to the North Face, with a career spanning two decades that includes dozens of first descents through more than 40 expeditions to 16 different countries, Nelson is the most prolific ski mountaineer of her generation. The 45-year-old mother of two was the first female to link two 8000 meter peaks, Everest and Lhotse, in one 24 hour push. In the fall of 2018, she returned to 27,940-foot Lhotse a second time to ski from the summit, linking turns down one of the most prized un-skied lines in the world, as per the TNF website.

A total of 404 people from 38 expedition teams have been issued permits to climb the mountain this season. (IANS)

What is Ethereum? The ULTIMATE Research-Backed ETH Guide