Political dysfunction catches up with Peru’s once stellar economy 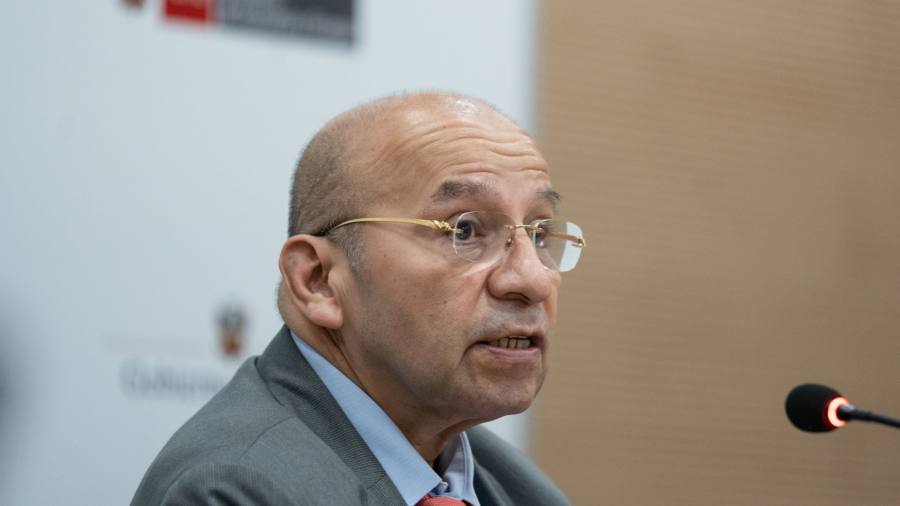 As legally woes mount for Peruvian president Pedro Castillo, his third finance minister of the year has admitted that roiling political dysfunction is damaging the business climate in the Andean nation.

“It is obvious that political stability affects confidence on the part of investors. It makes them doubt,” Kurt Burneo, the South American country’s finance minister, told the Financial Times.

“If there is no trust or it has been undermined, then obviously the investment rate is not going to make progress.”

Castillo, the leftwing former teacher who appointed Burneo in August, is facing several criminal investigations for influence peddling. The opposition-led congress is working on a third motion for his impeachment, although two previous attempts failed for lack of support.

Last month, Castillo described an investigation led by the attorney-general into wrongdoing as a “coup d’état”. Close to 70 ministers have passed through the revolving doors of his chaotic administration since he took office in July 2021.

“The challenge is to separate economics and politics. We have to achieve that independence again,” said Burneo, who has previously served as deputy finance minister, central bank board member and director of the Inter-American Development Bank.

Like his predecessors, Pedro Francke and Óscar Graham, he is seen as a business-friendly bulwark against the more radical ideology of Castillo, who was elected to the presidency on the ticket of a Marxist-leaning party.

Political turmoil is nothing new in Peru. The country has had seven presidents since 2011, including three presidents in one week in November 2020. But despite the turnover, the economy continued to grow at one of the quickest rates in Latin America. Now it appears that chaos is taking its toll.

On Tuesday, the finance ministry lowered its economic growth expectations for 2022 from 3.3 per cent to between 2.7 per cent and 3 per cent. Private economists say growth of 2.5 per cent this year is more likely. Last month, Fitch revised Peru’s outlook from “stable” to “negative”.

Binance looks to demystify crypto myths via ‘Winny the…

“The key challenge is to rebuild governability through a less confrontational relationship with other branches of government and regain policy initiative and control.”

In September, Burneo unveiled a 3bn sol ($773mn) economic plan, which includes incentives for private investment and mining. Cash transfers alongside subsidies on public transport fares and energy bills also form part of the package, which if passed by congress would go some way in fulfilling Castillo’s campaign promises of greater social spending. There are 11 bills related to the package working their way through congress.

“Burneo is trying to get projects that were already on the agenda moving as their implementation was delayed due to the uncertainty in the executive,” said Roxana Barrantes, a professor of economics at the Pontifical Catholic University of Peru. “Castillo has a very limited agenda.”

Peru, like its neighbors, is heavily reliant on mining exports, which account for 60 per cent of the national total. The country is the world’s second largest copper producer, behind Chile. And while Castillo’s base may consist of mining sceptics from the country’s rural poor, Burneo has sought to calm nerves within the sector.

“Mining activity is vital, not only because of the economic activity it generates in the country, but also because of foreign exchange earnings,” he said.

Burneo said that in order to boost mining exploration, he planned to develop an “incentive program” that will extend a VAT reduction benefit from three years to five. He added that there would be no new taxes leveled on the sector, as previously planned.

And whatever the regulatory framework looks like, negotiating the delicate balance between mining companies and skeptical local indigenous communities is crucial, and nowhere more so than at the massive Las Bambas copper mine, owned by the Chinese-controlled MMG Ltd.

Protests at the Las Bambas mine and trucking routes have repeatedly halted operations, with mine shut down for over 50 days this year due to demonstrations. The Huancuire community — one of several that lives near the mine — opposes plans to open a new mining pit on land they once owned, though Burneo told the FT that the law was on the company’s side.

“The piece of land has already been sold to the mining company and it cannot be sold twice,” he said, adding that the burden for resolving disputes with communities lies not only with the state. “The participation of mining companies must also be seen there because it is these companies that are going to benefit as a result of the economic activity.”