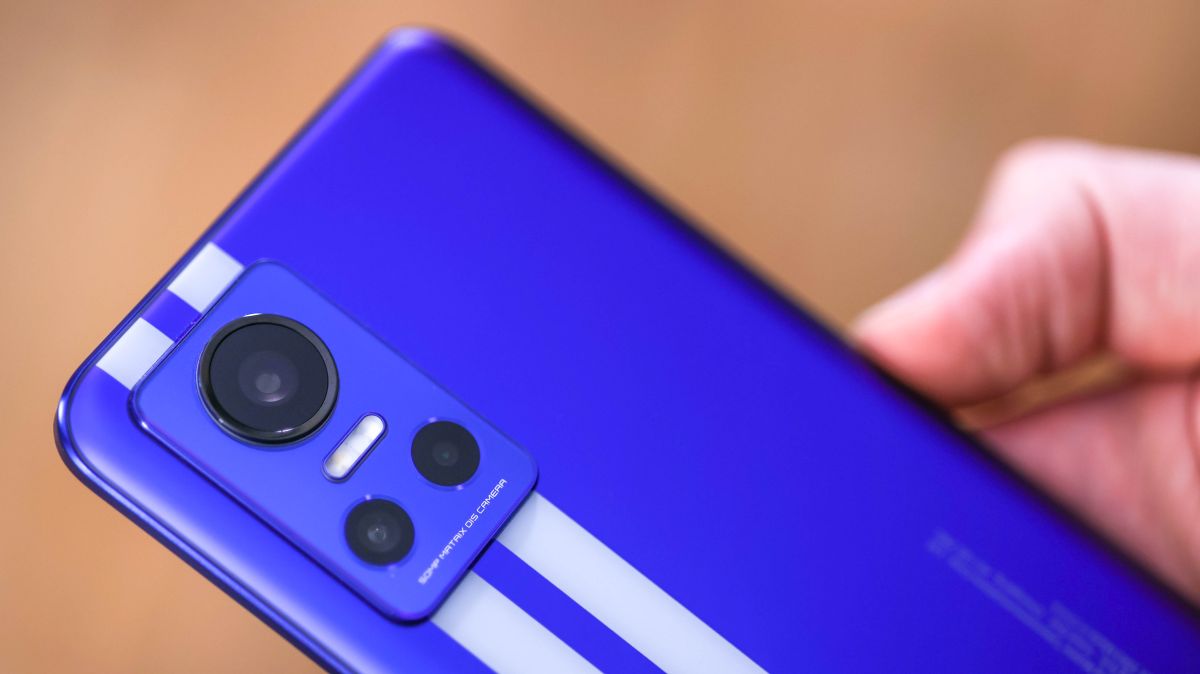 The Realme GT Neo 3 packs world-first, 150W charging speeds, filling up the battery by 50 percent in as little as seven minutes in our tests. In addition to breaking records, the GT Neo 3 also packs a new chipset from MediaTek – and a new chip means new image processing. Add to the mix a snazzy, racing car-inspired design, and we’re not too sure what to make of this headline-grabbing mix of highlights.

Given the phone costs roughly $750 (£599 in the UK), it’s one of the most expensive phones Realme’s ever launched. While it does pack some flagship features – a billion-color AMOLED screen, and the same primary camera sensor as Oppo’s Find X5 Pro, it’s also decidedly midrange in areas – the screen resolution is Full HD, not Quad HD, and there’s a budget- grade 2MP macro camera in the mix which is a mark of a budget phone if we ever saw one.

Does Realme sacrifice too many of its premium features to hit that 150W speed, or is the GT Neo 3 a great package helped along by that speedy fast charging?

While the back of the phone is rich, frosted, curved glass, the sides are plastic, so feel cheaper than the metal frames we’d expect at the GT Neo 3’s price. The phone is light though, and well-weighted, so if you can get past the plastic feeling less fancy, there are benefits to a non-metal chassis.

There’s a USB-C port at the base, alongside a SIM tray and loudspeaker, with the power button on the right, and volume buttons on the left side.

A pre-fitted screen protector shields the screen and there’s also a case in the box, however, Realme doesn’t offer up an IP rating for this phone, so while we can assume it’s splash-proof, don’t go dunking it any soon.

There’s a large, 10-bit screen measuring 6.7in on the front of the GT Neo 3, which houses a selfie punch-hole camera in the center. It’s punchy – unsurprising given the AMOLED screen tech, and with HDR10+ credentials and a high refresh rate of 120Hz, it’s smooth too.

You can get a sharper screen for the price – especially if you opt for a last-gen flagship. That said, the GT Neo 3’s 1080 x 2412 resolution is sharp enough, and the phone gets nice and bright too.

With a front camera resolution of 16MP, matched with an f/2.4 lens and a 27mm focal length, selfies aren’t super-wide, so you may struggle to get loads of people in frame.

The Realme GT Neo 3 captures video at up to 4K resolution, 60fps. It also shoots RAW photos, and features a manual ISO of up to 6400, and a shutter speed as long as 32 seconds.

As for shooting modes, these include old favorites like Night, Portrait, Video, Photo, Pro Mode, 50MP, and more, as well as the semi-automatic Street Mode, for more creative shots.

Like past Realme phones, the GT Neo 3 boosts saturation and contrast. While this characteristic usually helps boost weak sensors and lenses in lower-priced or worse-specced Realme phones, in the GT Neo 3 it actually adds a zing to a high-quality image. There’s also a lot of detail you can salvage from shadows, which you’ll need to do as the camera can underexpose certain scenes.

The IMX 766 sensor captures plenty of detail, shooting photos at 12.5MP by default, and whether captured in bright or dark environments, it holds up well.

The Realme GT Neo 3’s camera captures high-contrast photos that are punchy but pleasing for anyone who doesn’t want to edit their pictures (Image credit: Basil Kronfli)

Optical image stabilization really helps the primary camera along at night, and shots of close-up objects pack a pleasingly shallow depth of field. We wish the ultra-wide, macro, and selfie cameras were as reliable as the primary camera. Frustratingly, low-light and handshake spell a soft or blurry picture across all three. Stick with the main camera though, and you’ll seldom be disappointed.

The only time we didn’t like what the main camera produced was when lighting was very harsh. This produced blown-out highlights and dark areas – the ugly side of Realme’s high-contrast processing.

That said, jump into the settings and activate 10-bit HEIF capture to increase the color range, and both Pro Mode and Street Photography modes support RAW capture, so enthusiasts who want to bypass Realme’s heavy-handed processing have options.

The main camera isn’t overzealous with its HDR effect even when the feature fires up (Image credit: Basil Kronfli / Digital Camera World)

We struggled when taking selfies on the Realme GT Neo 3. It took a super-steady hand to grab a sharp shot in all but the best lighting, and the portrait mode wasn’t super-flattering, oftentimes missing one or both of our ears .

Video capture on the GT Neo 3 is impressive, stable, and loaded with detail at up to 60fps in 4K. Where the camera system really misses the mark for a $750 device is that dedicated macro camera. In anything but optimal light, you’d be better deferring to the main camera.

Don’t be alarmed though, we had a great day-to-day experience with the GT Neo 3. Everything from apps through to multi-tasking, gaming, photo editing and even stitching 4K video clips together moved along swiftly.

Most notably, the phone stayed cooler than most flagships running Qualcomm Snapdragon 8 Gen 1 chips, including the Honor Magic 4 Pro (opens in new tab) and Xiaomi 12 Pro (opens in new tab). While it might miss out on some of the graphics grunt of competitors, therefore, the Realme GT Neo 3 might be the better option for gamers who like long bouts of button-bashing.

There’s an ample 256GB storage inside the Realme GT Neo 3, and this is matched with 12GB RAM.

Naturally, given the fact this is the world’s fastest charging phone, it powers up very quickly, taking the 4500mAh battery from zero to 50 percent in just seven minutes, and fully charging it in under 20 minutes.

The phone also lasts a comfortable day in real-world use unless you’re hammering the screen-on time, leaving us with between 10-25 percent by the end of the day.

We don’t always enjoy testing phones – but we really enjoyed our time with the Realme GT Neo 3. The novelty of its fast charging didn’t wear off – we found ourselves low on power a couple of times, and it was a serious treat to top up quickly and climb up to 80 percent in minutes before heading out.

The rest of the phone is also reliably good in most areas. Watching content on its glorious screen is excellent, its speakers are decent and the lightweight, curved chassis is also easy to slip in and out of a pocket despite the phone’s tall form.

Unfortunately, the ultra-wide camera is just fine, and the macro and selfie cameras aren’t great for the price. Yes, the primary camera is impressive, but it can be had for a lot less on the Realme 9 Pro Plus – a best-in-class phone that’s significantly cheaper.

So if you want lightning-fast charging and a decent primary camera phone, you won’t find anything that powers up faster than the GT Neo 3. That said, if you want a more traditional flagship-grade package, you might want to check out the Google Pixel 6 (opens in new tab)or even a last-gen phone like OPPO’s Find X3 Pro (opens in new tab).

Here Are the Cryptos That Are Generating Returns Despite Bear Market: Gnox (GNOX),…