Satoshi Nakamoto Net Worth—How Rich Is the Inventor of Bitcoin? 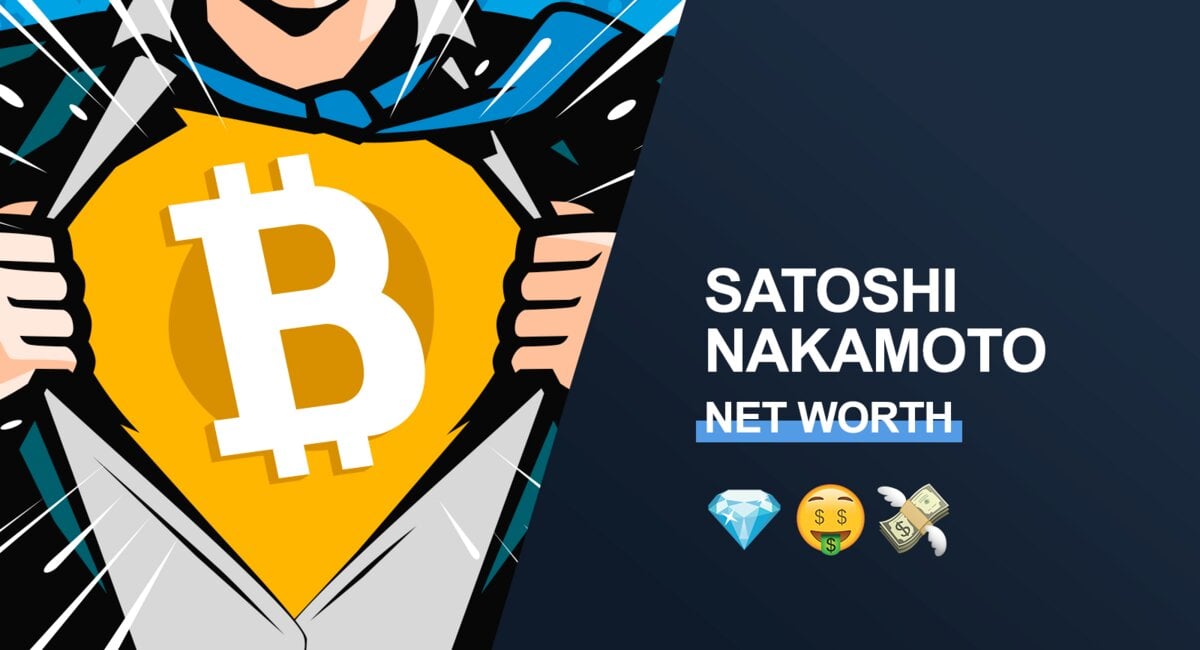 Bitcoin’s creator Satoshi Nakamoto is still shrouded in mystery, which is especially noteworthy given that his invention is now used across the globe and valued at more than $300 billion. As a result of Bitcoin’s massive growth, Satoshi is now among the 100 richest people in the planet. However, it seems that Satoshi has never sold any of his Bitcoin, and it’s not even clear if he is still alive.

We’ll be taking a brief look at Satoshi’s involvement in the Bitcoin project, explain how he amassed his BTC treasure trove and compare his wealth against other billionaires and famous crypto whales.

Who is Satoshi Nakamoto?

Satoshi Nakamoto is the pseudonym used by the creator of Bitcoin. So little is known about Satoshi’s real identity that it’s not even clear if the name refers to one person or a group of people. In fact, we don’t even know if Satoshi is still alive—if he is alive, he has shown a lot of restraint to not cash out even a small portion of his multi-billion dollar Bitcoin stash.

Satoshi Nakamoto released the Bitcoin whitepaper in 2008, and the Bitcoin network itself went live on January 3, 2009. Satoshi mined the first block on the Bitcoin blockchain, which is also known as the genesis block. He continued mining for some time after Bitcoin’s release, earning large amounts of BTC rewards.

For a period of time after the release of Bitcoin, Satoshi was actively discussing his invention with interested participants on online platforms, especially the BitcoinTalk forum. Satoshi’s last public communication came in December 2010. In April 2011, Satoshi clarified that he was no longer working on Bitcoin through email correspondences with Bitcoin developers.

Even though Satoshi hasn’t been involved in the Bitcoin project for more than a decade, Bitcoin users are reminded of his legacy on a daily basis. This is because every BTC coin can be divided into 100 million units, which are called satoshis. Often, Bitcoin users use the abbreviation “sats” to refer to satoshis.

Many researchers and journalists have analyzed Satoshi’s writings in an attempt to determine his real identity. However, no conclusive evidence has been found to link Satoshi Nakamoto to a real-world identity. Of course, many people have been singled out as potential Satoshi Nakamoto candidates, most commonly Adam Back, Nick Szabo and Hal Finney.

Some people, most notably Craig Wright, have actively claimed that they are Satoshi Nakamoto. However, their claims have largely been dismissed by the community, as no self-proclaimed Satoshi has been able to conclusively prove that they are indeed the inventor of Bitcoin.

How much Bitcoin does Satoshi Nakamoto have?

As we’ve mentioned before, Satoshi amassed a large number of BTC through mining in the early days of Bitcoin. Although we can’t know exactly how much BTC Satoshi was able to mine, the commonly accepted estimate is that he mined approximately 1.1 million BTC.

This is the estimate provided by cryptocurrency developer and expert Sergio Demian Lerner, who discovered the “Patoshi” pattern in Bitcoin’s early blocks. Lerner was able to estimate the number of blocks that were mined by Satoshi, so it’s also possible to estimate how many Bitcoins Satoshi has—about 1.1 million coins. This represents about 5.2% of the circulating supply of Bitcoin.

Satoshi Nakamoto was mining Bitcoin before the first Bitcoin halving, when the block reward was at 50 BTC. This, combined with the fact that there weren’t many other miners active on the network, allowed him to earn a truly massive amount of BTC.

What is Satoshi Nakamoto’s Bitcoin address?

Each of the block rewards earned by Satoshi was sent to a different address. Therefore, there are more than 20,000 different addresses holding Satoshi’s Bitcoin. The most famous is of course the address that received the reward from Bitcoin’s genesis block. Interestingly enough, the 50 BTC that were awarded for the genesis block are unspendable.

Occasionally, Bitcoin users send BTC to this “genesis address” as a tribute to Satoshi. A total of about 18.57 BTC has been sent to this address so far, on top of the 50 BTC genesis block reward.

Another notable address belonging to Satoshi is the address he used to make the first ever Bitcoin transaction between two users. On January 12, 2009, Satoshi sent 10 BTC to Hal Finney, a software developer who was one of the earliest adopters of Bitcoin.

Crypto market observers monitor the Bitcoin blockchain to see if any transactions are being sent from wallets that were active during the “Satoshi era”. However, there hasn’t been a single BTC transaction since Satoshi left the Bitcoin project that could be attributed to him conclusively.

How does Satoshi’s net worth compare to other billionaires and Bitcoin whales?

If we assume that Satoshi Nakamoto’s net worth is $18.5 billion, he would be the 86th richest person in the world according to Forbes’ real-time billionaires rankings. He would also likely be the richest person in the world of crypto, ahead of Binance CEO Changpeng “CZ” Zhao. The Bloomberg Billionaires Index estimates CZ’s net worth at $12.3 billion.

Satoshi is also likely the largest Bitcoin holder in the world. Here’s how much Bitcoin is held by some of the most notable Bitcoin “whales”:

*Figures are rounded for better readability. Data as of January 4, 2023.

The bottom line—Despite his huge net worth, Satoshi isn’t touching his BTC

Satoshi’s stash of 1.1 million BTC makes him one of the 100 richest people on the planet, but he seems content with just sitting on his pile of digital coins. The fact that Satoshi hasn’t moved any BTC coins in well over a decade is one of the main reasons why many people believe that he is dead.

Others argue that the reason why Satoshi isn’t selling or spending any of his Bitcoin is because he’s simply not concerned about his personal wealth and wants to maintain his anonymity. Whatever the real reason may be, we can still be grateful to Satoshi for his brilliant invention!

If you’re interested in the net worth of other famous crypto founders, check out our articles analyzing the wealth of TRON founder Justin Sun and Ethereum founder Vitalik Buterin.

By placing satellite in space, Cryptosat and SpaceX promote use of Bitcoin, Binance Coin, and other crypto