Student club is educating the world about Bitcoin 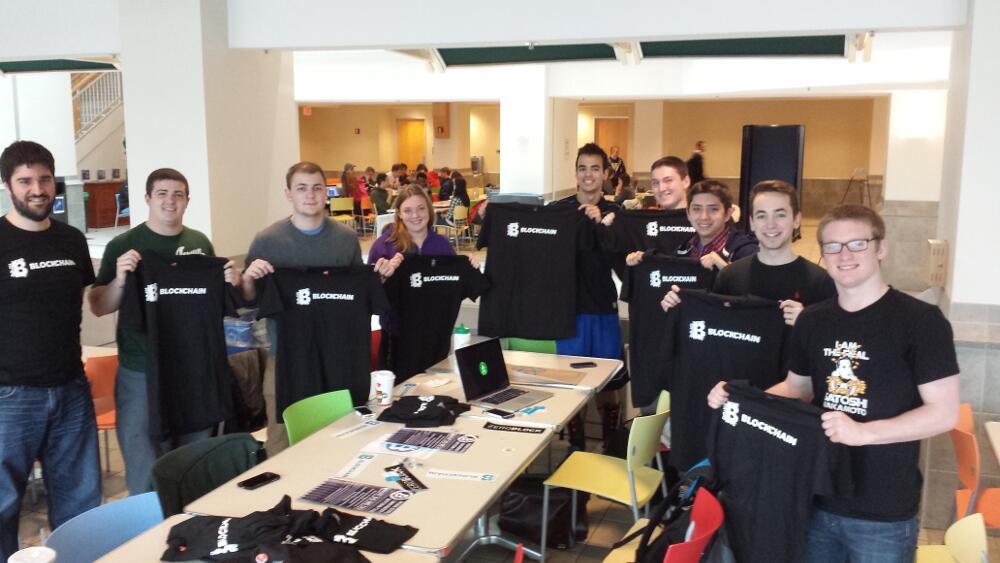 A shadowy figure looks first to his left and then to his right before slipping into the alley. Another figure, already there and waiting, pulls out his smartphone. After a few swipes and taps on the phone, the two exchange money and part ways.

The sale — far from being nefarious — was for Bitcoin, a type of digital currency.

It’s a type of transaction familiar to Patrick Cines, president of Penn State’s Bitcoin Club (PSBTC), which he co-founded in January with the club’s vice president, Ryan McCabe. The club has three main goals: educating people about Bitcoin, reaching out to local businesses that might benefit from using Bitcoin and helping philanthropy campaigns use the currency.

“Most Bitcoin transactions happen online, although they can be done in person for cash,” said Cines, a student in the Smeal College of Business. “Of course, even in person transactions have to be done on a laptop or smartphone.”

Cines created the club after finding his future vice president on Reddit, a social networking and link sharing site.

“I posted a picture of my mining rig and got a message from Ryan. We discovered that we both went to Penn State and decided to meet up,” said Cines. “Shortly after, we decided to form the club.”

They immediately got to work reaching out to the Penn State community, working to break down myths and assumptions about Bitcoin and how it works.

Bitcoin has a mysterious reputation. Most know that it can be used to buy things online, but as the currency rises in popularity, most don’t know much more than that.

The currency was developed and released in 2009 by a person or group of people under the pseudonym Satoshi Nakamoto — their real identity is unknown. People could either “mine” for the currency (digitally adding transaction records to Bitcoin’s public ledger) or find someone selling them for cash.

“Mining can be difficult to explain, but it’s one of the great things about Bitcoin,” said Cines. “You contribute to the ecosystem by processing transactions, and in return you’re rewarded. There’s no centralized regulation of Bitcoin — it’s managed by the people. It’s all very transparent.”

Bitcoin’s fan base was originally so small that each bitcoin had almost no value, but because interest and demand has risen, today the value has reached about $450 each. They can be sold for their equivalent in dollars or can be used anywhere Bitcoins are accepted as a form of currency.

“Some business owners are reluctant to accept Bitcoin,” said Cines. “So another of our club’s goals is to reach out to local businesses and show them the benefits of accepting bitcoins as payment.”

One benefit is that merchants will save money by accepting bitcoins through a service like BitPay, which charges a 0 percent transaction fee (compared to a credit company’s 3 percent). Business owners can also have the bitcoins exchanged for dollars and deposited in their accounts the same day, so there’s no downtime waiting for a transfer.

“Philanthropic organizations can save money the same way,” said Colin Earl, head of the club’s corporate relations. “If people donate with a credit or debit card, the same transaction fee is charged. If an organization accepts Bitcoin, more of each person’s donation can go to the cause.”

Individuals can benefit from Bitcoin, too. Cines explained that the currency can also greatly help international students, who often have to pay hefty fees on international transactions — and then have to wait several days for them to be approved. Bitcoin transactions have the same cost for everyone, regardless of location, and are nearly instantaneous.

The international connection Bitcoin offers was reinforced for Cines recently at the Inside Bitcoins conference in London, a trip he won after participating in a contest on Twitter in which he talked about his desire to help students in other countries form their own Bitcoin clubs.

Earl also helps extend the club’s reach by participating in the College Crypto Network, an organization that brings together Bitcoin clubs from around the world and helps new ones begin. Earl also speaks to the Penn State club’s partners and sponsors, which include such Bitcoin service websites as Blockchain, BitGive and GoCoin, among others.

“My goal is to reach out to corporations and groups that can give us exclusive deals and help get our name out,” said Earl. “We also like to try to get speakers to visit the campus and speak. Last semester we got Blockchain to come in, which was great.”

One deal Earl is working out is with Circle, an online digital currency company that makes it easier to store, send and receive bitcoins. Earl says that when the full version of the site is made public, every Penn State student that signs up will receive $10 in bitcoin. Earl hopes deals like these will both raise awareness and make starting out with Bitcoin a little easier.

More awareness, and also less of a need for back alley transactions.

For more information, go to http://psubtc.com.

For more IT stories at Penn State, visit http://news.it.psu.edu.