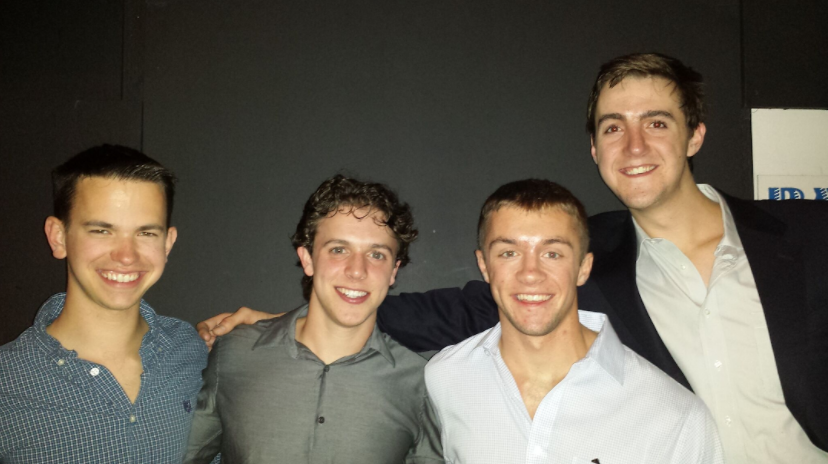 In the winter quarter of 2013, Stanford officials were perplexed that 10% of the energy used in a 100-person dorm seemed to be consumed by one room. They kicked down the doors and walked in to find a room hotter than a sauna, with machines and equipment whirring – students had put together a Bitcoin mining rig in their dorm room. The first wave of Bitcoin mania was sweeping through Stanford.

Bitcoin early adopter and venture capitalist Tim Draper gave an evangelical talk at Stanford later that year. It was not uncommon in a classroom to see students day trading Bitcoin instead of taking notes. Though it was not at the price point or hype level it is at today, interest in the currency was spreading like wildfire. Flash forward five years, and these former freshman and sophomore crypto enthusiasts are now CEOs of their own crypto companies – the Stanford Bitcoin Mafia has been formed.

At the heart of the 2013 Bitcoin craze at Stanford was the CS 184 class taught by Andreessen Horowitz partners Balaji Srinivisan and Vijay Pande. Srinivasan later went on to found Earn, formerly 21.co, a Bitcoin startup with $115 million in funding that monetizes email and social media accounts. Srinivasan’s first iteration of the class in 2013 focused on a mix of startup theory and practice, interspersed with various Silicon Valley power players as guest lecturers. While not the focus of the class, Bitcoin was covered and became a huge point of discussion in the class’ bi-weekly hackathons. From the hackathons, the Stanford Bitcoin Group was born, a Bitcoin research team supervised by Srinivasan and Pande.

“For CS 184, you could optionally show up in the engineering building at 6pm on Thursday and just work on projects together,” Andy Bromberg said, CEO of CoinList, an AngelList spinout that catalogs tokens. “The group that ended up being the Stanford Bitcoin Group typically stayed until 6 in the morning, working all night together on things. Discussion would separate from the projects we were working on in class, and start digging into other things, like Bitcoin or other futurism projects. That’s where we really bonded. Late nights, early mornings.”

Other crypto founders like Nadav Hollander of Dharma Protocol were students in the class, but the Stanford Bitcoin Group consisted of seven core members. In addition to Bromberg, the group included John Backus and Alain Meier, founders of Bloom and Cognito, Ryan Breslow, founder of Bolt, Chris Barber, an investor, Matt Rials, a developer at Coinbase and then Netflix, and Pat Briggs, a developer at Google. The students were mentored by Srinivasan and Pande in a variety of Bitcoin related projects. Research consisted of Bitcoin trends and trading volumes, analyzing the Bitcoin protocol, and even exploring how Bitcoin could have affected economic disasters in countries like Greece. There was also a lot of effort put into the evangelical side, teaching people how to use Bitcoin and showing them that it mattered. “Right now it’s lots of forking, lots of different camps,” Breslow said. “There was a lot more alignment back then, a focus on making Bitcoin popular. It was a bit more altruistic.”

As part of their evangelical efforts, Breslow attempted a Bitcoin drop at Stanford, trying to emulate the MIT Bitcoin Club who gave $500,000 worth of Bitcoin in 2013 to undergraduates across campus, worth millions now. However, he abandoned the idea after running into complications with the Stanford bureaucracy. Despite their extensive research, the Stanford Bitcoin Group never formally published anything, as there was simply no interest from the public. According to Breslow, “99/100 people you brought Bitcoin into conversation with had never heard of it.”

When it came to housing for the following year, Barber spearheaded an effort with members from the Stanford Bitcoin Group to make an entrepreneurship themed dorm room. Barber recruited Backus, Meier, and Breslow from the research group, adding on entrepreneurial friends Jesse Leimgruber and Daniel Maren for the six person dorm room. Leimgruber and Maren later joined Backus and Meier in the founding of Bloom, a cryptocurrency startup that seeks to create the first decentralized credit score. In Suites, a dorm at the edge of Stanford campus, Griffin 304 was born. Bromberg also lived at Suites in a room next door.

“I came across a group that all seemed destined to start a startup,” Barber said. “Those were the people I wanted to be surrounded by. I’m a big proponent of ‘You’re the average of the five people you spend the most time with.’ There were about 10 undergraduate dropout Stanford founders over that few year period when we were in school. 5 of the 10 were from Griffin 304. It didn’t seem to be a coincidence.”

By the time sophomore year had started in the fall of 2013, Maren had already dropped out to found DFly, a solar power electronics startup that was acquired by SunPower. Maren is now an advisor to Bloom, as well as the founder of Hypernet, a company that seeks to solve computationally intense problems by pooling together the power of idle devices. By the end of the school year, only Barber would remain a student, the rest dropping out to pursue startups. The environment at Griffin 304 was collaborative, competitive, hard working, and fun. The most discussed topic, of course, was Bitcoin.

Jesse Leimgruber works on his computer in Griffin 304, a dorm room that housed many… [+] entrepreneurially minded students.

“We would stare at the price of Bitcoin on a monitor in Suites,” Leimgruber said. “We all had a lot of bitcoin. We did a bit of trading between coins, but mostly we just held. Occasionally, we would stare at the price and say ‘Hey it seems a little high right now, I would sell right this second.’ And then we would look at the price change, and say ‘Hey we should buy right now. Aha! We would have made some money.’ We were bitcoin maximalists, there were a whole bunch of other coins like Dogecoin and even Ethereum at the time, which came the year after. No one really believed in anything besides Bitcoin.” Now, however, Leimgruber is an Ethereum maximalist, building on top of the platform and keeping much of his personal holdings in the token.

Between following Bitcoin and pursuing their startups, Griffin 304 had little time for school, but took as many CS classes as they could anyways. The quirky group of startup kids were highly nocturnal, working on various side projects and blasting dubstep until 4 AM. Leimgruber subsisted mostly on trail mix, taking buckets back to their room from the dining hall downstairs. Everyone was a natural prankster. As the year went on, however, they started dropping out like flies.

Breslow dropped out second after Maren, leaving to build a Bitcoin wallet company. He made a clone of his key, however, and lived in Griffin 304 for the rest of the year, keeping a blanket and backpack in the room. He spent spring quarters at Stanford not taking any classes, coding 12 hours a day, and using the Stanford gym and dining halls. His current company Bolt is an end to end payments company.

Next came Leimgruber, who dropped out and worked on a couple bitcoin startups that did not gain much traction. Leimgruber then attended the Alchemist Accelerator and founded NeoReach, a data analytics company that connects brands with influencers. Though Leimgruber still works with NeoReach, his main priority now is Bloom. Bloom completed its ICO on January 1st of 2018, having raised over $40 million in Ethereum from over 7,000 individual holders.

Bromberg dropped out next, finding Sidewire with Tucker Bounds, the former spokesman of John McCain’s presidential campaign. Sidewire sought to connect readers directly with political experts, filtering out much of the noise associated with mainstream publications. Sidewire never reached the readership it wanted, however, winding down in mid-2017. Bromberg is now the CEO of CoinList, an AngelList spinout where the top ICOs are vetted and hosted. CoinList helped coordinate the Filecoin ICO that raised $205 million.

Meier and Backus dropped out after Bromberg, founding Cognito, formerly known as BlockScore. Cognito went through Y Combinator and successfully raised funding, acting as an identity verification and anti-fraud tool. Cognito has helped many big crypto exchanges with compliance, and the two are now part of the founding team of Bloom along with Leimgruber.

Barber, the last man standing in the suite, did not drop out to found a startup. Instead, he was the “mini-VC of Stanford land” as Leimgruber describes it. Barber partnered with angel investor Matt Mochary, investing Mochary’s money at Stanford, with Barber getting 10% of all returns. Barber’s first few investments were easy: Meier and Backus’ Cognito, Leimgruber’s NeoReach, and Bromberg’s Sidewire. After graduating, Barber created Breakout List, a popular website that ranks high growth startups to help software engineers find the next big company to work at.

By the end of the year, the group had gained some notoriety, appearing in a Reuters profile in 2014. Leimgruber and Backus were also awarded the Thiel Fellowship, a prestigious $100,000 grant from tech mogul Peter Thiel. 20 to 25 Thiel Fellows are selected each year, and the award is given with no strings attached or equity taken.

“Virtually everyone in the current batches has raised substantial amounts of funding or been acquired or are working on really massive scale projects,” Leimgruber said. “They fly everyone out once or twice a year to a retreat that is wonderfully organized. People are really open, the support you get from other entrepreneurs is really solid. It’s the only real group that isn’t focused on the company. It’s focused on the individual, because they don’t take equity.”

Many influencers in the crypto space have been Thiel Fellows, including Ethereum founder Vitalik Buterin, Augur founder Joey Krug, Aragon founder Jorge Izquierdo, state channel developer Liam Horne and Gems founders Rory and Kieran O’Reilly. That the Thiel Fellows and the Stanford Bitcoin Mafia are so interrelated is an embodiment of a larger movement happening within tech. The upstart, young crypto folks are gaining traction, and they also happen to have more money than they know what to do with.

“I’ve got friends who were sleeping on couches a year ago. Many didn’t join crypto for the money but have now found themselves with five, ten, twenty million dollars worth of crypto,” Leimgruber said. “It’s really shaken up the space in a crazy way, because Silicon Valley has always had a young culture, but crypto is a new level. You go to any conference, almost everyone is 30 or under. And there are now tons of young people who have found themselves rich, with millions in capital to invest early and fund projects. This is why we see projects raising Series B, Series C levels from the get go. Million dollar deals are getting done on handshakes over dinner all the time.”

On December 12, Vitalik Buterin tweeted, “So total cryptocoin market cap just hit $0.5T today. But have we *earned* it?” The ultra young, deeply interconnected group of crypto upstarts are now paper millionaires. If they can use this newly minted wealth to create long lasting companies and make society a better place remains to be seen.

Bitcoin Is A Movement For Financial Freedom