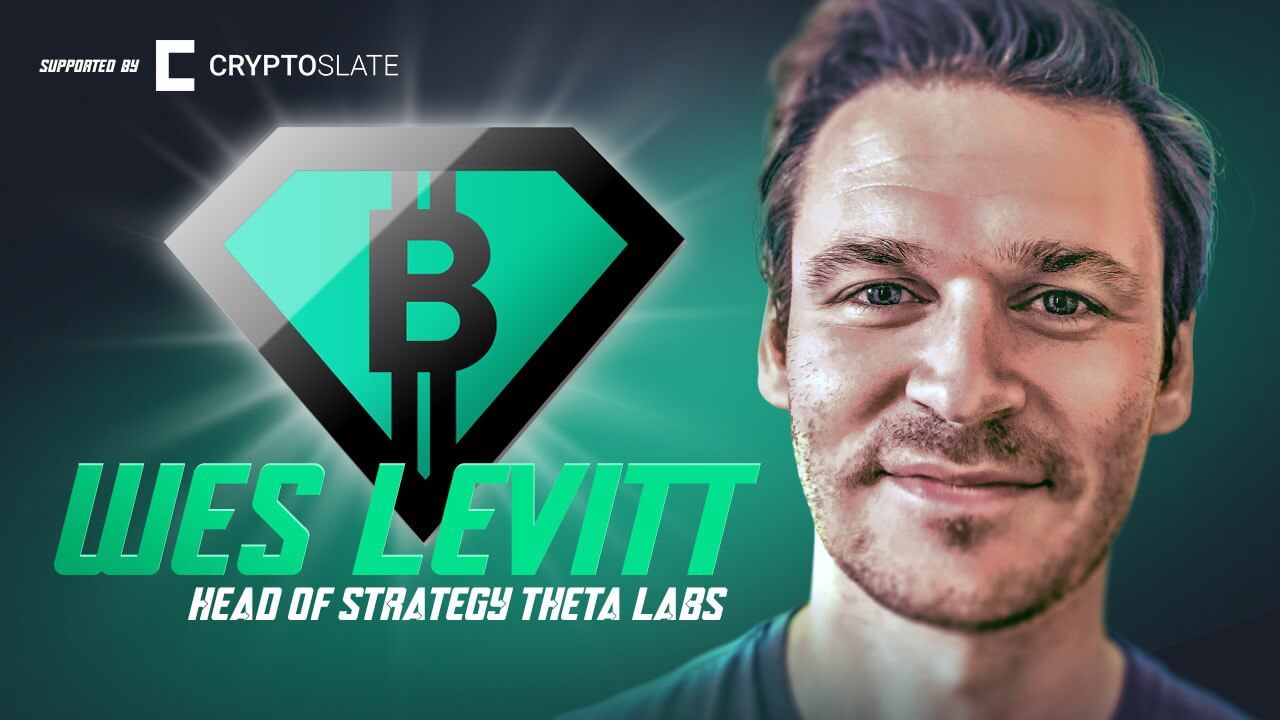 Theta is an open-source protocol purpose-built to power the decentralized streaming network and will allow for vertical decentralized apps (dApps) to be built on top of the platform to enable esports, music, TV/movies, education, enterprise conferencing, peer – to peer streaming, and more.

Today, Theta Labs’ Wes Levitt caught up with Cryptonites host Alex Fazel for an online tête-à-tête on all topics crypto, blockchain, Theta’s future, NFTs, the utility of DeFi protocols, and much more.

Wes looks after corporate strategy, marketing, and press relations at Theta Labs. He earlier spent eight years in investment roles at real estate firm Mosser Capital and mortgage real estate firm Redwood Trust. Wes is a CFA charter holder, has a BS in economics from the University of Oregon, and holds an MBA from the Haas School of Business at the University of California, Berkeley.

Levitt kicked off with a bit about what attracted him to the blockchain space in the first place, away from a cushy job in traditional finance. “I don’t think there’s a specific thing. You saw all these disparate groups, from the business folks who wanted to get into it, to the computer science people saying it actually has a lot of significance from a technical perspective…like everyone is realizing the potential of this,” he shared.

Theta Network has two tokens—THETA and TFUEL—that operate on and allow users to interact with its protocol. And while Theta fans may know they work entirely, the newcomers could get a tad bit confused.

But Levitt has a simple explanation for how they both work: “The two tokens are these core tokens. Native to the data blockchain data is the staking token. THETA is a proof of stake blockchain, technically a partial BFT variant. And then Theta Fuel, or TFUEL, is sort of the transactional or gas currency of the protocol.”

He added, “So anything that happens between, say, like you and I are watching the same video stream and I’m relaying videos to you. Underlying the protocol, you’re paying me micropayments and TFUEL Or if you launch a smart contract, either to launch a brand new token on a blockchain or to create an NFT then the gas is paid in TFUEL.”

“So pretty much everything outside of staking everything that happens as a transaction on the blockchain is TFUEL. The value of that is, you know, pretty clear if you’ve ever used Ethereum, that it’s the gas that makes everything work and what rewards validators,” said Levitt.

“The value to theta is that if you stake then you participate in block production, you earn THETA tokens as a reward, and then as the governance becomes more decentralized, those data tokens that you’re staking are your ticket to basically have a vote in how the protocol develops,” he ended.

NFTs have turned into a big theme of the crypto market, surging to a $25 billion market cap in recent times from a small sub-$100 million market in 2019. But with sales figures already dropping, the one question on everyone’s mind is what happens to the NFT market moving forward?

Ask Levitt, and he says the game is just starting. He adds NFTs have their own distinct types these days and some might flourish more than the others as the market evolves.

“It depends a lot on which types it is because it seems to get kind of generalized altogether, [as] there are a couple of different distinct ones,” says Levitt.

He notes, “There are your collectible art pieces where you got something from Christie’s. It’s like a million-dollar piece of art or more being tokenized. Then, you have others that are more like what we’re doing with WPT or NBA top shot where it’s specifically as part of like video content, being tokenized, or like the streamers that we have on our platform, like an Esports streamer that has a moment that they want to capture and tokenize.”

“We’re definitely leaning on that one more heavily because video streaming is sort of in our DNA. So that makes sense to us. And our relationships with streamers and content companies, you know, kind of fed us right into what they like. So I think they’ll definitely be different forms the way it goes out,” he adds.

(Check out the rest of Levitt’s thoughts on crypto, NFTs, Theta Network alpha, and much more in the Cryptonites episode, available for streaming in full right below!)

Bitcoin can revolutionize the dynamics of the monetary system.

Theta Price Prediction: THETA Coin Price Is Ready For A Recovery Above $1.5