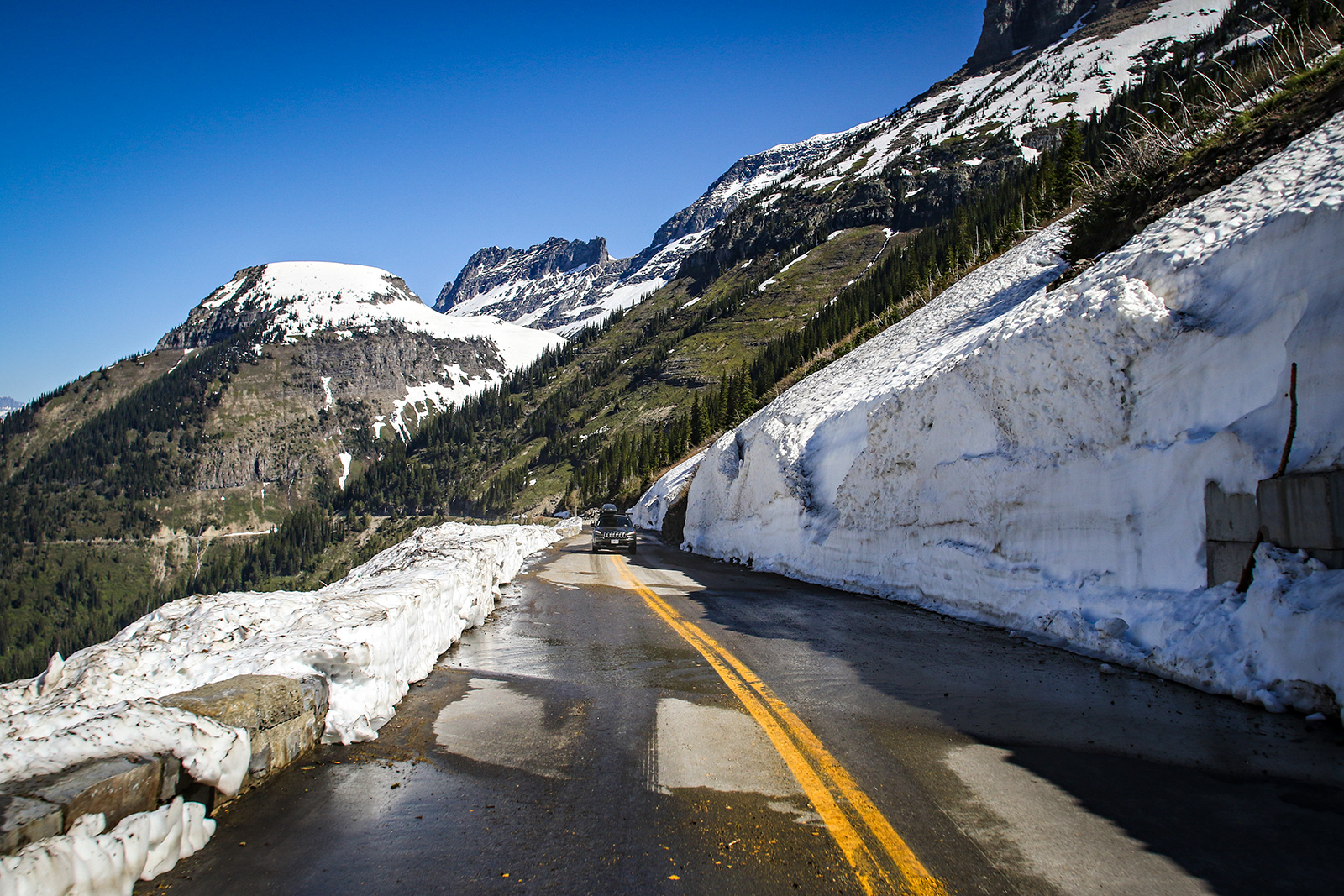 Every workday, Gabrielle Antonioli wakes up at 3:30 am in her employee housing in West Glacier. She’s at her computer by 4 am and looks at data and models from various weather stations in Glacier National Park.

The National Park Service (NPS) hired Antonioli this year as a seasonal avalanche forecaster where she works from April to June, forecasting avalanche conditions for park employees. Their main responsibility is to keep the Going-to-the-Sun Road crew safe while they plow the road crossing the Continental Divide at Logan Pass.

After writing the forecast, Antonioli heads to the road crew office for a daily briefing at 6 am to go over the avalanche conditions with the plow drivers. By 7 am, the forecasters drive their government vehicles behind the plow drivers, eventually parting ways to park and put their skins on their skies to assess hazards in the field and acting as a spotter at each avalanche path for the road crew while staying in constant radio communication.

“It’s different than other forecasting because you’re making the call for other people instead of giving them a product for them to make their own decision,” Antonioli said. “Recreational forecasters can choose their own terrain and we are entering the terrain the plow drivers are entering. Often, it’s hazardous terrain for skiing. There may not be a plow-sized avalanche that day but there are definitely human-sized avalanches.”

Park officials launched the avalanche hazard forecasting program for snow removal operations 20 years ago for the nearly 50-mile Sun Road to ensure the safety of the road crew. The NPS partners with US Geological Survey (USGS) snow scientists to forecast for the equipment operators who remove snow from the top 14 miles, which has high exposure to avalanche hazards, including several destructive avalanche paths.

Plows move beneath westside slide paths, including Haystack Creek, Big Bend and Triple Arches and The Garden Wall along the Continental Divide.

The program was initially launched for park employee safety, but as the Sun Road becomes more trafficked in the early season with cyclists, the park service has expanded the program to help keep visitors safe, and now they provide forecasts on the weekends.

In 2019, an avalanche near Triple Arches left 13 cyclists stranded on the Sun Road on Memorial Day. Another avalanche in 2021 left a party of cyclists trapped between two avalanches near the same slide path.

“This year is the first that we officially had a forecaster on duty every weekend,” said Erich Peitzch, a USGS snow scientist who manages the park service’s avalanche program with the Northern Rocky Mountain Science Center. “That arose with the safety division with the park rangers because the past couple years there have been incidents with cyclists being trapped between avalanche debris.”

Anecdotally, Peitzch says e-bikes are allowing cyclists to venture further up the road and access is becoming easier.

According to a USGS report published in 2004, a few fatal avalanche incidents had occurred during the 1950s and 1960s involving plow drivers. In May of 1953, a slide caught four park employees, killing two of them, who were clearing snow after a storm and one employee survived a seven-hour burial. In 1965, a bulldozer and operator triggered a wet slab that carried them off the road, injuring the driver. Other incidents have resulted in buried machinery and costly infrastructure damage, including a slide in April of 1991 that caused $150,000 in damage to the road.

Peitzch remembers a massive avalanche that ran 4,000 vertical feet in January of 2009 in the Little Granite slide path, damaging the upper road, destroying much of the forest, and hitting the lower road.

“It mowed down a very mature forest and it made its way all the way down to low angle terrain,” Peitzch said. “We skied into it that April and the pile of snow was still 20 feet.”

For Antonioli, she feels lucky to have a forecasting position where she collaborates with snow scientists with USGS to deliver a forecast for the NPS. Before she was hired, she volunteered with forecasters for three seasons on the Sun Road while she worked toward a master’s degree in snow science at Montana State University.

This year, his team is collaborating with professionals at Montana State to experiment with remote sensing technology to evaluate snow surface deformation and its relation to glide avalanches.

“The whole point of this research is to help improve the program,” Peitzch said.