What Happens To Bitcoin When You Die – Bitcoin Magazine 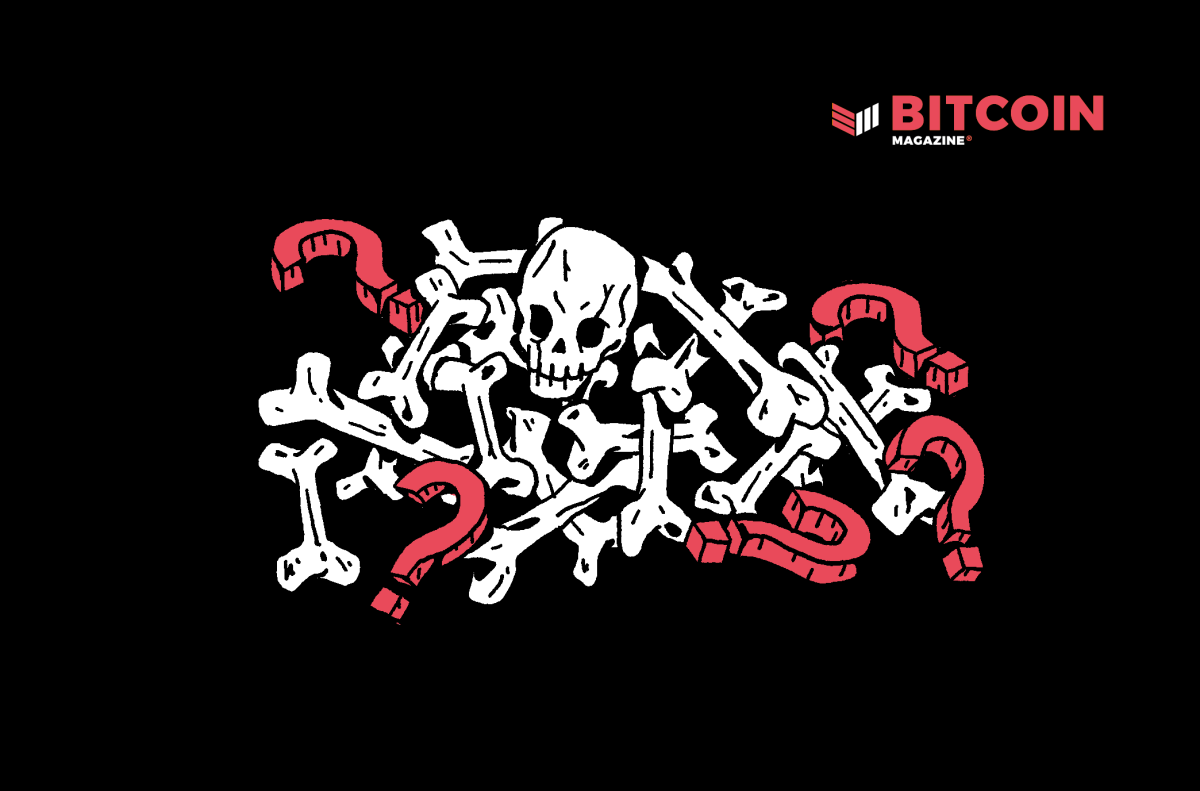 This is an editorial opinion by Jenna Bunnell, senior manager for content marketing at Dialpad.

No matter what your opinions are on bitcoin, it is obvious that it is here to stay and will continue to grow in use.

As a virtual peer-to-peer currency bitcoin has become widely accepted in many countries. You can sell your bitcoin for cash, or trade them with peers across different networks and use it to invest in anything from art to property.

However, as it is a virtual currency, the question arises; what happens when you die? While it’s a morbid thought, it’s important to plan ahead for your family and loved ones. So, what happens to bitcoin when you die and how do you include BTC in any inheritance plans? Is it a simple process to include BTC in a will like you would with tangible assets such as your house and your bank accounts?

The origins of Bitcoin lie way back in 2008 when a white paper was released titled “Bitcoin: A Peer-to-Peer Electronic Cash System” authored by Satoshi Nakamoto (a name assumed to be a pseudonym, maybe even belonging to more than one person ). The idea behind the white paper was to create a fully digital currency that would exist outside the normal centralized controls of banks and governments.

At its core lies peer-to-peer software and the use of high levels of encryption (based on the SHA-256 algorithm designed by the US National Security Agency). All transactions are recorded in publicly available ledgers on servers around the world and anyone with a computer can set up one of these servers, known as nodes.

Every time a transaction happens, it is broadcast to the entire network and shared between nodes. These transactions are collected, roughly every 10 minutes, into a block and added to the blockchain.

People often have the misconception that they need to buy whole units, but BTC can actually be subdivided by up to seven decimal places, creating smaller and more affordable units — sats.

Once you have bought (or mined) bitcoins, then you keep them in a digital wallet which you can access using special software. Given that these coins do not exist in real life, and that ownership is based on agreement among members of the network, just how do you decide what happens to bitcoin when you die? Moreover, as many BTC owners memorize the key to their wallet and keep no other records, what happens if they suddenly die? 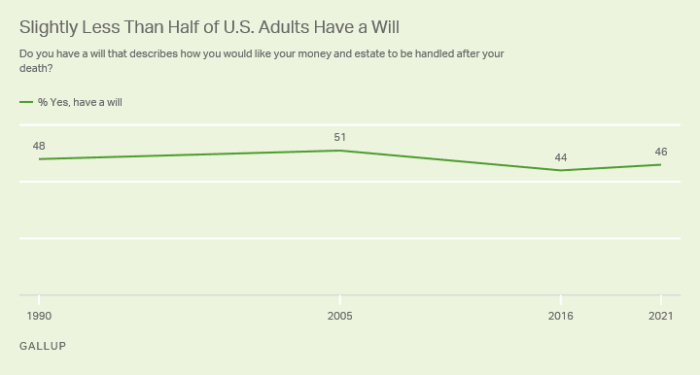 It’s not the most pleasant thing to talk or think about, but death is inevitable. Less than 50% of adults in the US have already made a will, though of course, this figure varies across age groups — over 75% of people over 65 have made one while only 20% of people under 30 have made a will.

From a legal perspective in the US, it can be quite confusing. The IRS doesn’t view cryptocurrencies as currencies but rather as tradable commodities that can be taxed by the relevant authorities. Yet we treat them as assets too, and thus must have some form of legal control when it comes to inheritance.

That control or oversight comes from the Revised Uniform Fiduciary Access to Digital Assets Act (RUFADAA). This law was developed so as to provide relevant parties (such as lawyers or fiduciaries) with clarity and a legal way of dealing with any digital assets held by a deceased person’s estate (or indeed when a person is incapacitated).

The law was written by the Uniform Law Commission (ULC) so that states could then examine it and adopt it. As of 2021, 47 states had enacted the law. So, for the US at least, there is a framework that governs management of digital assets, something that will come as a relief to many who were previously unsure.

You have to first consider that there are three groups of people who have a vested interest in what happens:

The major obstacle faced by the law was that, unlike physical assets, there has always been a degree of secretiveness around digital assets. In the early days, there were no laws that clarified access to those digital files and wallets in the event of death or incapacitation. If the original owner of the digital assets had not left a note of how to access those assets, then the sad reality is that they could be lost forever.

It is important to note that RUFADAA doesn’t focus purely on cryptocurrencies, but on all digital and online assets. That includes things such as Facebook or Google accounts. Custodians have certain rights as to what they can release or whether they request a court order to turn over access and/or information. In the case of things like Facebook accounts, the custodian can also decide what is “reasonably necessary” when it comes to releasing any info. 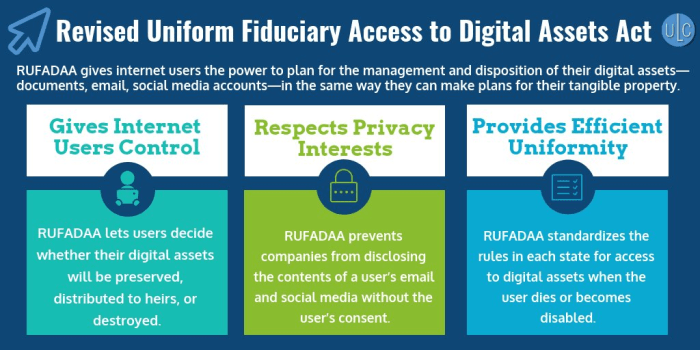 RUFADAA only applies if the original owner has authorized access to their bitcoin. This may be through documents signed with and held by the custodian or it could take the form of a legal document such as power of attorney, a will or a trust document.

A custodian can also limit how much access your fiduciary has, usually to only include aspects that let them carry out their responsibilities. The custodian also has the right to levy administrative charges for any access they provide. This can be important info if you’re trying to decide what happens to bitcoin when you die.

One of the main benefits of RUFADAA is that it clarifies the legal hierarchy when it comes to documentation — and later distribution — of your digital assets. The custodian (or online management system) is viewed by RUFADAA as the highest authority when it comes to ownership of a cryptocurrency account.

What that means in reality is that if you made Person A the beneficiary to your digital assets in a document with your custodian, then that document takes precedence over other legal avenues such as wills, POAs or trusts. If you have no beneficiary agreement with your custodian, then ownership will go to anyone named in those normal inheritance documents.

Should a scenario arise where there is none of the normal agreements nor a custodian agreement, then any transfer of ownership or fiduciary responsibility may be established by the custodian’s own terms and conditions.

What Should You Do? 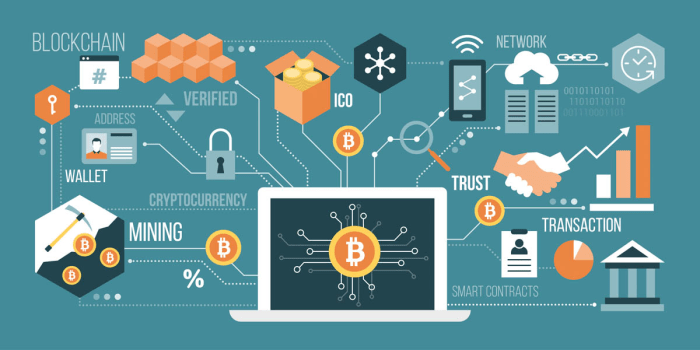 You have two main choices when thinking about what happens to bitcoin when you die.

You can either ask your custodian if they have specific tools or a framework for naming a beneficiary to your account, which would only apply if you held your bitcoin on an exchange — an unrecommended practice. Your other choice is to go the traditional route and name any beneficiary to your BTC in a will, a trust document, under POA or in estate documents.

If your estate includes BTC (or any other cryptocurrency) then you should consider a plan that includes all aspects of your digital assets. This means having a way of passing all details such as account details, keys and access to any hardware wallets to the person you want to inherit those assets or to your fiduciary/attorney.

In any will or similar document, you need to include directives for passing on any data, especially the most sensitive data associated with the account. Just passing on the hardware device used is likely not enough for the beneficiary to take control of the account.

Despite its growth, many people still question whether BTC is a real currency. Yet the growth, and figures very much show that it is something that is here to stay.

You should think of any bitcoin you own as an asset; it may not be a physical one like your house or car, but it still has real value. So, you should carefully consider what you want to happen to your bitcoin in the event of your death or incapacitation. Knowing the steps to take and what happens to bitcoin when you which means your assets can be passed to the beneficiaries you want.

This is a guest post by Jenna Bunnell. Opinions expressed are entirely their own and do not necessarily reflect those of BTC Inc or Bitcoin Magazine.