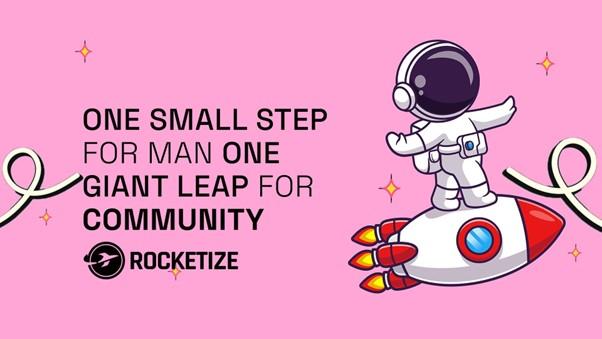 Dogecoin (DOGE) is the earliest meme coin to be introduced to the cryptocurrency market. It was able to achieve success because it took advantage of a market niche that had yet to be filled at the time. Now, several new meme coins have launched that are looking to emulate the success of Dogecoin.

Can Rocketize Token Help Your Portfolio To Take Off?

Rocketize Token (JATO) is a crypto meme project focusing on a host of blockchain capabilities, including a cross-chain decentralized exchange (DEX) and non-fungible token (NFT) capability supported by a native NFT marketplace and NFT minting and trading functionalities. Rocketize, which is powered by the native deflationary digital currency JATO, is built on top of the BNB Smart Chain (BSC).

What is it, how do I buy it and can Dogecoin make me rich?

The Rocketize team combines DeFi and decentralized autonomous organization (DAO) principles to create non-traditional incentive structures that allow users to produce revenue by actively engaging in the Rocketize ecosystem or just holding the native asset JATO. Rocketize’s active community, The Atomic Nation, aims to serve as the cornerstone of its founders’ objectives to attract the attention of various influencers and the media. They believe that this attention may pave the way for collaboration with significant international organizations.

Due to the decentralized structure of the DAO under which it operates, users have a voice in how the Rocketize Token system is administered. Users may freely buy, sell, and trade cryptocurrencies from other networks using a decentralized exchange.

Ironically, Dogecoin (DOGE) began as a cryptocurrency that was purely made for a laugh, as it was based on the ‘2013’ doge internet meme. Many crypto experts questioned whether Dogecoin would have long-term viability due to its satirical and lighthearted approach to digital finances. However, DOGE proved the skeptics wrong after it quickly rose to prominence in crypto trading due to its humorous appeal that reaches outside of the core Bitcoin audience.

Dogecoin is mostly used as a tipping mechanism on Reddit and Twitter to reward the creation or sharing of high-quality content. Joining a Dogecoin club or using a Dogecoin faucet might provide you with free Dogecoin. Its success might also be attributed to Elon Musk’s support, who has declared his interest in the currency. Dogecoin is currently listed as the ninth most valuable cryptocurrency by CoinMarketCap. DOGE’s popularity demonstrates that meme currencies are no longer a passing joke, but rather a dominant cryptocurrency that has pioneered the wave for a new sector in the market.

Similarly, to Bitcoin, Dogecoin has an automatic advantage over other meme coins due to being the first one to emerge in the market. Other canine meme tokens such as Shiba Inu (SHIB), Floki Inu (FLOKI) and Baby Doge (BABYDOGE) have all emerged due to the success of Dogecoin. However, none have managed to exceed it due to its strong community. With the several distinct features that Rocketize Token brings to meme coins such as its community governance and NFT minting, JATO does indeed have the potential to exceed Dogecoin if its momentum continues.

Find Out More About Rocketize (JATO) In The Links Below:

Do the sharing thingy

Analytics Insight is an influential platform dedicated to insights, trends, and opinions from the world of data-driven technologies. It monitors developments, recognition, and achievements made by Artificial Intelligence, Big Data and Analytics companies across the globe.

LUNA’s Do Kwon says he is not in hiding after Interpol issues red warrant; Miners abandoning POW tokens

What is it, how do I buy it and can Dogecoin make me rich?